The Secret Life of Walter Mitty

Walter Mitty is a thirty-something office worker – an employee at Life magazine. And to say he’s a daydreamer would be the understatement of the century. In fact, his imagination bursts into action rather too frequently, causing him to zone out at any given moment as he gets lost in his own little world.

One day, photojournalist Sean O’Connell sends the magazine a batch of photographs; one of which he says captures ‘the quintessence of Life magazine’ and should be used for the cover of the magazine’s final issue. But there is one major flaw – photo no. 25 is missing. The only singular photograph that will seal the reputation of Life. And it’s gone.

Walter works in the negative assets department of the magazine, and has never lost a single photo in his entire sixteen-year employment. He is suddenly thrown into panic situation when his bosses demand the photo immediately – but he cannot provide it. So what is a man to do?..

Using the the other negatives as clues, Walter goes in search of Sean O’Connell and the missing negative. But the journey he is about to embark on will teach him how to find himself, as well as the photograph…

The first thing I noticed about Walter is how long his daydreams go on for. The opening scene sees him rushing to work one morning, and having an imagination ‘episode’ whilst at the train station. It consists of him pouncing sideways into a burning building to rescue someone’s dog.

When he arrives at work and begins sifting through photographs, the clock says 09:20 – normal offices start at 9:00 so perhaps the clock on the wall was quite relevant; showing the timescale of Walter’s moments of escapism. Length aside, these scenes were fantastic. We are thrown from everyday life (like walking along a pavement) into a superhero-style scenario where only speed, strength and epic scale are important.

At first, Walter’s daydream scenes got a “what the fuck?!” reaction from me – even though I’d seen the trailer – it was still surprising. But then after the second or third scenario, the surprise element is lost and I became fully aware that the crazy thing happening was in the character’s head and not actually happening. It is kind of fun however, guessing if what is happening is actually happening! You’ll notice a few of these moments along the way. 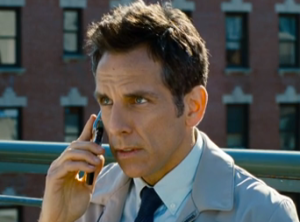 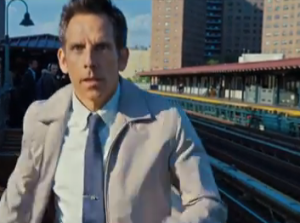 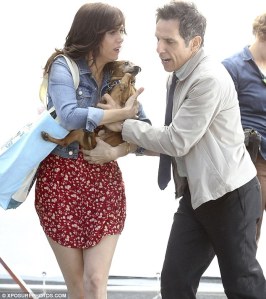 The opening credits are a nice little effect (names of production crew written out across bridges, pavements, etc.) and give way to a movie which bubbles with special effects and nice graphics.

Walter’s daydream sequences are that of a superhero movie (think Avengers Assembled), with just as many explosions, running up walls, and yelling wisecracks from a super-speed vehicle. Yes, Sliding Doors meets Spiderman as everyday situations (like sitting on a wall talking to a work colleague) erupt into incredible scenarios such as an epic car-chase, superhuman fights, and swinging from skyscrapers. 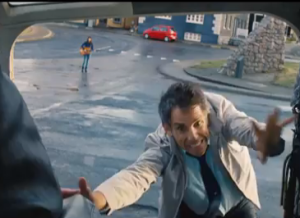 Filming this movie must have been an amazing experience due to the beautiful scenery; a holiday as well as film production. The locations used in The Secret Life of Walter Mitty included Seyðisfjörður (East), the Stykkishólmur village, the Snæfellsnes peninsula, and the coast of Garður on Reykjanes Peninsula. East, west and southwest of the giant ice-cube, basically.

It is breathtaking, and definitely one of this movie’s best elements. Vast grass-topped mountains, choppy, emerald-coloured seas and gushing waterfalls are just a small part of what makes it an incredible sight. During his adventure to locate the photojournalist, Walter visits Greenland and Iceland. Two of this planet’s most beautiful countries – you’d think there would be nothing there to look at.. but as Walter jumps from helicopters and climbs mountains, we come face to face with sheer beauty.

Having been to Iceland myself a few years ago, I know what its like. Practically a different planet. And I was reminded as I watched this movie just how otherworldly the place is. So to clarify, if you like a bit of scenery – you may just love parts of this movie.

Nuuk airport also features, and is a funny little scene where Walter’s airplane lands and it appears the craft is bigger than the actual airport terminal.

I’ve said before that Kristen Wiig seems to feature in movies which don’t utilise her talents very much. Directors throw her into tedious scripts and dragged-out scenarios, and I’ve always wanted to see her do something different.

In The Secret Life of Walter Mitty, Kristen plays Cheryl – a pretty young work colleague of Walter, who he falls in love with. She is endearing and very sweet. Whilst Kristen is actually a very funny actress, she toned it down a bit, and pulled off the serious element. The way she talks to Walter with deep meaning, or looks at him with such understanding brings an emotional aspect to her reason for being there, because you kind of get the sense something is about to happen between him and her – but what? And when?..

Kristen was a wonderful addition to the cast, as well as a vital character. To be honest, I couldn’t help but feel a little sad whenever Cheryl was on screen – although she didn’t do anything overly sad, it was the whole feeling she brought to the screen. That background energy between her and the man who liked her, the potential of better things happening to the pair, and how likeable she is – its all rather endearing.

And the scene where Walter sits at a table in a bar, in Greenland – he daydreams about Cheryl walking onto the bar’s stage. She strums a guitar and coos David Bowies’s 1972 hit Space Oddity at him. This prompts Walter to leave the bar and run toward the helicopter parked outside. Cheryl continues strumming her guitar – this time, on the road outside, looking up at him as he flies away. This was one emotional little gem. (I just discovered a version of Space Oddity is available on iTunes to download – David Bowie featuring Kristen Wiig)

This is one movie I’m glad Kristen was cast in. It wouldn’t have been as emotional without her.

At the beginning of the movie, Walter gets a call on his mobile from “Todd at eHarmony” – a customer service representative of the dating website – who wishes to enquire why Walter’s profile has been left blank. Walter explains this is because he has done nothing even remotely interesting or worthy of listing on a dating site.

A few days after his first call, Todd contacts Walter again. After a brief conversation, the call ends. Some time after this, the call comes again from the irritant dating site distraction – only this time round, Walter is trekking across the top of a mountain in the Himalayas. Of all the things to happen, of all the people to contact our protagonist – its “Todd again, from eHarmony”..

This part of the movie was generous dollop of funny, as most of the audience LOL’d in delight.

(keep an eye out for Cheryl’s eHarmony profile photo as Walter attempts to ‘send wink’ – is it me, or does she bear a huge resemblance to Jennifer Aniston?) 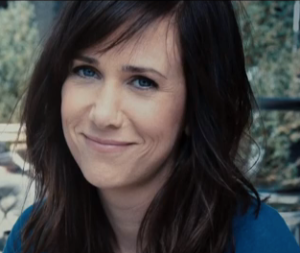 One scene sees our daydreaming DILF aboard a helicopter of a pilot – a pilot who is off on a journey which passes a ship Walter needs to embark as part of his quest. However, when the pilot announces Walter must jump into “the boat” – Walter not only gets the wrong boat, but misses it also. He plunges into the freezing Icelandic water and is subsequently attacked by a shark.

A very random scenario kicks off, whereby Walter fights the shark off with his metal briefcase and is in danger of drowning in the choppy (if slightly beautiful) raging water. But is the situation real – or a daydream which slipped in at totally the wrong moment?..

As always, I note the good and the bad of the movie. So what went wrong, or could’ve been done better?..

The scene where Walter and Sean sit atop a mountain hundreds of feet above ground level – Sean points out the children playing on the ground below: Yet the children appear to be just a few feet below the pair? Up high, yet only a few feet away? Or did I totally miss something here?..

Toward the end of the movie Walter confronts Ted – the smart-arse boss who took over Life magazine. And with all reasons for Walter to nail the bastard right then and there, it has to be the most lame confrontation I’ve seen in a movie.

The bit where Walter makes an Icelandic child give him his skateboard – that just wouldn’t happen.

Overall, The Secret Life of Walter Mitty is very sweet, and endearing. Its puzzle-solving adventures surrounded by heartwarming love make it something of an Icelandic Amélie. It is smooth and very watchable, definitely something you’d relax in front of – don’t expect an enthralling action flick, however dynamic the daydream scenes are.

The movie throws something at us we can all relate to: escapism, and fantasising about what we would say or do to a certain person – but never actually do it.

I would recommend this movie to anyone who likes a light romance, and for anyone who has ever sat at their office desk tedious – thinking to themselves, “I just want to burst out of this office and jump on the next flight to somewhere better”.

The publicity and trailers for The Secret Life of Walter Mitty ham it up to look like something huge – a concept that no other director has displayed before. Unfortunately, the hype is just hype. It won’t blow you away, but it will deliver the right amount of satisfaction you can expect from a movie of no genre. Let it run and embrace it.

This entry was posted on December 28, 2013 by rickysfilmreviews.