Jon Martello is a young, virile Italian-American who isn’t shy when it comes to (banging) the ladies. In fact, his friends name him Don Jon due to his characteristics mirroring those of legendary libertine Don Juan.

Jon thinks his life is happy-wanking. Until the night he meets Barbara Sugarman. A busty, beautiful young lady who will make a bigger splash in Jon’s life than those on his sofa cushions.. she is about to turn Jon’s life on its head – and the results may just have life-changing results…

First up – the cast ensemble. You couldn’t get better, really. Joseph Gordon-Levitt is supported by the likes of Tony Danza, Julianne Moore and Glenne Headly – which gives the entire movie a believable and colourful family display. Tony appears as an Italian-American bad boy who’d fit in superbly with Goodfellas, Julianne Moore brings a mature, wise character to the whole sex eruption, and Glenne is perfect as loving housewife Angela. And then of course, we have Scarlett; throw her into the mix and you have sex thrown amongst routine; the screen lights up brilliantly.  Brie Larson also appears as silent sister Monica – and believe me when I say silent: she literally utters 6 or 7 lines in the entire feature! 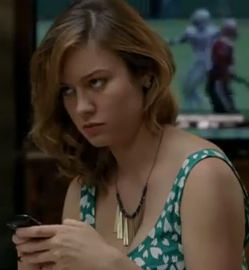 Muscle In On The Opportunity

As I sat watching Don Jon, I couldn’t help wondering why Joseph had created and directed such a piece. I wondered if he’d written and starred in his own movie about a porn addict, so that he could get his body out at every opportunity. I mean let’s face it – the boy has certainly become a strapping man; his perfectly toned abs and ripped muscles are rather hot.. I just wondered if he’d made this movie so that he could get his kit off and parade about, being as sexual as possible. Like he’s faded a bit and needs a comeback with a bit of punch. Oh, the whole thing worked – I’m not saying it didn’t. I just wondered why he had to cast himself to be the main hunk, instead of a different actor.

Jon’s mother Angela bears a striking resemblance to Kim Cattrall. I wonder if I was the only person aware of this? The irony – Kim being main star of Sex and the City; the housewife in a movie like this looking like her.. unless of course, there is no irony and Joseph had cast her specifically on her looks and thought it funny. See if you can spot it. 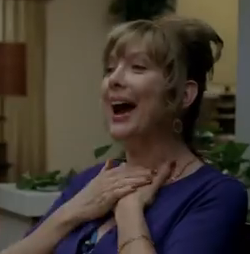 You May Turn Scarlett

I can honestly say Scarlett Johansson is superb in this movie. She delivers her character with such sassy style, its hilarious. I’ve seen her in a few things where she practically flew over my head (Avengers) and thought her straight-backed, pouty persona rather samey.  But when Barbara struts into Jon’s life, there are fireworks; she’s sexy, stylish and bold. Holding herself in a way that would make Jessica Rabbit envious, this vixen is outspoken and brutally honest (when not masticating quite vocally on a huge gob of chewing gum) 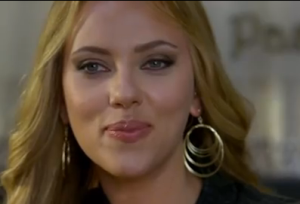 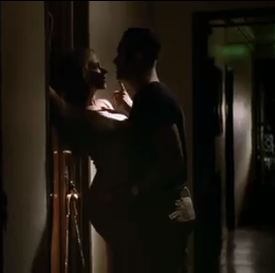 Scarlett plays Barbara prefectly; she nails the characteristics of an all-American girl and throws in the attitude to match. Some of her lines are quite funny too, spoken with an authentic New York accent – a “woit d’ya woiiint?” (what d’ya want) kind of thing. Although busty and secure, her view on life is a bit warped; one scene sees our newly loved-up couple in a shop where Jon announces he’s going to purchase a Swiffer mop for his kitchen – to which Barbara kicks up a fuss in response, and stops him from purchasing it because he shouldn’t be cleaning his own floor. A housekeeper should be doing it. She stares him into staying by her side. 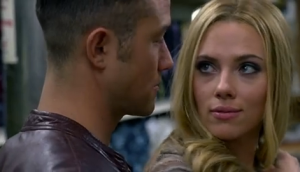 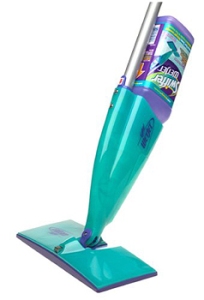 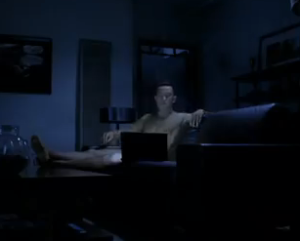 Their relationship is swiftly brought to an end.

However, it isn’t until Jon meets a woman called Esther that everything in his life changes…

Someone Got Moore Than She Bargained For

Julianne Moore. When I think of this woman I immediately think, old. Long-ish neck. Redhead. Possible grandma. Far from anything to do with sex. And suddenly, my cozy knitted-jumper wearing image of her is shattered..

Julianne was actually rather funny in this. I only know her for more serious, subtle roles, but by God – give the girl a chance at a funny part and she certainly delivers. I can only describe her comedic style as ‘natural’ – delivering lines with a slight smirk on her face, which stirred some lovely funny moments.

Have you ever walked down the street, or around the supermarket, and seen that rare young-old couple? The guy in his 20’s or 30’s dressed in modern jeans and a trendy shirt, whereas the woman in her 40’s or 50’s displays a clear age difference – being considerably older than her lover. And yet they seem as content as anyone else..

One part of Don Jon sees our main man hook up with an older woman (Moore). But despite the obvious age gap, the two characters find contentment within each other. Sometimes all it takes is an honest woman to point out a man’s fault, and this is what she does. Esther offers Jon a piece of advice; after their sexual encounter in the back of her Jeep, she tells him that when he is making love to a girl, he seems absorbed in himself whilst he’s shagging, and doesn’t take the other into account. She tells him he has to “lose himself in the woman” – not think about himself all the time.

This results in the formation of a relationship, where Jon feels happy because Esther is sexually practised and has taught him things he never learned from his younger conquests before now. Its a whole “she gets me” kind of thing.

Perhaps this is what most of us have seen in the supermarket or walking down the street; its not that the younger fit lad is bonkers and the older woman has brainwashed him. Its probably because they click, emotionally. Spiritually. Its nothing to do with the body, its the head and heart which matter.

However, if its an older man with a young woman it is very wrong, frowned upon and the man could end up being done for it. Crazy world isn’t it. 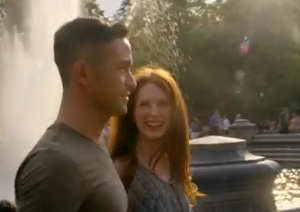 After this movie, I think my own “what the Hell is he doing with her?” opinion has changed quite dramatically.

Overall, Don Jon is very watchable. But at the same time, has a few messages to deliver. What you may think is pure filth, may just teach you a lesson.

However, steer clear of this movie if you’re not into graphic sex.

This entry was posted on November 20, 2013 by rickysfilmreviews.