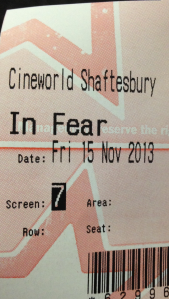 On their way to a music festival in the Irish countryside, Tom and Lucy decide to stop for a final night of comfort in a nearby hotel. The hotel is isolated – perfect for privacy. They just have to get there first..

A brief “I think we turn left here” suddenly spirals into a headache of a journey for the pair, as they become lost in a maze of narrow lanes and impossible road signs. The tension rises and panic sets in as the pair become increasingly concerned about their safety.

But then things take a more sinister turn. And Tom and Lucy are going to wish they never took that left turning in the first place…

..what in the HELL was this?

I was all geared up for a nice slice of Brit horror before I entered the auditorium. The poster made this ‘movie’ appear like some sort of Blair Witch-style frightener. I was excited.

I can categorically state that In Fear is one of the WORST movies I’ve ever had to sit through. There was literally nothing to it! It definitely matches You’re Next as one of the most tedious ‘horror’ movies I’ve witnessed, and is 9th worst movie I’ve seen this year. I honestly wouldn’t sit through this again, even if you offered me £500 shopping vouchers for M&S.

However, I like to give a fair review – so I shall try my best to point out the positives too.

Overall, Iain and Alice are very convincing as a newly formed couple and blend into the story and setting superbly.

The feature is filmed in real-time; you know – shot entirely in one go. Its this aspect of a movie I find most intriguing; the whole ‘cameras rolling, bring it on’ kind of thing. The element of shooting a movie without breaking is fascinating.  So why did I find In Fear so excruciatingly boring? I think I know..

Improvisation. I’ve been checking out the production of this movie online (note, there is absolutely zero trace of it on Wikipedia) and it seems the actors were given a scenario – and told to improvise most of their time. I honestly believe it was this element which let them down; the fact there was no script to follow. Sticking a story such as this in real time was not a great idea – because the result you get are two people. Sitting in a car. Confused expressions on their faces. For a very long time.

Being filmed in real time mean’t we were faced with a messy puddle, instead of a brilliant water feature.

Turn For The Worse

The beginning of the film sees Tom and Lucy tediously navigating their way around a maze of country lanes.  “brilliant!” I thought, “a decent slice of panicky action to settle us into the action”..

The driving went on.

I began to squirm in my seat. One arse cheek – the other arse cheek..

Halfway through the couple’s confusing ride, I found myself thinking, “that’s quite a nice shade of green, that emergency fire exit sign..” – SHIT! Concentrate.

I shifted my eyes away from the auditorium decor, and back to the screen. I’m sorry, but this movie didn’t keep me engaged in the slightest. You know something’s not right when you’re sat staring glazed-eyed at anywhere but the screen. Again, I think because it was improvised that this part seemed as endless as the lanes they drove down. How ironic.

We are aware of a scenario without even seeing it. Yes, quite possibly what could’ve been the key scene of the movie – was not shown. Only talked about. At one point early on, Tom announces how he was involved in a brawl in the pub they had a drink at earlier. He describes how a random man bumped into him spilling his drink – but how he (Tom) was the one who ended up settling the atmosphere by buying the stranger a drink in response.

That is all we had. All the preceding details to go on. Almost irrelevant to what was happening in the present, Tom pipes up with this minor bit of information a bit too late. No one gave a shit.

As the movie drags on painfully, we watch as Tom and Lucy encounter a complete stranger who goes by the name of Max; he jumps up halfway through – literally – slamming himself against the car door and its clear he has been attacked (by possibly the person / people who are also taunting our disorientated couple)  Bleeding heavily, the couple take him in with the hopes that he can offer help with getting out of the woodland. Unfortunately for them, Max has other things on his mind – and might just be the insult added to their injury… 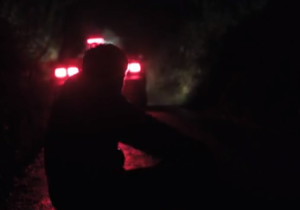 I can’t offer much detail about what happens without ruining the film really (this is how much very little happens) however, I can break it down into segments:

A strange little cabin in the middle of the woods

..and even then, nothing happens with the cabin; Lucy walks up the steps to the front door. And back down again. Cue exit of cabin.

The “they wouldn’t do that” moments flowed nice and strong. One moment which stands out is when Tom gets out of the car to investigate the noises going on outside. And Lucy?.. she sits in the passenger seat, waiting. For a few seconds, we get an outside-shot of the car as she leans against the window looking around, a look on her face which resembles a rabbit caught behind the headlights.  Yes indeed, she leaves him out there in possible danger, and herself in the car also in possible danger. Considering this was mostly improvisation, why the fuck did she not go with him!?

Most of the females I know would have had a “no! Don’t leave me in the car! I’m coming with you” attitude. Just Lucy cowering behind Tom as he delved deeper down the pitch black country lane would have sufficed. But no. She just sits and watches – for a good few minutes.

The film definitely touches on the fear all claustrophobes face. Being stuck in a car – in the dark – in the middle of a forest – even I would bloody hate that. The two characters are boxed in and trapped, and the difficulty of this situation is clearly displayed. I got a headache just watching, as they drove round and round in circles, arriving back where they started – it was insane. So if anything, the claustrophobia concept is there.

In Fear had the potential to be brilliant; its nerve-shredding concept could have been intriguing as well as terrifying, whilst keeping the audience wondering about what could possibly happen next. Instead, what we got was a director (clearly just out of film school) who thought, “yeah man. A British horror that takes place in the countryside – totally improvised. No one’s every done this. It’s gonna break boundaries”.

The end result was ultimately a sloppy piss-take. An amateur director dabbling in the art of real-time cinema whose “let ’em get on with it” attitude shone through clearly and instead of being unique, slowly broke apart – before collapsing in a complete shambles.

I smiled during the ‘car maze’ scene, as the woodland they were lost in reminded me exactly of a place where I grew up. Down near Gatwick, there is a village named Handcross. Its green, gorgeous and rural – and a bloody nightmare if you get lost. The labyrinth of long, winding lanes and lush green fields which seem to stretch into infinity are beautiful by day. Terrifying by night. 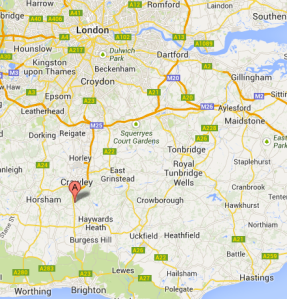 Without spoiling the ending, I will say that it is complete wank. It really is. At this point, the director clearly just gave up and thought, “fuck it guys. I’ve run out of ideas. I’ll leave you both to create your own conclusion – go for it”

As the final shot takes place, one of the characters braces behind the car wheel – eyes on the situation before them. OK, so I felt moderately on-edge here. But then I just gave up.  The scene comes to an end, and the screen suddenly goes black.

Believe me when I tell you, In Fear is by far one of the biggest pieces of shit I have ever had to endure. Apologies for my language, but its the only way to express my reaction to being completely let down. The poster makes the movie look like some sort of terrifying ordeal; turns out the picture of the pair of eyes is a snap-shot from a less scary scene where Lucy is looking out of the car window.

I have tried to get some background info. on this movie online – there is hardly anything, and no search results at all on Wikipedia. Says it all.

Director Jeremy Lovering may have had an optimistic approach to his film; captured in real-time, with just three actors improvising their way through. But he couldn’t have fallen any further. The whole thing was a classic example of a festival-going, hippy film school graduate who thought “hey! I’ve struck gold with this idea” – but didn’t.

He struck bronze. And stayed there.

If you’re thinking of paying to see this movie – please – DON’T.

I honestly don’t think its even worth renting. In rental terms; its the kind of film you rake out of LoveFilm by mistake – yet rent it just to fill your list.. but when it actually arrives and you play it – its switched off within the first few minutes.

In fact, I haven’t got a good word to say about this film, therefore I shall try and offer something to make it seem intriguing. (basically a picture of the cinema ticket defaced appropriately)

This entry was posted on November 16, 2013 by rickysfilmreviews.