My opinion of this movie, Steve Coogan, and Judi Dench changed dramatically after I’d left the cinema.

In the 1950’s, a young woman named Philomena Lee met a handsome chap with whom she grew rather close. He swept Philomena off her feet, and one night became even closer.. she fell pregnant. But a mother’s love was quickly seen as wicked. She was immediately sent to live in a convent. Nine months later, Philomena gave birth (under the scornful eyes of reluctant nuns) to a beautiful little boy who she named Anthony.

What should have been the happiest time in a woman’s life, spiralled into a living nightmare – because once Anthony was pulled from her body, Philomena was thrown into a separate living quarters of the convent, where she slaved seven days a week in the laundry room. She was able to see her baby – for 1 hour a day.

Until the day her best friend came running into choir practise, a distraught expression on her face. And told Philomena that an American couple had just arrived at the convent – and taken Anthony. He had been given away by the nuns, adopted once he reached age three.

As the swish American car leaves the grounds, Philomena is slammed against the barred garden gate, screaming. Banging her fists on the gate with tears streaming down her face, she lets out a final blood-curdling scream before collapsing in a heap on the ground.

This film is based on a true story.

What a delightful pairing, seriously. When I saw the poster for the movie, I must admit I wondered if it’d be worth going to see. Dench as always with her classic ‘grand stature’ characteristics and little-old-lady-turned-great-actress style. And Coogan – although has proved his worth in previous releases, I wasn’t sure..

She played an old Irish lady (complete with accent) superbly. Judi brought us Philomena; classic Irish humour and straight talking to boot. She doesn’t pull any punches this girl, and her outspoken nature is hilarious. Mainly because she’s so honest; speaks her mind.

He gave us natural emotion. Steve’s portrayal of journalist Martin Sixsmith was spot-on. A mature, slightly pessimistic man who appears the mirror opposite of the woman he tries to help – for example, Philomena believes she did good by giving her baby up for adoption because giving birth to him was a sin; which Martin simply thinks is a “load of shit, there is no God”.

Its not a usual partnership, the likes of Judi & Steve, but this is what made their screen time precious. Two actors from opposite ends of the spectrum (she’s more serious than him, he’s more comedic than her) brought together to give us a story. Whether it was their casting or acting, the two played out Philomena and Martin – two people you normally wouldn’t see together – with such natural flair.

One evening as Philomena sits in her armchair watching the television, her daughter enters the room to find her clutching a tiny black & white framed photograph of a little boy. This is the moment a 50-year-old secret is unveiled, and a journey begins. Because later that evening, Philomena’s daughter is at work – and as she stands pouring wine at a private function, she overhears a gentleman talking about his journalism career. She approaches him to ask if he’d take on a story / investigation about a woman she knows, who once had a child taken away from her. And then a story begins..

Martin and Philomena embark on a road trip – from London to Ireland, in search of her son Anthony. The trip is paid for by Martin’s boss – a feisty editor who doesn’t care about the feelings of Philomena, she simply wants a good story out of it. However, as the journey continues, Martin’s ambitious personality and agnostic view on life are brought down before him, as one woman’s personal experience becomes less tabloid and more personal to him than he ever thought possible.

This movie is not just a quest to find someone, but a personal journey for one person’s closure and another person’s eye-opener.

Tears Of Joy – And Sadness

The movie blends comedy with sadness in a way that reflects real-life experiences. One minute us audience were laughing out loud at things Philomena was saying and a split-second later, one of the women in the audience was omitting a squelching sound (crying with a snotty nose, basically) – the only way I can describe the atmosphere created by this film is by likening it to the classic ‘upset distraction’ – for example:

You’re at the funeral of a close friend / relative. As you exit the chapel, a friend approaches you – puts their arm around you and softly tells a joke that the deceased person would have roared with laughter at. Looking at the floor through tears, you manage to let out a small chuckle as you wipe the tears away.

This is what Philomena does. It accurately displays genuine human emotion / reaction. While our main character is in a state of upset and loss, her situation is lightened by a man who – although sympathises – brings a realistic approach to her grief. But as the film progresses, we see Philomena warm to Martin and her own sense of humour begins to shine through. 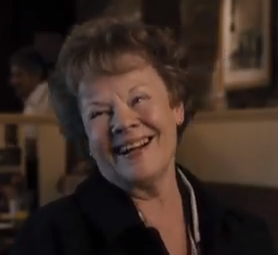 Nuns Nearly On The Run

The character of the stern nun who oversaw the departure of baby Anthony is very important; not only was she the strict old wench who governed the convent back in the 1950’s, but she makes a reappearance during Philomena’s journey. We are faced with a suspense-builder whereby we wonder how she’ll react to the old woman – will there be a very un-religious face-off?

Something confusing happens first: Martin & Philomena arrive at the convent – where this whole story started – and a place she has had contact with occasionally over the years. Will there be record of her baby boy?..

..all records were destroyed in a fire. There is no information left of Anthony. His very existence became ash.

The pair stop off at a pub on their way home, to drown their sorrows. As Martin gets talking to the landlord, it becomes apparent that it is local knowledge that the convent in question sold babies to rich American parents, based in the US. And that the nuns may have bent the truth slightly about the records being destroyed in a fire…

Martin gets on the case immediately, by using his US contacts to trace Anthony – and after a spell of dedicated Admin work, takes Philomena over to the USA to try and get closer to the answer they both crave. Just a day or two into their stay, a discovery is made..

Some of the things Philomena comes out with are bloody hilarious.

“..yes, I’ll have a Bucks Fizz (PAUSE) ..you have to pay for everything on Ryanair”

“the Gays don’t use condoms. It lessens the feeling, you see”

“things is.. I didn’t even know I had a clitoris, Martin”  (LENGTHY PAUSE)

The way in which she says these things is done so with such brutal honesty, that it proves very funny.

At the end of the movie, the pair return to the convent in Ireland, and Philomena faces the governing nun (who is now wheelchair-bound) – she tells her that she forgives her for what she did when she sent Anthony away. Whereas Martin has a different view; his professional gloves come off, and he threatens to “tip you out of that fucking wheelchair”

But does Philomena find Anthony? What has he become? Is he alive? Is he dead? What is his legacy? And how will the journey for her and Martin end?..

None of the above questions will be answered by me. Not only do I want to ruin a lovely little film, but its important the viewer embraces the outcome as well as the build-up.

Philomena exposes an incredible true story, and its two lead actors bring it to us with a raw and faultless performance. It is honest and emotional, at the same time as being compelling – and its beautiful settings only add to its brilliance.

Definitely worth a watch. (but maybe take a few tissues)

This entry was posted on November 3, 2013 by rickysfilmreviews.