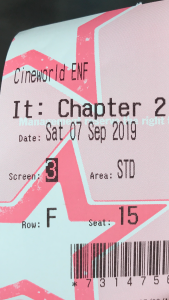 Twenty-seven years after their first encounter with the terrifying Pennywise, the Losers Club have grown up and moved away, until a devastating phone call brings them back.

I honestly do not see the appeal of these It re-makes. For one thing, they seem to play on the comedy factor which is utterly bizarre. Pennywise (Skarsgard) may have creepy makeup and a menacing tone to how he speaks, but for some reason a literal sense of humour shines through it. The drain scene, flying through the air whilst holding on to a cluster of balloons, and even a fairytale-like monstrous woman figure bounding through an apartment with her boobs swinging.. none of it is built from the substance you would expect in a movie of this genre. Even Pennywise’s voice is kids TV show material.

I wanted frights – and what did I get? A giant Pennywise head attached to a spider’s body as it scuttled through a cave, resembling something you’d see in a fucking Toy Story movie or similar. If the producer’s assume what they created here was of the horror category then I can’t imagine what they’ll knock up next. It: Chapter Two is practically a mocking of Stephen King’s work, fronted by a few very popular names who I’m sure had many viewers in question as to why they wanted to be part of it. McAvoy is a striking example; the actor has proven his talent in movies such as Split (2017), Glass (2019) and the X-Men films. So why he felt like running around a fairground’s neon fun house is beyond me. His performance is strong, but It just hasn’t been worthy of his talent.

Far from the 1990 original, these two It movies have been lacking the terror they needed for this generation. A clown popping out of the dark with a bright white lightbulb-shaped head, giggling manically and flashing goofy smiles like some sort of Mickey Mouse hybrid is just not scary. At all. And fear is exactly what the book and original film were based on, no? Having a homosexual couple to open the movie wasn’t a bad move, but it did seem a bit random. Did the book or original movie have gay guys in it? No? Then the director clearly wanted to add a dash of equal rights just for the fun of fitting in with modern times. 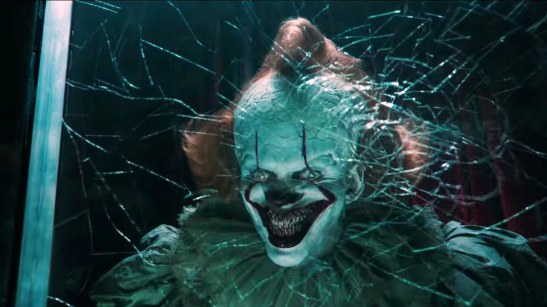 I refuse to write any more about this waste of screen space.

This entry was posted on November 30, 2019 by rickysfilmreviews.