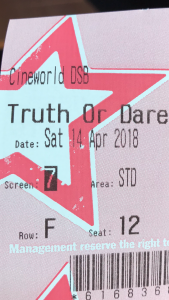 A harmless game of Truth or Dare among friends turns deadly when someone – or something – begins to punish those who tell a lie or refuse the dare.

Truth or Dare contains one of the most incredibly bizarre concepts for a movie I have ever seen. A spirit inhabiting a game – and the players having to continue playing until it is passed it on or ended. Weird. But for what it is it works. For all its hormonal, tacky, pretentious bullshit – Truth or Dare is watchable should you find yourself with nothing to do one evening. Watchable bullshit. Who’d have thought.

There is a hint of the Final Destination movies about this one (although those movies are far from the standard of this). It contains that darkly sinister chain of events as a group of young’uns try and outrun their grisly fate. The scene which reminded me most of the death-dodging series was where Penelope is dared to walk along the edge of the roof of a house. The tension in the scene rises as two other characters remain below, holding a mattress for the girl to land on should she slip. Until a very sharp tip of the garden fence slices through the material, nicely positioned for her to be penetrated by. A wickedly enjoyable air of tensity here as the question – with her every step – remained: will she fall?..

The tension is good during certain scenes, but the best element of Truth or Dare has to be the faces. Normal everyday people whose features become strangely twisted when propositioning the next player of the game. This movie is tedious in parts but fortunately these scenes are saved instantly by the ‘smilers’. Whoever’s turn it is next is approached by someone – friend or total stranger – whose face suddenly becomes distorted as the question comes, “truth or dare?”. I didn’t know whether to howl with laughter or be scared. These people looked fucking bizarre, tight lips pressed together and corners of the mouth pulled directly upwards as though on a string. And still smiling. Hilarious.

I did exit the cinema feeling like Truth or Dare was one of the worst movies I have ever seen. Had it not been for the Joker-on-crack style smiley faces and deliciously twisted plot I probably would have walked halfway through. In all honesty, this tacky movie is beyond taste. Laced with a handful of unrelateable characters I just couldn’t care less about, its filming style is comparable to tripe such as Cabin Fever and Paradise Lost. Actors you’ve never seen before strutting around a set in knee-high boots delivering a story so far-fetched you’d be forgiven for mistaking it for an episode of a dark teenage soap series or something similar. And although the acting from all involved isn’t disastrously bad, they still don’t seem to be fully into it. The performances are average  at best as each scene plays out, meaning I as the viewer couldn’t care less about what happened to either person on screen. That’s right – I didn’t care. Which isn’t great because a film needs likeable characters to make it that bit more engaging. Shame. 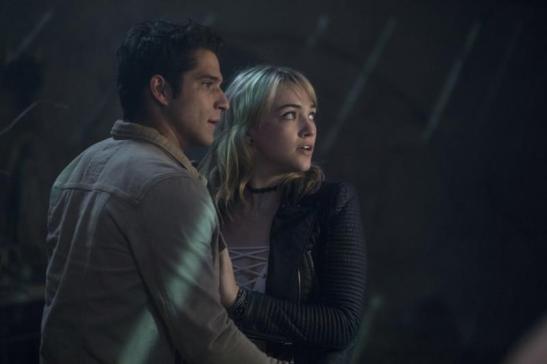 There is always that oblivious attitude in a cheap horror flick isn’t there. The moment one of the characters doesn’t believe what is happening to a friend – even though it just happened to them. One example is when Olivia accuses a male character of doing something nasty that he did not. He replies, “no I didn’t” – and leaves it at that. I DETEST this; when a character denies something – but knows for a fact each and every other one of his friends are experiencing the same thing, I.E. they are all being approached by a ‘smiler’. And yet he won’t state the obvious.

Another thing that takes the stupidity award is the fact that every one of Olivia’s group of friends know how dangerous the game is. That people can die. And yet they let their attitudes and egos take over, meaning one stomps away in a childish rage. Another argues with the group leader and runs off somewhere (probably a late-night cafe, they always end up in late-night cafes don’t they). Another two bugger off somewhere else..

..for the love of fuck, how about sticking together for a couple of days people? You know, considering your lives are on the line. It’s these types of characters and sorts of situations that downgrade movies like this and ultimately present the viewer with personalities they’ll probably end up resenting just half hour into the story. I’d like to see a movie where the people have to stick together, regardless of their differences in order to survive.

Truth or Dare is just awful. Beyond tacky and delivered by actors you’ve probably never seen before, it just about makes it as a horror film. Its moments of terror are tame at best and nowhere near as scary as they should be for this sort of thing. You want the truth?..

..steer well clear of this movie. It does for the horror genre what David Walliams does for the heterosexual community: it’s confused. It poses as a horror movie but isn’t fully there and plays out in a way that needs some serious editing to shove it in the right direction.
Verdict: terrible. Faces: brilliant.

This entry was posted on August 26, 2018 by rickysfilmreviews.