When Greg Sestero an aspiring film actor, meets the weird and mysterious Tommy Wiseau in an acting class, they form a unique friendship and travel to Hollywood to make their dreams come true. 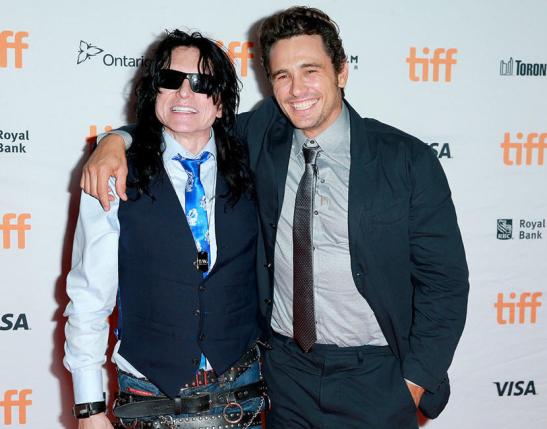 Good god. What a weird movie. There really isn’t much to The Disaster Artist at all; it does everything a biographical piece of cinema should but massively lacks something at the same time. Something crucial..

Watching this movie in the cinema stirred a mix of reactions. At one point I found what I was seeing hilarious. And at another I was bored. Familiar with the phrase, “love it or leave it”? – pretty much sums up The Disaster Artist.

The most tedious parts were Wiseau gathering together the ‘stars’ of his film and then eventually filming it. During these particular scenes Franco stumbles around the (both) set, slurring his lines and yelling random shit at his co-stars. And whilst probably remaining true to the spirit of Tommy himself with a convincing performance, this doesn’t do much to fuel the movie’s appeal. It is basically James Franco having fun but – ironically -allowing the rest of the feature to crumble around him. The action is minimal, the dialogue is bland, and this movie is missing a huge amount of farce. Had director James Franco actually thrown in this element every now and again, The Disaster Artist would’ve been a brilliantly witty watch. There are some movies out there that portray the failure of certain things in a shimmering light; watchable actors delivering painfully funny comedic moments as they tell the story of a doomed project, such as a work presentation or a theatre production. Uneasy breaks in dialogue, ridiculously funny performances, perfectly-timed pauses. And if portrayed well enough, allowing the scope for viewer reaction between humorous moments, such movies can strike gold in the comedy category.

The Disaster Artist doesn’t really do any of this. It’s simply ‘Franco having fun’ whilst bringing to light a famous film for millions of viewers. He plays Wiseau well and is supported by a solid cast, but otherwise there isn’t much structure to the scenes as they roll. Not a lot of effort put in to the comic-biopic balance, and in the end this movie becomes more of a talent showcase with the leading actor getting up and doing impressions of clearly one of his best-loved film producers. It wins at publicity though; it couldn’t do more to acknowledge the existence of The Room – an independent film made back in 2003 that was so bad it was brilliant. And it’s painfully obvious to see this Hollywood flop is close to Franco’s heart – the man just had to produce it. We get it James – The Room happened. But The Disaster Artist shouldn’t have.

Since seeing The Disaster Artist I have done some research and found various clips of Tommy Wiseau online. And I have to say, awful movie or not, Franco does a supreme job at portraying the filmmaker. His voice work is absolutely superb, pulling off Wiseau’s disjointed accent as if the man was speaking backstage and Franco was lip synching. Talented work has gone into his characterisation too, he seems to focus purely on the man himself. Excellent work here.

This entry was posted on April 1, 2018 by rickysfilmreviews.