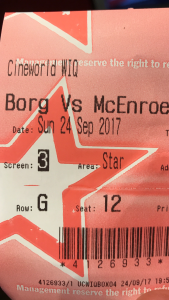 The story of the 1980s tennis rivalry between the placid Björn Borg and the volatile John McEnroe.

It was a Sunday evening when I watched this movie. I had just returned to London after spending the week in Manchester and whilst dragging my heavy suitcase with aching arms through London Waterloo in need of relief, I spotted a huge poster advertising a strange looking movie: Borg vs McEnroe. Shia LeBeouf sporting a wonderfully shabby 80’s hair-do, completely expressionless look on his face. 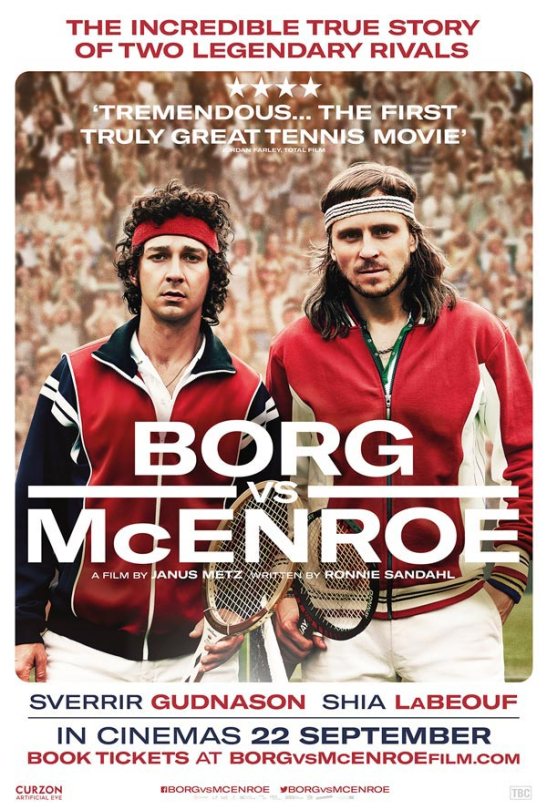 Cineworld. West India Quay, London. One of my favourites.

Borg vs McEnroe isn’t a bad little flick at all. For a biopic based on real events between two famous tennis players, it certainly delivers the goods. Its winning element has to be how it balances tense and comic moments throughout. I’m not talking side-splittingly hilarious, but just enough humour (mainly fuelled by LeBeouf) to lighten some moments when the two men on screen together. This pair are certainly a mixed double:

LeBeouf stomps around the set bringing the tennis legend to life superbly. His stroppy outbursts make very entertaining watching; at one point the man throws himself to the ground of the tennis arena and lays moaning like a child. And another scene sees him mouthing off to the game’s umpire which becomes extremely aggressive very quickly. The actor is faultless in his portrayal of the shot-making pro, using a lot of physical gestures like swinging his racquet violently  and jumping up and down during his (famous) tantrums. His transformation into the stringy-haired sporting legend is great and very different to characters I’ve seen him play before, which is good. 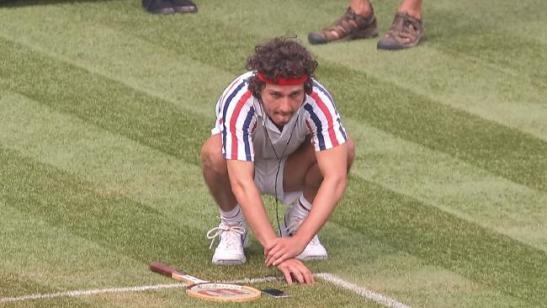 It’s all very effective stuff and shakes up the movie’s dynamics nicely given the conduct of his rival..

Gudnason portrays Björn Borg as effectively as LeBeouf portrays McEnroe. The pair are on a par with each other, however, Gudnason’s air of sheer cool raises the tensity in a totally different way. Head high, a studying glare and the epitome of ‘only speak when spoken to’ his maturity is on a totally different level to his opponent. The man’s character is deadly serious and takes the spotlight with more dramatic scenes. The movie is shaken up nicely here as it goes from stroppy man to wise man, the dynamics changed within seconds.
One such scene examines the way in which Borg deals with the pressure of sport and how he prepares himself for a match; viewers get a blend of voiceover / action here as McEnroe discusses Borg with his friends and the picture flicks from his setting to Borg’s hotel room. This bit involves Borg walking barefoot across tennis rackets in his hotel room to fish out the one with the strongest strings. It’s subtle but intense and the energy picks up nicely here as the movie progresses. It’s different – double the action with storytelling. 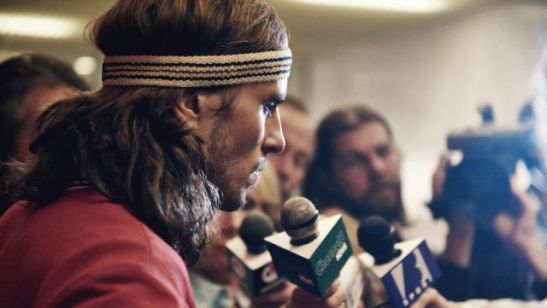 This is like one of those movies you’d catch on an airplane flight.
Both actors fulfil their job of delivering a watchable movie here. Borg vs McEnroe may not be an award-winner, but it’s certainly effective. Fans of tennis won’t be disappointed and those who aren’t as up on the sport won’t need to be – the plot makes up for this by bringing a true story to life in such light that the action is balanced nicely with the topic of activity it is centered around. This movie is an easy watch, delivering the goods without wandering off into in-depth character development or relationship analysis. You want sport – you’ve got it. You want rivalry – you’ve definitely got it. And if you want Shia LeBeouf in a role vastly different to previous ones, complete with authentic sweatband-topped 80’s tennis outfit – you’ve got it again.

Rivalry at its best right here.

This entry was posted on December 14, 2017 by rickysfilmreviews.