When her boyfriend dumps her before their exotic vacation, a young woman persuades her ultra-cautious mother to travel with her to paradise, with unexpected results.

I had high hopes for this one. Really did. I expected stomach-hurting scenes of laughter, I mean just look at that pairing:
Amy Schumer. Goldie Hawn.
One is old and funny, one is young and funny. One has been on the movie circuit for at least thirty years. One is fresh and original. Genius.

Something was drastically missing from Snatched. This movie provided more of a 95-minute stand-up comedy gig than something worthy of the big screen. Its story is very simple; daughter dumped by boyfriend (with whom she has a holiday booked) offers her mother his place and takes her away to Ecuador. Simple. But the story was nowhere near as hilarious as (I imagine) the prodcuers wanted it to be. However – if you’ve got Schumer and Hawn, you don’t need the story to supply any entertainment do you. The names alone make the movie worth seeing, no?
Leave the rest to go to shit?

No.
Not in my world. If a movie is going to be effective it needs focus on all aspects, including the story. I think this is the main area in which Snatched failed. The plot is very simple and gets into the action almost immediately but it dries up within the first hour. Viewers are treated to Hawn’s first appearance as concerned mother Linda, but this scene doesn’t even get the chance to become funny before it quickly turns stale. Hawn sits on a sofa feeding lines to Schumer who in return drops a few gags, but ends up being no funnier than someone mouthing off in your local pub on a Friday night (and that’s before they started drinking).

Oh I chuckled heartily – because it was Amy Schumer – in that classic way:

Enthusiastically devouring every second because the lead actress has been hilarious in previous movies, so surely she’s comedy gold in this?
(denial basically).

Letting out a very loud laugh – before pausing and realising the script was terrible and questioning why I found what I was watching funny.

Laughing very enthusiastically in a way that (in the back of my mind) would hopefully spur on better comedy than what was happening currently on screen.

Wishing it was funnier, basically.

This isn’t the first movie to have evoked this reaction from me. Many comedies have ended up disappointing (the Dumb and Dumber sequel with Jim Carrey and Jeff Daniels was just shocking). But it’s not great, finding myself wishing the movie funnier when really I should admit defeat, get up, exit the cinema and jump on the 152 bus home.
But I stayed.
And hoped it would get better.. 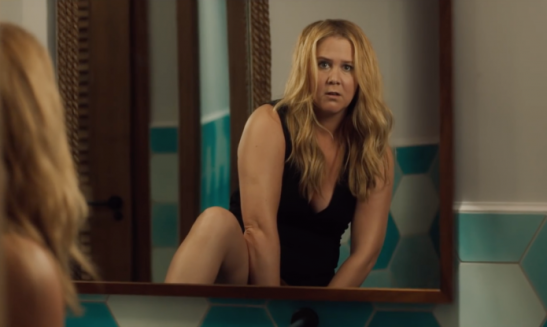 The scene which follows Emily and Linda’s capture was probably the most memorable.

When Emily comes to in a sealed room she immediately panics and starts running around – and then stops. Asks her mother what she is reading.
Hawn holding up a glossy magazine and revealing its explicit pages of a man and woman going at it was – literally – fucking hilarious. And Linda’s smutty remarks on the literature she has found on the floor was icing on the cake. In actual fact, it seemed as though the older woman was outdoing the younger woman on the comedy scale by miles.
Was this all about Hawn and her comeback?..

So far, Snatched was funny – but not winning me over completely. Hawn was delivering the goods, but something was missing here. The movie’s structure was frail, it wasn’t moving quick enough. Each scene seemed to chuck itself into the next with humour, but at the same time all the consistency of mud. This movie needed to perk up a bit.

You know those movies where very funny things happen in the trailer, but these things aren’t actually in the movie? Same happens here with Snatched.
The clip in the trailer for example where Linda leaps from a balcony, and Emily announces, “mom that was AWESOME!” in delight.

..doesn’t happen in the movie.

The clip in the trailer where the two women approach a bar and the man serving drinks drops an insulting comment about them both – to which Emily responds, “you would be lucky to fuck us”.

..doesn’t happen in the movie.

The clip in the trailer where the pair are in their prison cell, being interrogated by bullying henchmen and Emily is forced to give the pin number for her credit card.

..happens differently in the movie.

That’s right folks, Snatched is one of ‘those’. One of those productions which reels the viewer in by the trailer and then fails to cough up the funnies during the actual show. I was disappointed with it, I expected better.
And the scene where Emily has a tapeworm extracted by a jungle doctor is ridiculously disgusting; the man coaxes the worm up and out of her throat by dangling a piece of raw meat in front of her open mouth.
Cue Schumer running around the wooden shack with a stringy object hanging out of her mouth like a scene from a dire horror flick.
What on god’s earth was I watching?

Amy Schumer fans will no doubt lap this one up on account of the fact the woman is naturally funny – regardless of how good or how shit the movie she’s in is.
I find her funny too. But looking at Snatched as a whole, it is awful. An explosion of comedy ideas thrown at the wall instead of being properly sewn together. Even the closing scene is predictable and doesn’t wrap the movie up well enough, leaving room for a possible sequel – but I honestly hope there isn’t one.
The two leading ladies are the ideal pairing looks-wise, I must say. They make a very convincing mother and daughter. And I’m sure Schumer had a wail of a time scoring Hawn to star alongside but it seemed as though the enjoyment was on the inside between the cast and crew – screw the viewer.

Wonderful to see Hawn again. Awful to see her in such a dire production.
Don’t you just hate that? When a brilliant actor / actress who hasn’t been on screen for a long time is brought back to star in a movie – which is a total flop?
Fuck sake.

This entry was posted on July 9, 2017 by rickysfilmreviews.