A woman sets out to make life hell for her ex-husband’s new wife. 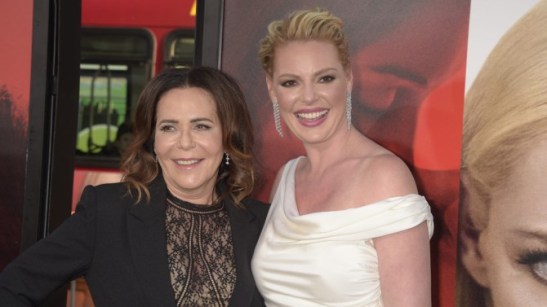 If it’s a gripping thriller to keep you in the edge of your seat you’re after – don’t look to Unforgettable. This movie contains a mad bitch and creepy moments but ultimately remains a simple story about a bitter woman trying to come between her ex-husband and his new girlfriend. And although Heigl makes the perfect bitch, there really is no difference between this movie and an episode of say, Desperate Housewives (remember Edie trying to get between Susan and Mike?). The striking difference of course being the violent temprament of the lead character, but then even Desperate Housewives contained violence.

Unforgettable is one of those films that misses the mark, never quite becoming the winner it set out to be (a-hem, The Boy Next Door) due to its restricting plot. Let’s face it: A and B split, B meets C. A dislikes this and tries to split B and C up. There’s only so much A can physically do in order to achieve her goal, and this is what makes it restricting. Alas, the movie plods along with Heigel taking full control of the picture; her perfectly rounded bad bitch being the only reason worth watching it for. She does it with faultless gusto too, Tessa is far from any other character I’ve seen her play previously. Her icy disposition makes for an engaging watch; piercing eyes and a mad stare to match. Rigid body posture. An air of constant threat. She’s everything you’d expect from an emotionally unstable ex-love. 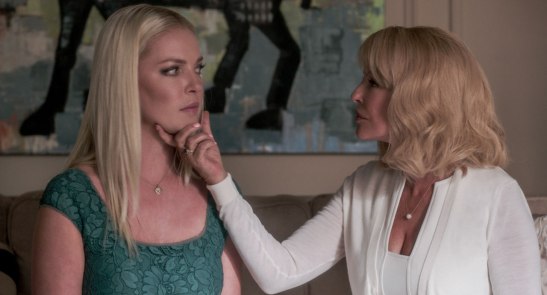 Adding to her characteristics are tight, pale features and platinum hair so straight and glossy you’d think she popped off set between breaks in filming to run to the studio nextdoor for a shampoo advert. The woman certainly looks the part. It’s just a shame she didn’t bring this character to a different film. 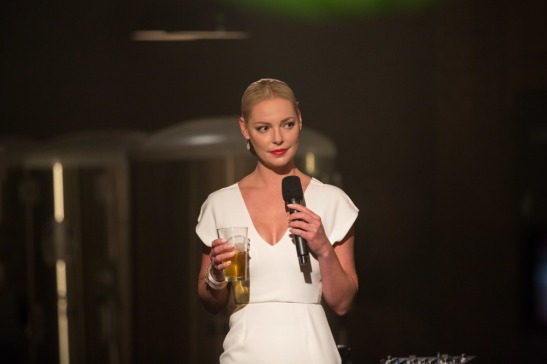 So Heigl takes the reins and proves her versatility by being a total bitch, and her display is faultless. She upstages Dawson by miles, who actually comes across dull as arse with her ‘victimised’ facade; big sad eyes and only seems to have one friend to call upon and hang out with for emotional support. Yes, Julia is one of those characters who is so annoying that it’s almost satisfying to see her get shat on by the enemy. She is also part of the reason Unforgettable is highly forgettable.

The finale of this movie is so uneventful that you’d probably remember it instantly for being so shit.

Firstly, it contains the obvious structure: where a confrontation takes place between the enemy and the victim’s partner. Cue the woman lashing out at him and delivering such a flimsy, light-handed hit that he ends up completely covered in bruises. Yes – odd. Especially as she actually struck him on the back of the neck. The bit where Tessa attacks David and he falls to the floor sees him roll over and face her – with a face full of purple bruises. With an eye-rolling reaction I hoped they’d hurry the end up, I had – well – nothing to get home for actually.
And then the ending came, but with barely any lead-up.

Where this movie fails miserably is its ability to reveal the end before its even had time to build up. For example, when Tessa grabs a poker from her fireplace and stands threateningly before David. I knew what was coming, but the director did nothing in terms of building the tension here. Instead, the movie jumps the gun and gives viewers a very predictable ending – without allowing time for its story to take shape. It’s an uneventful ending too; a bit obvious but a bit unexpected. And then the movie comes to a close, with that classic moment:

Mom, dad and child in the kitchen chuckling over something mundane such as the behaviour of the family pet or the fact the father’s schedule does not allow much time to drive the kid to a concert, etc.
Mom stands – clutching cup of coffee – smiling at dad’s shit joke, as he leans over kitchen counter looking cocky. Child suddenly thinks it has the world’s best parents now the horror is over and everyone are back to normal.

Yes, that classic moment. It seems to take place in most movies of this type. Tedious stuff.

Unforgettable sorely lacks a key element: scorned ex-wife violence. This movie had real potential, to throw in three or four shit-yourself jumpy moments. And with Heigl portraying such a twisted character there was every opportunity to add a moment of bludgeoning, or unwelcome presence at a door or window, etc. Alas, the element of shock and surprise was firmly left out of the loop and the movie drops masses of points for me here.
Remember that movie Misery? Or Single White Female? Those are the sorts of thrillers to take a tip from; the lead character popping up at a window instantly, or delivering a nasty blow to a body part unexpectedly. That’s what Unforgettable needed.
But it got forgotten. Shame. 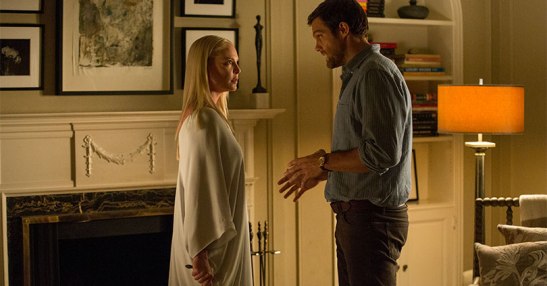 The only thing worth watching this movie for is Katherine Heigl. The woman singlehandedly runs the show with a fierce display of anger. She is 100% bitch and excellent with it too. And had the director put all his effort into it, her character could have delivered some nasty surprises. Sadly, the most you get is Tessa sitting at her desk, on Facebook, messaging the ex-boyfriend of her ex-husband’s new love interest and stirring shit between everyone.
It’s the generation we’ve become really, isn’t it: gone are the days of those movies that gave viewers a fright with physical violence. These days the movies simply see the enemy staring at a screen – on screen. Good god, I thought taking a trip on the London Underground was bad enough, with all those people on their gadgets. Now characters in film are glued to their screens.

Worth paying to view?
Absolutely not.
To be fair, Unforgettable isn’t even worth acknowledging. No wonder I saw a trailer for it just once.
Let this one pass quietly.

This entry was posted on June 3, 2017 by rickysfilmreviews.