Ghost in the Shell

In the near future, Major is the first of her kind: A human saved from a terrible crash, who is cyber-enhanced to be a perfect soldier devoted to stopping the world’s most dangerous criminals. 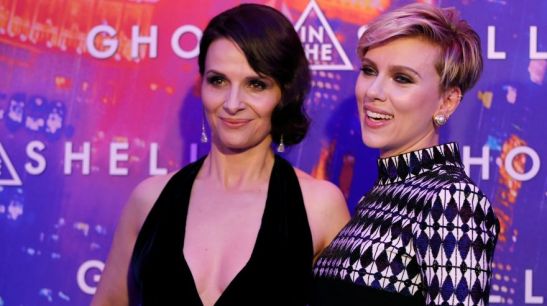 Apparently various groups of people worldwide with too much free time on their hands have decided to boycott Ghost in the Shell, due to the lead role not being performed by a Japanese actress.
I say..

Fuck ’em.
It’s a movie. Not the deciding vote of a new General Election.
The story, the graphics, direction, setting, etc. are all the same regardless of who is playing Motoko. And in this case it happens to be our neck-throbbing A-Lister Scarlett Johansson.
The woman does a good enough job, putting her naturally steely look to good use whilst jumping and shooting her way to the end credits. Agility is a main feature in this movie with Motoko sliding, pouncing, smashing through windows.. just to get places. It’s almost acrobatic how she carries herself, similar to some sort of computer game character. Fans of interactive video games won’t be disappointed. And the action is pretty much constant too which is good and makes Ghost in the Shell quite punchy, adrenaline flowing throughout. 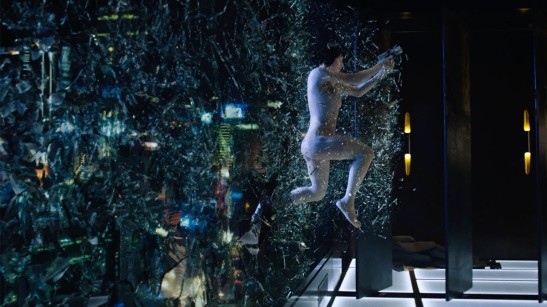 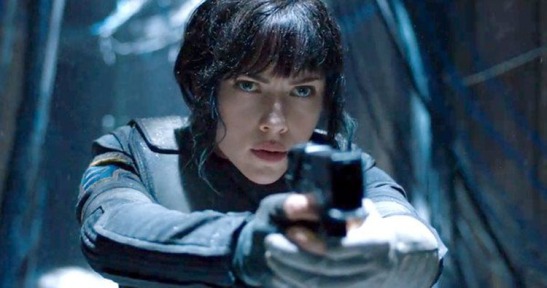 And then come the glands.
Her glands.
That neck thing she does.
Anyone else out there noticed Johansson do that thing with her neck where she pulls a concentrated facial expression, and the veins in her neck pulsate? Yeah, well it’s used in this movie also. 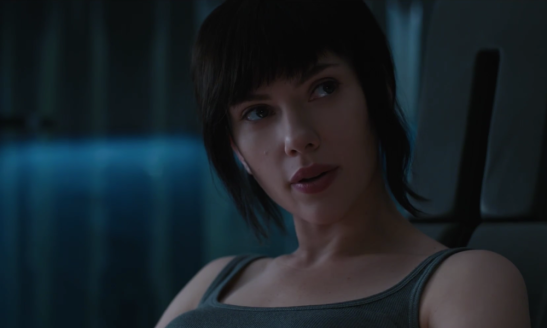 The visuals during this movie are just stunning. Deep, glossy colours and very slick animation ensure viewers aren’t left in the dark, literally, even scenes set at night look as though it’s daytime. But then that’s Japan for you I suppose; so psychadelic it’s almost nauseating.
Set in a futuristic – um – future, the city of Imperial Americana is bursting with holographic images of various present-day elements such as people and animals. Some of these are proper random too; for example, a scene where Motoko floats in the middle of the city’s surrounding sea sees a gigantic animation of a running woman behind her between the skyscrapers. Fine, artistic, but I honestly couldn’t fathom why this future generation would beam the image of a woman running amongst buildings. It wasn’t even advertising anything, it was just the woman – running. Weird.

And then the fish. Illusions of huge koi scattered across the city, suspended in mid-air. Pretty to see fish wriggling their way around mailboxes and lampposts, but for the love of fuck – what were they supposed to represent? Were they supposed to install a sense of calm in residents?
Directors make a meal of it these days don’t they. Give one a script and he or she will chuck any old shit on screen so as to represent the far future. The rest of the projections were quite good though, such as giant robot faces and people giving directions. It was bizarre, but then the moving holograms created an interesting atmosphere.

With stunning visuals and a simple plot, this movie would make the perfect watch if you have an evening free. The story is easy to follow and played faultlessly by Johansson in all her neck gland glory. There is more than enough action to keep viewers entertained too: explosive confrontations breaking out in gunfire, Motoko diving from skyscrapers and smashing through windows, scenes take place under water as well as in mid-air, and those strange looking robotic servants who suddenly snap and turn murderous like some sort of Doctor Who enemy. And the spidery creatures they evolve into are just plain sinister..

Although you may check your lap at some stage to find out if it’s actually a console game you’re playing, it’s all entertaining stuff and fortunately Ghost in the Shell doesn’t stray from its concept either. No wandering scenes that trail off into boring, talky shit like some other movies are guilty of. It’s watchable. It does its job.
And as for those bored people out there who have taken to social media to slate this movie, they can bore off. What are we doing here – watching a movie, or stating a fucking legal case against the producers for grounds of racism, feminism, sexism, etc.?
I watch a movie for the movie I’m afraid.

This entry was posted on May 16, 2017 by rickysfilmreviews.