When his uptight CEO sister threatens to shut down his branch, the branch manager throws an epic Christmas party in order to land a big client and save the day, but the party gets way out of hand.. 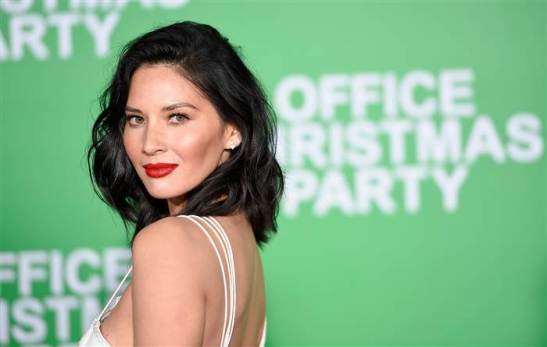 So – Office Christmas Party. A movie I first saw the trailer for and instantly thought, “this looks like good festive fun, this might be hilarious”…

Hate it when that happens. I really wanted a hysterically funny movie riddled with dry humour and one-liner’s. And although Office Christmas Party was quite funny in places, it failed overall to combine comedy with characters – and a plot – I cared about. The plot is simple though; colleagues throw a massive party to impress a potential partner of their organisation, and end up getting their Santa kidnapped, the potential buyer accidentally fucked up on cocaine, and a race against the clock for a group of employees to rescue their colleague from a trio of weird kidnappers. 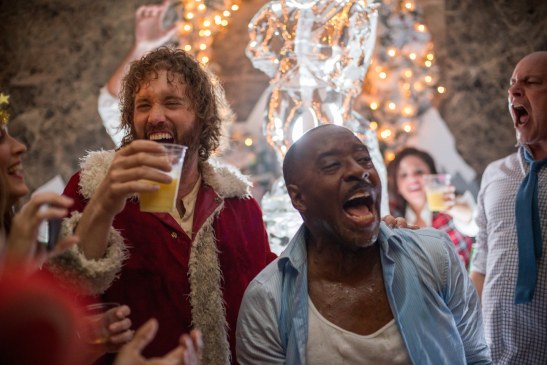 Action-wise, Office Christmas Party progresses at a good pace with the title event taking place very soon after the movie opens and the main characters are introduced. There’s no hanging about either as it throws the viewer swiftly into the Christmas carnage. I enjoyed this, as well as the air of professional-turned-unprofessional excitement it whipped up; the idea of finishing work at the office but returning a few hours later to tear the place up was brilliant. The naughty atmosphere was bubbling nicely (especially with the very large office building’s security guard lifting up her party dress to reveal illegal tasers). Gross, but funny.
All of these elements ensured a festively frisky build-up, and I have to say it worked well. Main characters were gradually brought in, the DJ pumped up the tunes, Mary (McKinnon) took over the microphone to offer the entire building Christmas greetings – and sexual intercourse guidance.. great stuff. Office Christmas Party was turning out to be very watchable.
Average – but watchable.

There was a hell of a lot of potential for this movie to go far, and break the barriers of current politics. The gags they could have come out with especially with work-based and employment issues could have been brilliantly funny. Unfortunately, the producers restricted this with just the one subject – being Human Resources and how the HR manager herself deals with the events unfolding around her.
I was a little excited by the trailer; the feeling of a Christmas party gone tits-up, suited office employees tearing off the ties and turning into animals, even Bell calling out, “hey Santa! Wanna party?” – it all got me geared up for a mad watch.

..and yet I found Office Christmas Party incredibly average. Even though its theme based around getting fucked up during Christmas festivities seemed fun, the movie itself was drastically missing something. It was classic case ‘director chucks a load of shit at the screen and hopes it sticks’.

The movie seemed almost improvised as Bateman and Anniston lead the way – something I was concerned about before heading to the cinema – this movie utilising 60% of the talent of the Horrible Bosses movies. Those movies aren’t exactly Hollywood gold; I mean they fill an hour or so with immature laddish bullshit humour, but apart from that – not overly fantastic. Fortunately for this movie however, the likes of Munn, Bayer, Bell, Park and Miller are all on the same level talent-wise and together manage to override that tacky sort of humour Horrible Bosses provided. They are a great mix of cast. Win.

Kate McKinnon. Absolute bloody diamond for spritzing this movie with a touch of ‘frisky HR manager who hasn’t been laid in ages’.
As Mary, the woman delivers more than just a blonde ball of bossiness in a god-awful Christmas jumper; she singlehandedly carries most scenes with some brilliant dry comedy. Wide eyes and a sardonic attitude, McKinnon is very funny and is practically the North Star for the rest of the ensemble to follow. The best part of her character is just how easy she is – to become easy.

When one of the main office employees is kidnapped by a hooker and her wayward pimp, a bunh of others venture out to rescue the victim.
They end up in a dodgy biker bar.
Everyone but Mary barrell into the back of the bar to square up to the mafia guards, the pimp, and her hooker.
Mary is nowhere to be seen.
Until the others shortly return, and she is seen slumped around a big old furry chap with her top half hanging open.

Absolutely fucking hilarious.
Take it where you can get it, a woman after my own heart! But on an entertainment scale this was a perfect injection of racy humour much needed.
Certain movies of this genre have to have a middle-aged, repressed female or it’s just not funny. And McKinnon absolutely nails it with her portrayal of the rigid, heel-nipping HR manager. Especially when she drops the ‘sex’ bomb as the office Christmas party opens by grabbing the DJ’s microphone and bellowing at everyone that if any of them are going to have intercourse at some stage during the party, don’t do it on company property – do it in the parking lot across the road instead.
Brilliant.

I must say, I expected more from Bayer. She was one of the reasons I was looking forward to Office Christmas Party; the woman is – or can be – hilarious. But as Allison she takes a firm back seat and appears more of a stand-in than a lead character. Dippy office clerk she may be but the comedy certainly dips with her. Bayer does offer a funny face, but otherwise Munn, Bell and McKinnon take over with nicely funny facial expressions and one-liner’s. 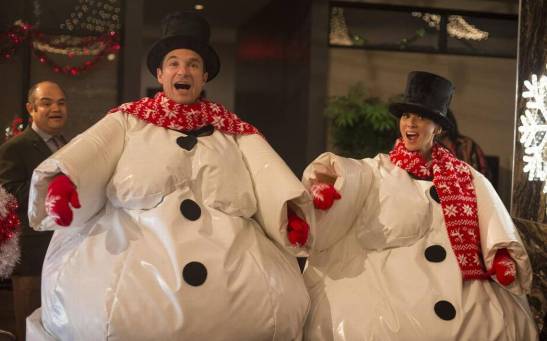 I’m half and half on this one. It was entertaining – but could have been better.
Office Christmas Party was nowhere near as hilarious as I wanted it to be. I wanted more drunken older employees letting their guards down, more mature executives doing things they shouldn’t – a real messy time of serious characters performing forbidden activities. Instead, the movie is a pile of utter trash shattering the plot’s stability and ultimately making Josh Gordon’s cinematic feat a load of shit I wouldn’t even pay to watch.
And if you do pay to watch this movie, you’re a bloody fool. End of.

Only McKinnon is worth watching it for.

This entry was posted on January 7, 2017 by rickysfilmreviews.