When her little brother, Martin, experiences the same events that once tested her sanity, Rebecca works to unlock the truth behind the terror, which brings her face to face with an entity that has an attachment to their mother, Sophie.

Lights Out. Jesus, what a brilliantly creepy, nerve-shredding movie. I’ll be brief – I fucking LOVED it. It’s a refreshing idea, takes a normal everyday action and blows it up to produce one of the most sinister stories I’ve ever seen in the movies.
The concept of a monster that can only approach you in the dark but vanishes the second you create light in your immediate vacinity is bloody genius. And as the movie plays out, viewers get served a nice amount of jumpy moments, which are more short bursts of fright. Some of the scenes involving Diana (the monster-ghost-woman-thing) are deliciously terrifying.

Although refreshing, this movie did remind me slightly of that Doctor Who episode where an invisible enemy – the Vashda Nerada – consumes its victims if they step in shadows. To avoid death they have to stay in the light. This rang a familiar bell. 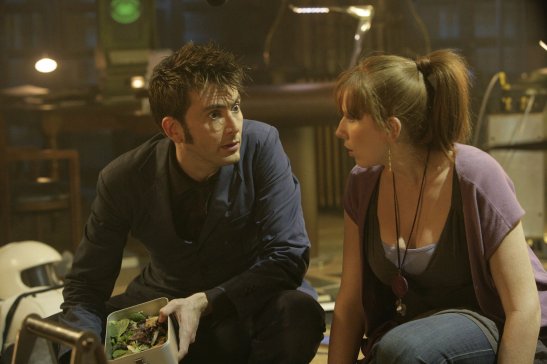 David Tennant (The Doctor) and Catherine Tate (Donna) in Doctor Who

There’s just one thing – Lights Out is surprisingly short. It’s based on a short story which is ironic (or maybe the producers wanted to be true to the genre). Either way, I was slightly miffed when it ended. I wanted more.
On the plus side of this it delivers the story and the scares in a bite-size serving, rather than filling the screen up with lengthy scenes like other movies do. It certainly whet my horror appetite. Oh, and the ending! Jesus, I certainly wasn’t expecting that to happen.. it is abrupt, harsh, gruesome and shocking all at once. Points scored here for originality.

Horror is my second favourite genre and I love being scared and made to jump during a movie. I went along to Lights Out thinking I was in for a soft, tacky horror but I’m pleased to say I almost shit myself (sort of).

In all seriousness this movie got me lurching in my seat at least three times, with its long…silence…leading…up to…BANG!! moments. The level of tension whenever Diana is around is heightened by the premise that her victims only see her when they’re in the dark. And she’s vicious too, attacking anyone she can find. Hats off to Alicia Vela-Bailey who plays Diana; the woman throws some really strange body shapes as she scratches at floors, squats, crouches and flings herself at people.
Some of this movie is so fantastically ridiculous it made me laugh a little. Nervous laughter perhaps? 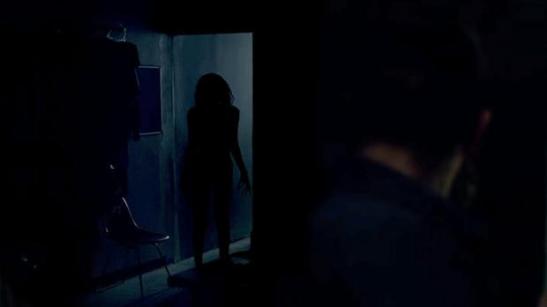 The twisted backing story for Diana and exactly why she is only active in darkness is feasible too. In fact it’s so uncomplicated that it’s explained in less than two minutes, before the movie continues with viewers aware of her harrowing situation.

Teresa Palmer who plays Rebecca is just superb in this movie. Having some very animated facial expressions, she has to be one of the best performers in the movies I’ve seen in a while. A prime example is the scene where Rebecca is in bed and woken up by a scratching sound outside her room.
When she discovers Diana on the floor, she very slowly makes her way to the door. And her face is incredibly twisted; mouth open, eyes wide, almost grotesque. This was extremely effective and heightened the atmosphere. Facial expressions from Palmer are a winning element during Lights Out, she’s on top form. 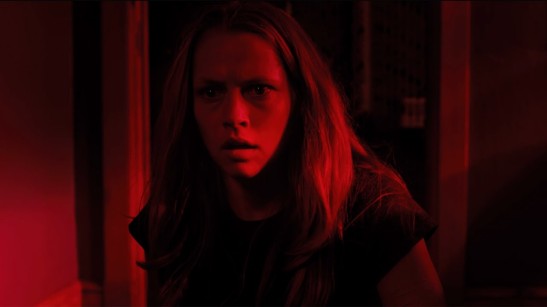 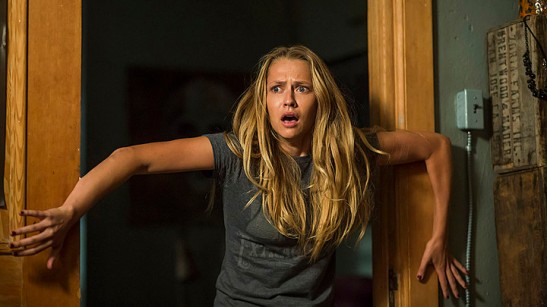 The movie focuses on the one family haunted by Diana, but there aren’t enough outsiders getting in on the action. Not enough people unrelated to the main family being picked off in pitch black. This means 90% of the action happens in the family home, with the kids running around scared, rather than friends or relatives intervening and getting whacked by Diana. There is a very gruesome death during the opening scene, but other than that this movie concentrates on the ‘bump in the night’ aspect.

I’m unsure if it’s a good or bad thing, but main characters seemed to believe Diana existed immediately – without questioning or doubting it. Unlike most other horror movies where people think the lead character is talking shit and take time to come round, this lot seem to swallow the story instantly and jump into defense mode. Weird. 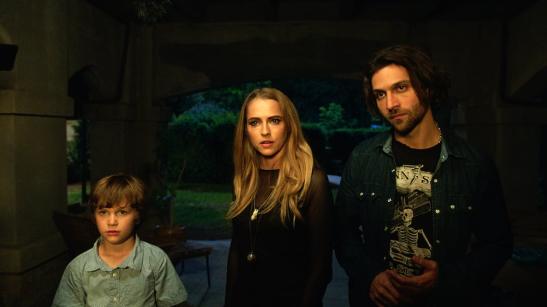 For what it is, Lights Out isn’t bad at all. In a sense, it does for people going to bed at night what Jaws did to swimmers: a simple everyday thing becomes a nightmare.
This movie is a twisted, jumpy, guilty pleasure. But if you’re expecting something huge and lengthy (that sounds more filthy than I intended), don’t – it’s a bite sized treat.
Give it a go.

This entry was posted on September 3, 2016 by rickysfilmreviews.