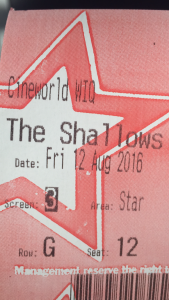 A mere 200 yards from shore, surfer Nancy is attacked by a great white shark, with her short journey to safety becoming the ultimate contest of wills.

Well, I wanted to love this movie. But something about it ensured I didn’t. My first observation is how tedious some parts are; mainly Nancy sitting on a rock for a lengthy period trying to time the spaces between tide and shark, whilst a seagull she befriends flaps around next to her. This was boring. The character sits and sleeps for a matter of days, even when the fishy beast isn’t around. This is logged by way of digital watch of which an image is super imposed on to the screen, and shows the hours passing..

..and to be honest, they couldn’t pass quick enough. I folded my my arms around 6am on day 3, and started to realise something.

There was no shark. 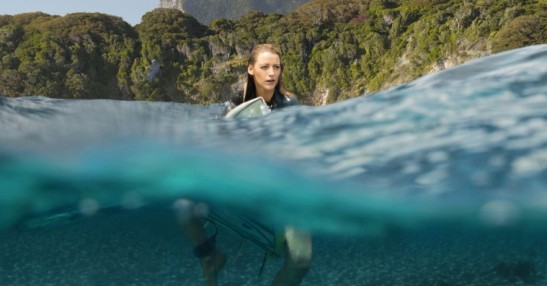 Plot-wise obviously there was, but in terms of action there was nothing even remotely gripping happening. The Shallows was becoming all about survival skills; how to ride out being stranded on a rock in the middle of the sea. Lively displays some tips and tricks which would make Bear Grylls envious, and if this is your sort of thing, you get lessons in catering (as Nancy munches her way through sea crabs), emergency medical procedure (trying to stitch a leg wound together makes for a very gruesome watch – not for the squeamish), communication skills (a washed-up camera proves highly useful and brings a whole new meaning to ‘message in a bottle’), as well as a lesson in how to be immortal (well over three days at sea with no food or drinkable water, yet all the girl gets is chapped lips and a suntan. Would anyone else not die?).

The Shallows wasn’t as tense as I expected at all. It consists of one woman, stationary, in a state of frustration. Fear does come into play, but is less focused on than her determination to escape the rock she’s stranded on. It’s okay, but it didn’t leave me reeling with anticipation. I wanted to be on the edge of my seat. And as for the shark itself..

There just wasn’t enough shark action for me. When the beast first appears it pounces at a camera with its mouth open, which creates a massive impact. I was set up for a terrifying watch. But sadly, the camera seems to focus more on the sea from above with its shadow sliding through the depths below. Then you get a bit of fin cutting through sea level, before it disappears again.

The Shallows uses suspense more than the actual enemy itself; knowing something is there but you can’t see it. Which in a way is good, but if you sit down to watch it thinking you’re in for Jaws-style entertainment.. you may want to think again. In fact, on my way out of the cinema I was walking behind two guys who I assume had just seen the same thing as me. They were talking, and one turned to his friend and said something which started, “..if that was filmed in 1991..” – and trailed off.

I think I knew what he mean’t. Maybe The Shallows wasn’t effective enough for 2016. Maybe if produced in the late eighties, early nineties it would have been epic stuff.
Lack of shark brought big disappointment to me, I wanted a healthy amount of beast jumping up out of the water but didn’t get it. Points lost here.

Keep your eyes open when Nancy discovers the jellyfish. One of the most interesting parts of the movie, it uses some fantastic graphics.
When she decides it’s finally time to make a swim for it, a school of jellyfish start appearing from beneath the sea. This scene is great, as Nancy swims deep down below the surface and tries to make her way through the mass group without getting stung. Some beautiful visuals are used here in an almost dream-like sequence; the screen pulsates with bright purples, yellows, orange, blues and greens. Brilliant. And then one of the jellyfish attaches itself to her – and stings her..

I loved this scene, it broke up the dynamics of the movie superbly and was much needed given the whole ‘Little Mermaid‘ facade Nancy seemed to be pulling off so far (I.E. sat on a rock). The visuals mixed with the breathless situation brought a wickedly tense atmosphere.

The last fifteen or so minutes of The Shallows is when the main confrontation between human and fish takes place. It’s the most ridiculously entertaining stuff; the lead character clings to a buoy as the shark tries to smash the shit out of it and fling her off.
This is definitely the most action-packed scene in the movie. It contains a high level of tension and keeps this going by mixing up the situation. For example, Nancy discovering a flare gun and trying to signal for help: will a passing ship see her in time?
And then she gets into deep trouble (had to use that one) when the shark practically destroys the buoy and she has to make a life-threatening decision: will she survive, or die?

So earlier scenes might not have been as entertaining as I had hoped, but the showdown at the end certainly made up for it. It’s worth a watch.
Or perhaps the end was so good because the rest was just a load of whale blubber..?

Well. There we are. The Shallows. Not overly exciting, but Lively carried it off well for (nearly) an entirely solo production. She was quite different in this movie to things I’ve seen her in before, which was good. Proves she’s a versatile performer. It was just the dull, lengthy scenes which let the feature down. However, as mentioned above, it does contain some good elements too – thank god. Because if it didn’t, I would have walked halfway through.

This entry was posted on August 27, 2016 by rickysfilmreviews.