After attracting both media and police attention for accidentally knocking Kate Moss into the River Thames, Edina and Patsy hide out in the south of France. 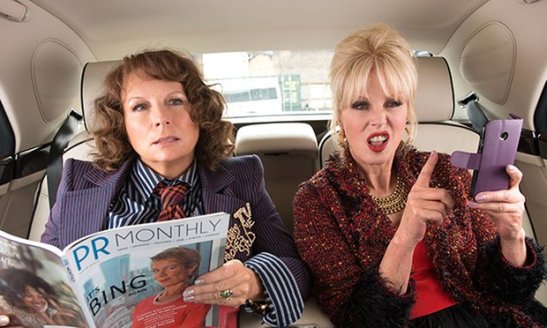 I think I was about ten years old when I first saw an episode of Absolutely Fabulous. And I became instantly hooked. ‘Pats. ‘Saff. A bunch of social middle-aged women considering a delicious lunch at Harvey Nichols the most crucial event on their schedules. Constant raucous humour, slapstick, outrageous outfits, and famous sayings which rubbed off on me (clearly) as I used to run around the school playground as that ten-year-old, shouting things like, “sweetie darling!”, which got strange looks from my teachers.
I was an odd kid.

Absolutely Fabulous returned about eleven years later with exactly the same cast, thank god. None of the women were replaced which was great, although towards the end of the final series the humour dried up massively.
And that was the end of that.

My first thought when I saw the trailer for Absolutely Fabulous: The Movie was, “why?”. I had no problem with the fact they produced this movie, but I wondered – why now, all these years later?
Questions aside, I sat back and prepared to indulge in wonderfully reminiscent comedy..

..it was alright.
If I’m completely honest, the only thing worth watching this movie for are the memories. Reminiscing over Jennifer, Joanna, Julia. et al was fantastic as I sat smiling at the ensemble on screen again. The mix of familiar characters was very enjoyable. But other than that, the plot was thin, the action tame.
In a nutshell, you’re watching two older women leave England and go to France – enjoy France (food, sunbathing, etc.) – and then return to England. The plot lacked substance and could have been a lot more than what it was. It could also have been funnier. Oh the gags flowed non-stop, but something was missing.. this was slapstick for the hell of it, and not slapstick coming naturally from a concrete story / production.

Cameos were chucked about left, right and center too (I can imagine Saunders scribbling down on a pad the screen time each celebrity personally wanted); one of these was reality tv star-suddenly-turned-presenter-presumbably-due-to-his-uber-gay-personality, Rylan Clark.
Absolutely pointless. He stands by an airplane entrance welcoming passengers as Patsy and Eddy enter, Rebel Wilson stood beside him.
I rolled my eyes.

I’ve nothing against the chap, it was just cringeworthy seeing the camp teeth whitener there. It confirmed for me that Absolutely Fabulous: The Movie was a car crash of all sorts of celebrities, from any background. Saunders seemed to spew up as many of them as possible all through the film – just because she could. Filling the screen for no real purpose. 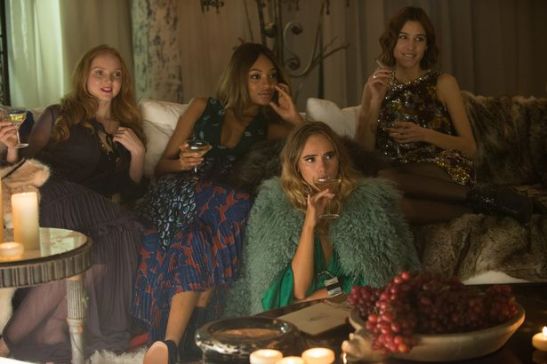 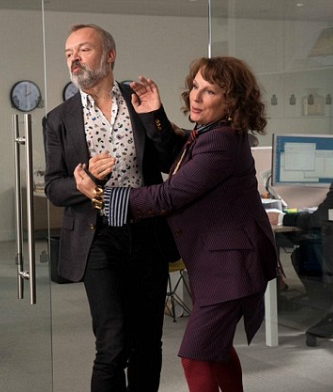 I had one burning question during this movie: Why was LuLu given her own spotlight? Whereas most other people had cameos, the story seemed to split in two directions later on. You’ll notice halfway through the singer pops up and the story suddenly follows her as she strolls through a cosy village sharing banter with her colleague. Even a scene which focuses on her face down on a table, indulging in a massage.
I was baffled as the movie trailed off into ‘LuLu’s Mini Venture’.
Don’t get me wrong – her scenes aren’t epically involving, but they’re just enough to create a distraction.

I was thrilled to see Helen Leaderer and Harriet Thorpe return as Patsy’s PR colleagues Catriona and Fleur. It has literally been years since I’ve seen either of them on screen, so their return was great. But this also added a refreshing loyalty, as it showed both actresses were keen on making a return to reprise their characters.

One or two cameos delivered funny moments, one being Stella McCartney.
When celebrity guests arrive at a fashion show, Patsy calls out to Stella something along the lines of, “is daddy here Stella? Is little Pauly here?” – to which McCartney responds, “no” tediously. The moment between the pair is deliciously sarcastic, especially with McCartney’s deadpan facial expression. The familiarity was good, got laughs from the audience. 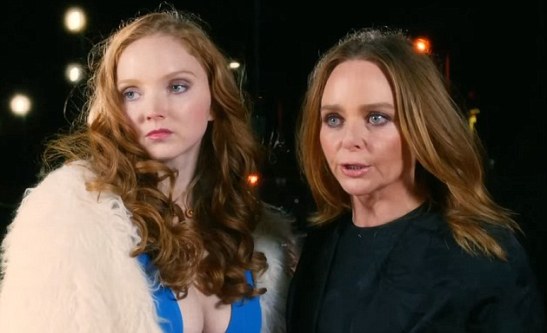 Kate Moss appears – and then goes nicely over the side of a wall into the Thames as part of the movie’s main plot. Having the model participate in the movie was a great touch, showed enthusiasm on her part. And the fact she ‘dunked’ herself in the middle of London’s River Thames (or other water containment) for real was just hilarious. I really enjoyed how her stony image was cracked and a funny chick was revealed. Good stuff.

(looks like she was carefully catered for when filming)

Marshall (Ryan) and Bo (Gaffney) also return, as well as Claudia Bing (Imrie) and Dawn French. If you’re a true fan of Absolutely Fabulous and its memorable characters, you won’t be left disappointed on this scale.

Absolutely Fabulous: The Movie could have easily been made into an hour-or-so television special. I don’t think it was worthy enough of being on the cinema screen. Its lack of substance I.E. the cast being there for the fun of it didn’t warrant a movie. To reminisce was brilliant, to sit thinking it was a bit shit was not.

I wasn’t overly entertained by Patsy’s change in to a man; there was a big camera close-up  as she entered a room.. the camera then landed on her – Lumley – with her hair simply pulled back and a small fake moustache. The build-up was a bit of a let-down.

I read an interview with Jennifer Saunders in a newspaper a while ago in which she was asked why make this movie now.. she gave a boring, uncontestable response. Something about it “being the right time”. I personally think it was too late.
Absolutely Fabulous finishing for good on television, celebrated by a feature movie about a year later – fine. Absolutely Fabulous finishing for good on television back in 2004, celebrated by a movie in 2016 – bit late, girls. We’ve all gotten over Patsy and Edina by now.

I’m half and half on this one, but then so are a few people I’ve spoken to about it. Absolutely Fabulous: The Movie makes an entertaining 89 minutes perfect for a night in when you’ve got nothing else going on. It’s not overly hideous, it’s entertaining – but missing a few sparks.
It was also missing outtakes during the closing credits, which would have been superb given the sort of cameos who were involved.

This entry was posted on July 30, 2016 by rickysfilmreviews.