A young con artist and former CIA agent embark on an anti-terrorist mission in France. 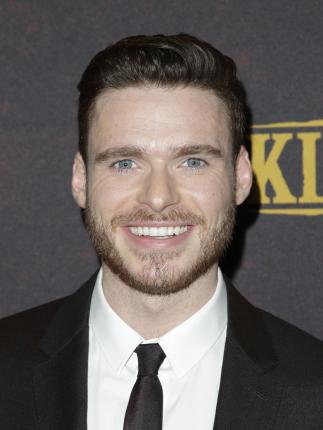 I must sat the best (and only) good thing about Bastille Day was HIM. The sexy guy from Game of Thrones. The guy whose lips you could only dream of waking up under.
That’s right, Richard Madden.
The actor certainly adds a dash of sex to this movie with his naturally rugged appearance and deliciously naive – if somewhat sleazy – tone of voice. But then I’m not complaining. The actor’s sloppy facial expressions, slight dribbling when speaking and boyish dress sense had me growling slightly under my breath. And those lips.. he looks slightly like he had a stroke, but those things are proper juicy.
Woof.

On a more serious note, director James Watkins couldn’t have cast a better person to run Michael across rooftops and strut through cities picking pockets. Madden fit the role perfectly with both image and performance quality, no complaints there. He and Elba seemed to outweigh each other in different areas though:

Madden is young, Elba is old.
Madden is fresh and sexy, oozes attitude, Elba is nowhere near as sexy, has a constantly moody face and he carries less attitude.
At one end of the scale you have pure acting talent – which is Elba. But what he lacks in looks his co-star makes up for. Yes, looks aren’t everything.. but they certainly fucking help when you’re sat watching a 92-minute movie.
And although they’re not the most dynamic duo I’ve ever seen on screen, the two men complement each other in different areas. One lacks, one makes up.

The plot is simple and light enough to follow without getting lost in character branches (who’s linked to who, who’s doing what and why, etc.) and tedious lengthy scenes. It’s good. And ut contains just the right amount of action too. Viewers get car chases and gun fights, rooftop scaling, firey explosions, even a tight-knit violent punch-up in the back of a moving van. There’s a bit of comedy thrown in for good measure, but it’s not overly hilarious. Some of the one-liner’s and wisecracks are cringeworthy, especially when coming from a top CIA agent (Elba). 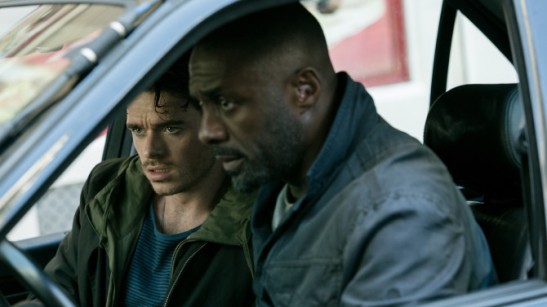 The ‘rooftop’ scene is definitely worth a watch; it certainly had my eyes fixed on the screen the entire time with its almost breathless action. I wasn’t exactly on the edge of my seat but enjoyed its pounding atmosphere.
It’s a game of cat and mouse as Sean (Elba) accesses Michael’s apartment block and proceeds to arrest him for the young chap’s unintentional act of terrorism. The scene splits between either man as both moves at full speed to reach their target (Michael’s target area being anywhere). There’s smashing through windows, swinging from ladders, sliding down the tiles and hanging dangerously from roof edges, inching terrifingly across window ledges.. and this is without the lengthy chase across the rooftops of neighbouring apartment blocks. It’s one of those scenes where the action goes on a bit too long – but so long that it actually becomes quite funny.
The men are like two animals; one in pursuit, one using every possible option to escape its clutches. Very entertaining action here. 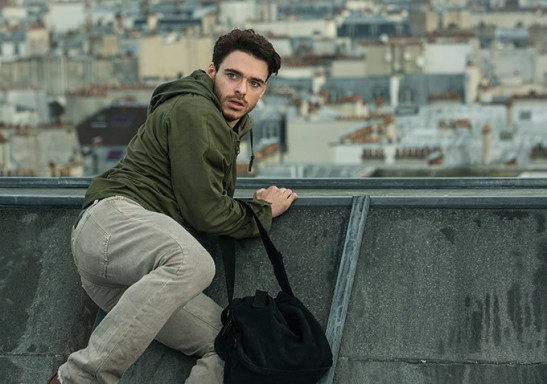 I love the way Michael stutters “I’m a p-p-p-p-pickpocket” when being interrogated by Sean. Sleazy and stuttering – by Christ, he’d get it.

Bastille Day is a tacky production. I almost questioned why Anonymous Content bothered releasing it. Although one or two scenes have entertainment factor, this movie feels like a slow burner 80% of its screen time, and nowhere near the standard of recent hits. Like shop’s own washing powder compared to branded washing powder; the difference in quality between them is huge. Same here with Bastille Day – it’s the shop’s own powder.
Weird example but you know what I mean. It’s a bit raggy round the production edges and is so simple in story that you almost don’t need to concentrate hard at all.

Also what went wrong was the publicity for the movie. I live in London myself (posters everywhere – on walls, buses, on the Underground..) and whenever I’ve seen an advertisement for Bastille Day, it features just Elba. There’s one poster with Madden, but otherwise it’s just bloody Elba everywhere as if it’s his movie. As if this highly overrated actor is some sort of acting god in his own right.
He really isn’t, I honestly don’t see what all the hype is about.

I still keep seeing buses around central London with him on the side.

Yes, I snapped this pic to prove my point.

Bastille Day is not bad, but not overly brilliant.
DO NOT PAY to see this movie, rent or stream.

This entry was posted on May 5, 2016 by rickysfilmreviews.