Pride and Prejudice and Zombies

Five sisters in 19th century England must cope with the pressures to marry while protecting themselves from a growing population of zombies. 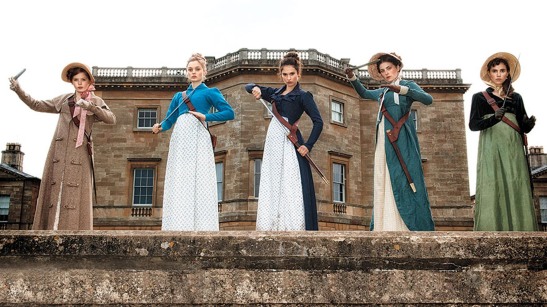 My first observation of Pride and Prejudice and Zombies is how incredibly serious it is. To the point of being as strait-laced as the actual movie / book itself. I went along to the cinema assuming this movie would be cringeworthingly bad; a sarcastic and tongue-in-cheek mockery of the Jane Austen classic. But I was surprised (and bored) when I discovered the classic story and its characters in full flow, with hardly any humour involved. What the producers do here is take Pride and Prejudice and re-stage it, using a post-apocalyptic style zombie background as its foundation. What I thought would be tacky was actually very serious; but then I still didn’t enjoy any part of the movie. It was butt-numbingly boring, and I can only assume director Burr Steers wanted to modernise the classic tale for absolutely no reason whatsoever. This genre of movie usually brings laughs from its scenes of sheer stupidity, and yet Pride and Prejudice and Zombies stirred hardly any reaction from the audience at all. Perhaps viewers in the auditorium were confused as to what they should actually laugh at, or whether this was even funny at all.

When the movie ended and I got up to leave the cinema, I heard a girl behind me say to the guy she was with, “…was shit”.
Now she could have been discussing something which had nothing to do with what she’d just watched. Perhaps she said “I want a shit”. But I honestly believe she held the same opinion as myself and got absolutely no enjoyment at all from the movie she’d just watched.

I wanted zombie action but I didn’t get it. The infected do appear a few times throughout, but otherwise this runs as a standard Austen tale about the Bennet sisters (Elizabeth, Jane, Lydia, Mary and Kitty) being set up by their mother who tries to find each daughter a suitable husband. Bring in Colonel Darcy, Mr. Wickham and Bingley and bingo – this movie is every Austen fan’s paradise. Endless garden walks and tedious lengthy chats around posh dinner tables give way to an unbearable snoozefest, with very occasionally a bleeding infected citizen being decapitated by one of the sisters. It’s boring. And if the director thought he was being clever by flipping a classic tale on its back and glitzing it up with the Bennet sisters wearing blades under their corsets, he should have reassessed the situation. Anyone could have produced a movie about zombies plaguing the Regency era, he didn’t need to fuck up the classic tale Pride and Prejudice.

In a contrasting moment during a zombie attack at a party, the Bennet sisters strut in slow motion towards the camera wielding huge swords. A moment which actually comes across as very empowering; it fits perfectly..

..into a serious drama.
Performance-wise the girls nail it, but I still wasn’t sure when to laugh – if at all. It was utterly ridiculous (in the wrong way) and not what I expected. A zombie flick which nose-dived spectacuarly and in reverse, became tedious and irrelevant.
The girls nail it, and would get top marks if they were at university. Their theatrics reminded me of being back at university; a handful of pretentious students given a copy of a famous book and asked to act out scenes as ‘modern-day’ as they could. To dress in classic Austen attire, but don weapons and perform stage combat whilst spouting lines from the pages. Yes, this is what Pride and Prejudice and Zombies was like. A group of enthused drama students putting on a show.
I was quite surprised to see Matt Smith had agreed to take part in such crap to be honest. From Doctor Who to Doctor Don’t. 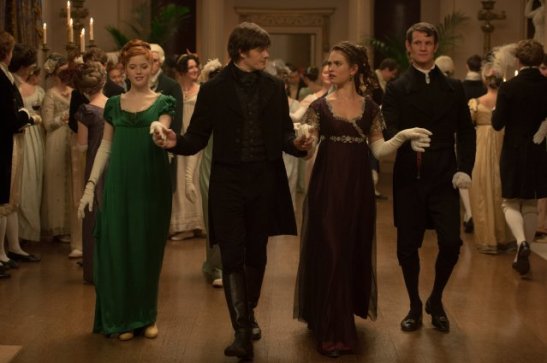 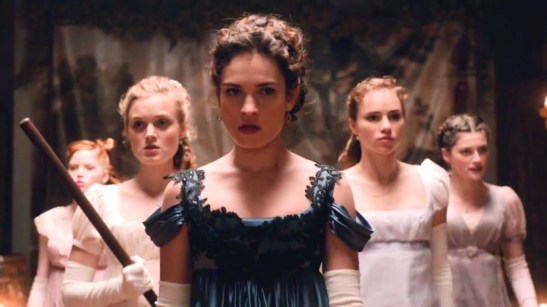 Pride and Prejudice and Zombies is utter tripe, from beginning to end. My biggest disappointment was the lack of zombies. They appear a few times, but otherwise are non-existant, becoming more of a backstory for the dull love stories on screen to unfold in front of. And by Christ they are dull. I think the last straw for me was somewhere in the middle when one of the Bennet sisters is sat on a roof, reading a love letter from one of the main male love interests. This slowly turns into a scene set in their house where even more slow, tedious action takes place between family members. I literally sat wondering what the hell I’d come to the cinema to see.

If you’re a fan of the zombie genre, avoid this movie like (ironically) the plague.
And if you’re a fan of Pride and Prejudice or other Austen works – also avoid it.
This movie is an insult to both genres and turned out to be unnecessarily irrelevant. I’d strongly suggest anyone wanting to watch this to think again. Choose something else, because by the time the end credits roll you’ll probably be muttering about how shit it is. Like that girl a few rows behind me.
Although she could have genuinely wanted a shit.
Not thought the movie was shit.
But I’m 98% sure she thought the movie was shit.

This entry was posted on February 23, 2016 by rickysfilmreviews.