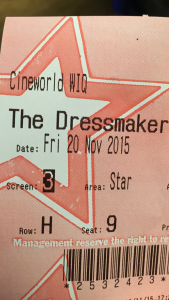 A glamorous woman returns to her small town in rural Australia. With her sewing machine and haute couture style, she transforms the women and exacts sweet revenge on those who did her wrong. 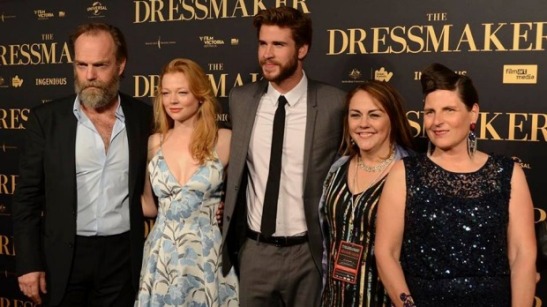 The Dressmaker has to be one of my favourite movies of 2015, with every element taken into account. The set and costume, dark humour, actors, the structure, the characters, Kate Winslet stepping out of her usual ‘independent, empowered woman’-type role and becoming something else..
The above theatrical qualities ensured a solid structure for what was one of the most enjoyable movies I’ve seen over the last few years. The Dressmaker was just weird – and I mean weird. But a good weird, almost pantomime-style weird, with a variety of caricatures gracing the set for the duration. These characters had to be my main focus, with a bunch of dynamic actors bringing quirky characters to life nicely.

Gertrude Pratt (Snook); the insecure, bespectacled geek desperate to be in love whose parents practically throw her in front of men – yet still doesn’t get their attention – who the producers / wardrobe make up to look proper rough. The young woman looks as though someone dragged her through a hedge by her hair until Myrtle gets her hands on her and gives her a stunning makeover. 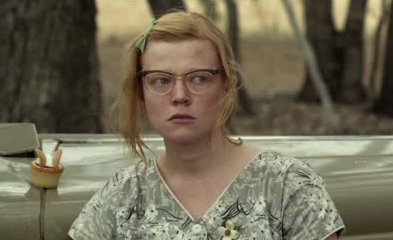 Snook brings the type of character a movie like this needs – the classic village idiot. Soppy facial expressions and slumped body gestures work wonders to give the viewer someone who keeps it moving. Like one of the Ugly Sisters in Cinderella. She changes dramatically once given a makeover too, the actress is very versatile. 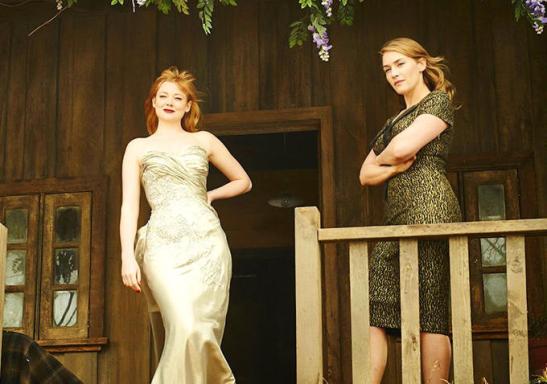 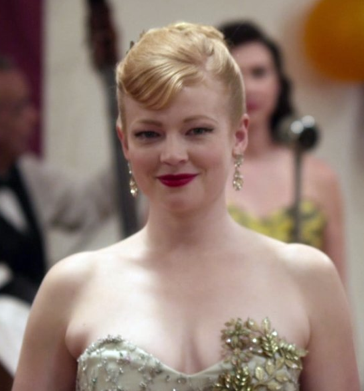 The village locals all appear rather incestuous. Each with his or her own quirk but usually wide eyed and red faced, none of them have a problem voicing their disgust at Myrtle’s return to Dungatar. They’re a strange mix of young and old, but – again – ensure great dynamics within the cast. At one end of the spectrum exquisite bachelor William, and at the complete opposite end stuttering oddball Barney, the hunchback doctor and his perky assistant, the town police sergeant who appears to have a secret dark side, vulgar mother Elsbeth (Caroline Goodall) who spends all her screen time venting disgust with an acid tongue and flapping around to the point where I wanted another character to render her unconscious. (she is played so well by the actress that I had to really study her to figure out if it was her or not). 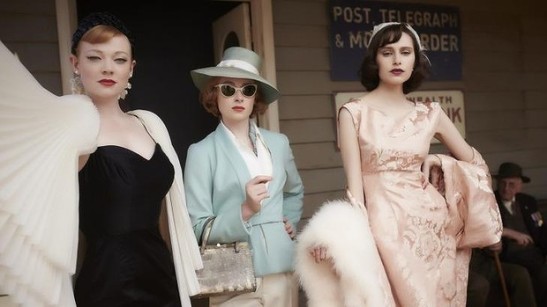 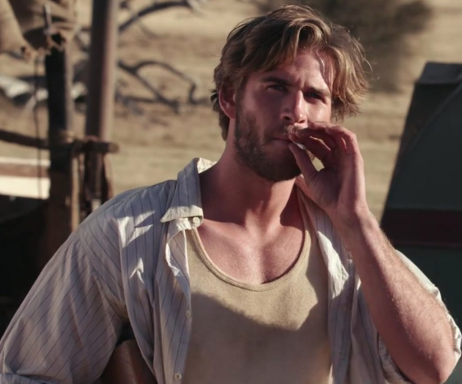 There is also the group of village wives who follow each other around and practically share the same brain. It’s two against six as Myrtle and her mother come up against the disapproving women as they all stand – hands on hips – bitching at the pair with personality traits so loathsome that they become almost grotesque.
Which is what you need in a movie.
A character cascade that is so unique and played with such energy that the movie and its ensemble are remembered long after the end credits roll.
I exited the cinema feeling thoroughly entertained. 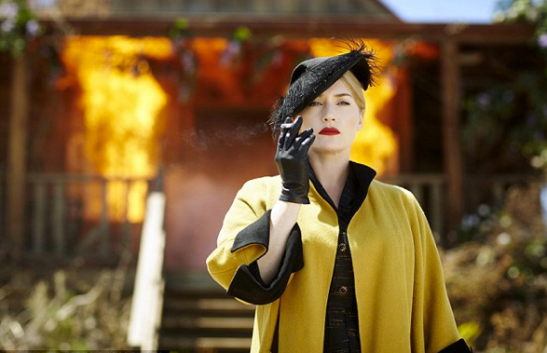 Kate Winslet totally won me over in The Dressmaker. The actress who normally plays very feminine, empowering roles is something else here. She’s Aussie for a start; her first scene being Myrtle stepping off a train and whispering, “Im back you bastards” in an Aussie accent so authentic that my eyes must have glinted with slight excitement as I wondered how she’d perform for the rest of the movie.
She didn’t disappoint.

Winslet shines as she teams up with Davis and together they steam through the movie with more gusto than an outback freight train. The two ladies become a double act with one delivering wickedly funny one-liner’s, the other providing constant facial expressions of dissaproval, it’s brilliant to watch. The age difference adds a nice quality too, it proves very entertaining during early scenes as the young woman tries to drag her filthy housebound mother out of bed – and then attempts to get her back out into civilisation. Winslet shoving a sneering frizzy-haired Davis around in a wheelchair had the audience laughing out loud, especially with the vulgar dialogue used between them.

Yes, Winslet was definitely something else and it was very refreshing to see the actress veer away from those standard frizzy-haired ‘Austen-style garden girl’ characters. Sense and Sensibility, A Little Chaos, Labor Day, The Holiday.. she always seems to land such strait-laced roles. But every now and again, she lands a gem of a movie such as Carnage or The Dressmaker itself. And the difference is blindingly obvious as she delivers Myrtle Dunnage; with any usual typecast qualities stripped away and replaced with a decent amount of talent. Her accent, facial expressions, gestures are all spot-on. And I’m glad she labded such a role. The actress nailed it. Both actresses nailed it. 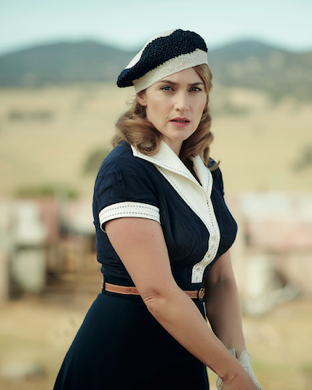 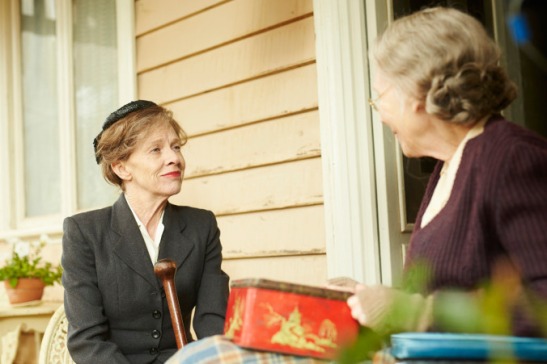 Most people have seen Titanic.
And most people remember that classic ‘hand sliding down the car window’ scene as Jack makes love to Rose.
During The Dressmaker, Myrtle has a steamy encounter with Teddy (Hemsworth) – in a caravan. The camera pans away as they ‘get jiggy’ then returns to show the outside of the caravan and a slightly steamed window.. 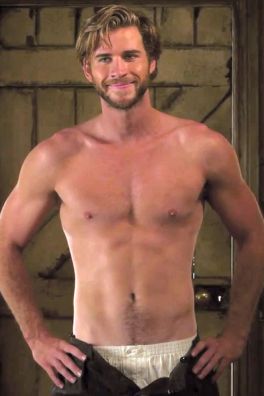 Didn’t think they would do that, but it did humour me – the thought of giving the audience a ‘Winslet Wave’ like in Titanic. Then again, given how many admirers Liam Hemsworth has, they would all probably prefer to have his penis slapping down the window, not her hand.

The Dressmaker is a great little movie. Blending revenge with comedy it makes a darkly funny and enjoyable watch. My main observation was how an air of sadness radiated from it. As well as dry comedy, the viewer sees an emotionally tormented woman carrying the burden of her mentally unstable mother and how she has to sort her out at the same time as confront her past to uncover truth.
Like any genuinely good movie, The Dressmaker contains quality elements including talented performers, a blend of comedy and drama, well-written script, smooth fluidity between scenes and memorable moments.
Dark comedy is key here as Winslett and Davis provide bizarrely hilarious moments from very serious situations. The wedding marquee scene where she screams, “it’s just a pack of lies” gripped me with sadness – mainly due to Winslett’s heartfelt performance. Very genuine stuff.

If you’re the type of viewer who enjoys wickedly dark humour, I recommend The Dressmaker. Bursting with talent and tale, it’s a perfect way to spend an evening of movie entertainment.
It’s made it into my top ten of 2015.

And the mystery runs throughout the movie of whether Myrtle did it or not. 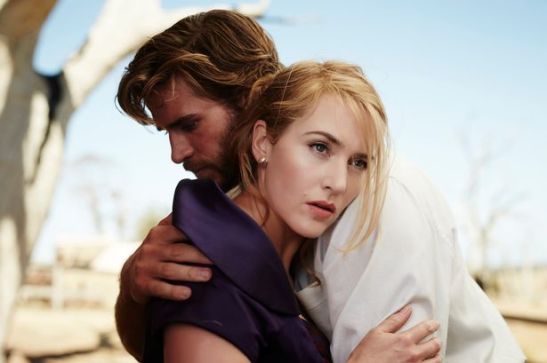 Did she commit the murder?..

This entry was posted on December 6, 2015 by rickysfilmreviews.