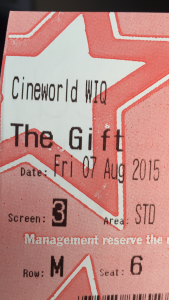 A young married couple’s lives are thrown into a harrowing tailspin when an acquaintance from the husband’s past brings mysterious gifts and a horrifying secret to light after more than 20 years. 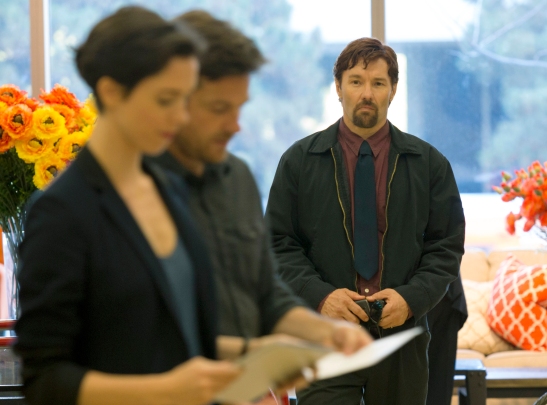 I really wasn’t sure what I was in for. But I got my ticket and proceeded up the cinema escalator with just one thought in mind:

“this could be all or nothing..”

Let’s face it, Blumhouse are on fire at the moment, churning out horror after horror after horror. Production-wise they’re fantastic, they seem to understand the type of movie current audiences crave. That said, they’ve released some shocking (shit shocking not shocked shocking) movies as well as brilliant ones. The Purge is a good example, it actually reflects Blumhouse’s creations; the first installment was boring – a family of four playing hide & seek with an intruder in their home whilst a few smiley posh kids hang around on the doorstep outside. The second was fantastic – taking the action outside, The Purge: Anarchy was fuelled by a feeling of dread as a group of normal civilians try desperately to make it to safety whilst coming across terrible obstacles on streets that are normally safe.
Enough said. The second movie should have been released before the first for maximum effect, not the other way round.

This whole ‘tipping scales’ effect is how I find Blumhouse.
They release Insidious – I am fully entertained by creepy, jumpy moments (scale tips to GOOD).
They then release The Gallows – I am bored shitless with arms folded, not very scared (scale tips to BAD).
These guys are playing a balancing act as they release their constant stream of movies, Like Melissa McCarthy in most of her features; they’re walking a fine line and either nail it brilliantly, or flop hideously.

But was The Gift entertaining overall? An original concept?
Gripping?
Nerve-shredding?..

..no.
It was (again) one of the most tame, mediocre productions I’ve had to sit through (the Blumhouse scale tipped once more).
Quite literally, what you have here is a happy suburban couple – in their house – arguing over their opinions of an old friend who has resurfaced. The difference of opinions goes on for a while, before the action kicks in – but even then the action consists of faint tapping / knocking inside and outside the house, and random presents being left on the couple’s doorstep. It just wasn’t satisfying enough. Or scary enough. I mean, who would shit themselves at the sight of a small pretty box sitting on a porch?
I didn’t.

The Gift echoes elements from various other movies throughout; the predator butchering an animal – or in this case – fish and bubbling pots atop a stove (Fatal Attraction), sinister stranger becoming more and more over-familiar with their victim’s life and then suddenly obsessed (Single White Female), a newborn child and an air of maternity which is shattered by a family friend who went a little further than ‘congratulations’ (The Hand That Rocks the Cradle).
A few borrowed elements here. 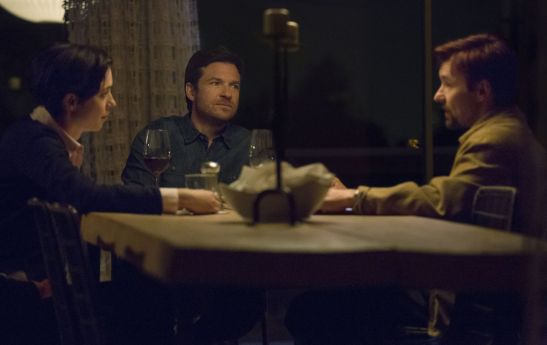 There were roughly two or three moments in the movie where I did jump. And I found myself wincing during the “is anybody there?” bits, it wasn’t ineffective the entire time. But neither did the movie win me over. It’s not your conventional horror; not a drop of blood, no violent knife-wielding confrontations, no blood-curdling screaming. The Gift is actually more psychological display of human emotion, revenge. The dialogue between characters is honest and lengthy, raw, giving viewers time to think about what is being said.
Revenge-wise, this movie is nicely nasty. It takes a pissed off acquaintance from the past and brings him back to cause havoc. Gordo (Edgerton) is a man who doesn’t forget – and never forgot..

Keep focused on the movie towards the end; Robyn falls pregnant and subsequently goes into labour, with shocking consequences. It’s actually the only bit of the movie I was gripped by.

The Gift was another Blumhouse mistake. I honestly wouldn’t be able to sit through it again; it would be like sitting through an episode of Big Brother twice – you know who’s going to enter, who’s going to exit and how the situation unfolds. There really is nothing about this movie that would make me think, “ooh. I fancy a good fright, I’ll watch that..”.
Apart from the twisted ending, I was bored. The Gift contained no striking elements and seemed to flow with a steady pace of completely nothing.
On a psychological front, it wins hands down for exploring human behaviour and how people’s minds can work. Emotions, upset, spite, it’s all here. And if you enjoy a good analytical feature, you’ll probably enjoy this.

Give it a go if you can get hold of it for free – DO NOT pay good money to see it. There are much better movies out there.

This entry was posted on August 11, 2015 by rickysfilmreviews.