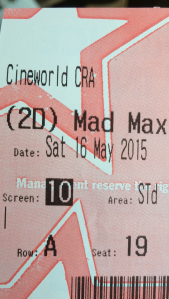 In a stark desert landscape where humanity is broken, two rebels just might be able to restore order: Max, a man of action and of few words, and Furiosa, a woman of action who is looking to make it back to her childhood homeland. 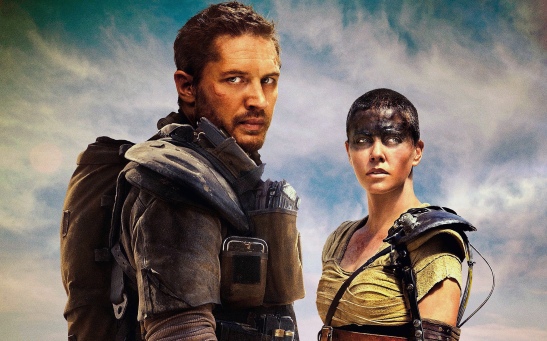 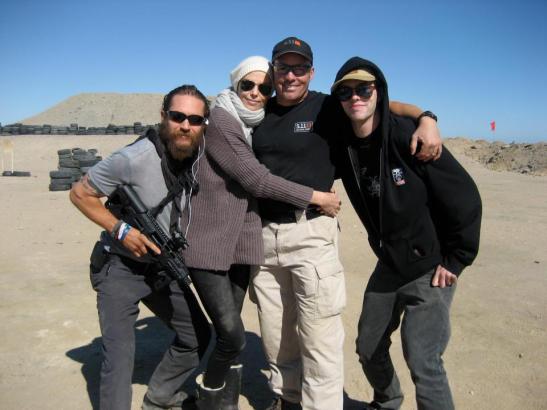 This movie is absolutely bonkers, from beginning to end. Like a blend of The Fast and the Furious and Riddick (even Tom Hardy has a gruff voice in this similar to Vin Diesel), Mad Max: Fury Road speeds towards its finale in firey flames. And it literally doesn’t pause for breath – the vehicles being driven by the main characters barrell their way through deserts and open valleys at top speed, continuously, whilst various other characters jump from one to the other in pursuit. But in pursuit of what?..

To be honest, everyone are after everyone in this fast-paced movie. Aside from scenes where the action does slow to make way for dialogue between Imperator Furiosa and Max, the entire feature is like a stampede of post-apocalyptic neanderthals covered in face paint. At one point there was every element of an action movie happening at once; explosions, screeching vehicles, impressive agile stunts, bursts of fire and gunshots.. I had a slight headache from it all. In fact, the intense speedy action had me feeling a little nauseus. This really wasn’t my kind of movie at all. It was the wrong genre for me. Couldn’t have been more different to what I normally watch.

And yet I thought it was fantastic..

Mad Max: Fury Road is very well executed, presenting its audience with impressively fast action, and ensuring its two protagonists – played by Hardy and Theron – both remain a strong screen presence. Considering the movie is literally made up of cars and trucks chasing each other across sandy plains, it manages to contain this action and move it forward without veering off in different sub-plots or stories. The director gives you one group – the other group – fast vehicles – and shouts “GO”. And it really is non-stop. As I sat watching the movie, I almost felt like I was part of the chase; drawn in by the constant action with so much to look at on screen. This is probably the movie’s winning element – the fact it allows the viewer to be pulled in, surrounding them with so much action that they can almost be part of it just sitting there. I can only imagine what Mad Max: Fury Road is like in 3D (good 3D, not the shit they promote these days which has hardly any effect).

Another case of less is more during this feature, as the pursuit between the newly acquainted pair (Max and Imperator Furiosa) and the army of Immortan Joe takes place purely on the wasteland of desert; there are no houses, clusters of buildings or normal road, not a chunk of concrete in sight – again drawing the focus directly to what’s happening on the chase. This movie is very well directed, I could feel George Miller’s enthusiasm radiating from the screen – he certainly put a lot into it. Again, Mad Max: Fury Road really isn’t the type of movie I go for. I’d normally avoid something like this, and it would need a lot of work to impress me. This impressed me – whether my ‘type’ or not. As I sat watching hunky Hardy storm across the screen, I wasn’t bored. (and I mean hunky – I’d let Hardy take control of my gear stick any day). I had my eyes firmly on the screen waiting for what would come next. Which has to be the graphics..

My favourite scene was when Max, Nux, Immortan Joe, ‘the girls’, Imperator Furiosa and anyone else thrown into the mix secure their goggles and enter one hell of a sand storm. The effects used here to create swirling storm clouds are brilliant; I felt a flicker of anticipation as I watched lightning flash in the distance, and their vehicles began to enter the stormy mists. Grit smashes them as they continue to race through the weather interruption, with Nux (Hoult) heightening the atmosphere by screaming insane one-liner’s. It’s quite hectic, but involves impressive visuals so if you’re the sort of viewer who enjoys otherworldly landscapes and weather patterns, then this is your movie. 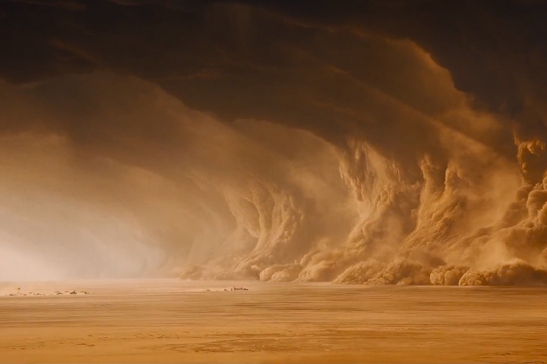 Another scene where the main characters drift into a land even more desolate than the desert is quite sinister. Strange creatures (or are they people?) wade through what appears to be thick mud, under a moonlit sky. Mad turns murky as the effects here mirror the quality of that you’d see in features such as Lord of The Rings – maybe not as glossy but still very animated. I found this whole ‘into the storm’ scene entertaining, it was a nice touch. 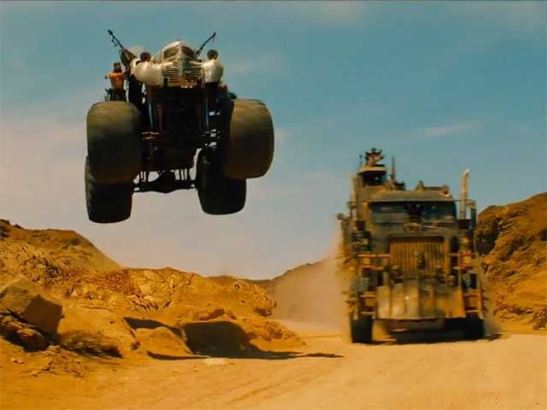 My only complaint about this movie would be its structure / substance. Although very well directed, the plot is literally just a group of people speedily driving their trucks across desert – in one direction. With other people following closely behind. As the movie opened, there wasn’t a lot of dialogue between characters – just driving. For a member of the audience who wanted entertaining, I was lost. I sat wondering exactly what the story was; having not seen any of the old Mad Max movies I was clueless. I also wondered what time this was set in – the near future obviously, but what year? Irrelevant perhaps but these factors had me lost. I mean, people – driving – continuously. Was that it?

Secondly, the ending scene which sees them returning is way too fast – I honestly couldn’t tell who was getting hurt, what was happening to who and how. It speeds along at such a rate that is boggling.

Plus, I am the type of audience member who points out those obvious elements most people just glaze over. I therefore wondered just how – albeit the story taking place in post-apocalyptic wastelands – the lead characters seemed to benefit from an everlasting supply of fuel and weaponry. The end of days, and yet they were all in possession of fully-tanked motorbikes, cars and trucks. The convenience was astounding.

Mad Max: Fury Road wasn’t a bad little flick. Colourful and well directed, it’s a constant car chase which remains loud and gritty throughout its entire screen time. If you like fast cars and aggressive facial expressions, I have no doubt you will find this movie entertaining. Its winning streak for me is how it happens continuously; there is so much to look at on screen all the time that you run the risk of missing a crucial part of the story should you turn your head away for a minute. Tom and Charlize make a dynamic and very believable pair during the feature, it couldn’t have been better cast. This movie is The Fast and the Furious on (Vin Diesel’s) steroids. In fact, it surpasses that ‘boobs & bikinis whilst sipping Martini’ bullshit by miles. These characters are car-jumping because they have to, not because they want to. These characters have purpose; not a one-way ticket to a Florida girl’s vagina for whoever hits the finishing line first.
(yes, I’m calling The Fast and the Furious shit).

Thought I’d hate it.
Didn’t mind it at all.

This entry was posted on May 27, 2015 by rickysfilmreviews.