When her father unexpectedly passes away, young Ella finds herself at the mercy of her cruel stepmother and her daughters. Never one to give up hope, Ella’s fortunes begin to change after meeting a dashing stranger.

The main person I was really looking forward to see ‘pop’ on to the screen was Helena Bonham-Carter, as Cinderella’s Fairy Godmother. Going by her history of wonderfully animated performances, I knew I’d enjoy this. A few people I’d mentioned that I was seeing Cinderella to asked about Helena also, including a woman I know at the gym. “oh, yeah.. that Helena woman is in it as Fairygodmother, isn’t she?” came her comment.
Yes, many people are aware that the talented actress is part of the cast. And I was ready for a great show.

..she was on screen for less than four minutes.
My opinion is torn half and half here because the actress gets hardy any decent screen time – but what she does get is performed brilliantly.

When Cinderella is thwarted from going to The Ball, she becomes upset and goes and wallows in the garden. Which is when she discovers a frail, wrinkled old woman who appears to be in need of food. This, of course, is Helena – portraying an old witch-like lady in a style only she can. Her performance skills shine yet again, as she grunts through wonderfully funny prosthetics (otherwise known as an old lady’s face). The actress made me laugh out loud with satisfaction; her characterisation skills were fantastic. Practically unrecogniseable, yet incredibly recogniseable as the actress. But far from short-lived, her performance continues as she ‘whooshes’ into a different character – the Fairy Godmother.

Fairy Godmother is a radiant, scatty woman who never fails to deliver a line with pure assurance. She hops around the screen (wand in hand) wide-eyed and bursting with empathy for Cinderella. Although bordering on a ‘crazy aunt’ personality, Helena manages to capture the moment with sole use of her eyes. The heavily masacara’d gems seem to bulge like that of a lost puppy, yet maintain a proper Disney warmth. What can I say – the woman is splendid. 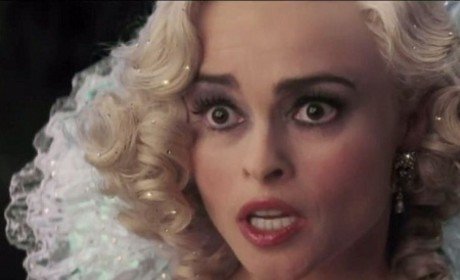 The story of Cinderella is well known for its lead characters. Two in particular: The Ugly Sisters. They are a double act who (funnily enough) are ugly, both inside and out. The thing is, in this movie, appearance-wise they were not ugly. They couldn’t be further from it. One was lovely looking with big pouty red lips, the other – plain and pokey-faced, but really not bad looking. In terms of character continuity, this movie fucks up in one or two areas. Everyone (Ugly Sisters, Fairy Godmother, wicked stepmother) seemed to be pretty, mainly due to a lot of make-up – plenty of lipstick and blusher used on everyone. 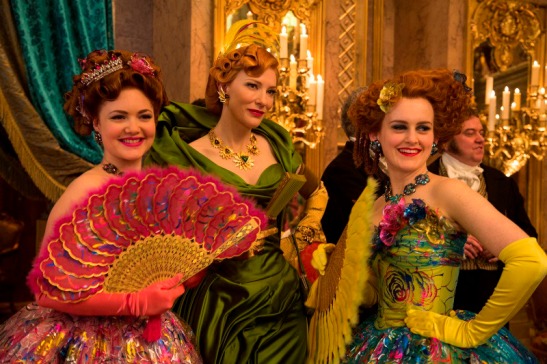 Maybe my observation is of how the producers took an unusual turn on the plot; I.E. they re-told the classic story with the use of glamourous characters. Like Hansel and Gretel (2013) which saw Jeremy Renner and Gemma Arterton dressed in leather and eyeliner, and surrounded by boobs and massive guns. Maybe this was the intention for Cinderella, but it was an obvious element and strayed slightly from the classic story.

Whilst I’m on the subject of the Ugly Sisters, I must say “hats off” to one of them – Sophie McShera (Drizella). I had no idea she was part of the cast; I did no research before seeing the movie so only really knew about the lead girl and Cate Blanchett. I first spotted Sophie in British television sitcom The Job Lot. A brilliantly funny portrayal of life in a busy West Midlands job centre, and one of only a few television programmes that has made me howl with laughter all the way through each episode. Although many other people may recognise her from ITV’s Downton Abbey.
She plays her part of an Ugly Sister well, hopping about the place screaming and scrapping with her sibling. And it’s actually a perfect fit for am actress of her style; theatrical and funny. I’m glad Sophie landed a part in a major movie, good for her. Talent well used.

Sophie as Bryony in ITV’s The Job Lot

Have you ever sat and watched a movie, or television programme, in which a completely random backing actor makes you laugh heartily – yet they’re not even part of the main cast?
This happened in Cinderella.

Whilst doing the rounds of the local townspeople, the glass slipper is tried on by various women, each one trying excruciatingly to fit her foot into it with no success. Soon enough the royal footmen (pun fully intended) reach a rather plump, cockney woman in her kitchen.
“ooh, hello. Where do you want me?” she asks in a very flirtatious manner as she struggles to mount the work surface in front of her – ankle first.

I howled with laughter. A few other audience members laughed too.
I couldn’t help it. The woman was fucking hilarious – and only on screen for a matter of seconds! Whoever this extra (do they still call backing artists ‘extras’?) was, she made a massive comical impact in less than nine words. Fantastic.

Whilst I’m on the subject of the slipper, I must point out that the footwear is effing gorgeous. I assume by ‘glass’ the producers mean ‘Swarovski crystal’, because they’re – well – crystal. Beautiful though, they catch the light and sparkle with delicious clarity. I can’t really say much more than that.

..was absolutely brilliant. If there was one element this movie wasn’t lacking, it was talented cast. Cate – as Lady Tremaine – was every bit the vamp as you’d expect. From the moment she appears on screen she oozes attitude. And her entrance is very concealing (think Glenn Close in 101 Dalmatians) – clicking high heels and long coat sliding along the ground as the unknown person makes her entrance.. and then they stop, turning their head to look around, camera swooping in. This is how Cate makes her steely entrance. And it works nicely. Of course, the second her booming husky voice uttered its first sentence, I was hooked. The actress captured my full attention whenever on screen, by use of swooping bodily gestures and domineering voice. She has to be the strongest performer in the movie, outweighing Lily massively. The younger woman looked pathetic (and not just in the sense of her character) against Cate Blanchett. Sad, but true. 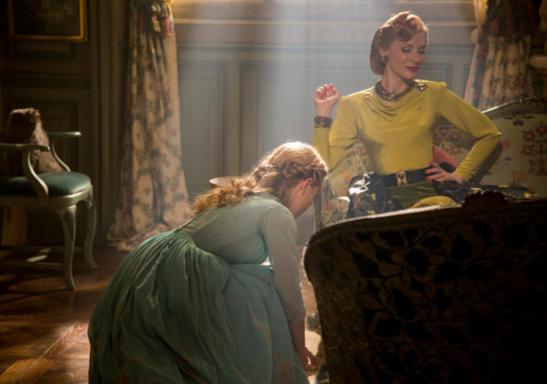 Cate makes great use of her hands; her trademark bodily gesture seems to be pointing as she speaks. Scenes such as the one where she warns Cinderella against going to The Ball see her wiggle her long spindly fingers as she scolds, “mark my words: you SHALL NOT go to the ball”.
And in other parts she’s either clasping her hands together tightly, waving her arms or emphasizing what she’s saying with a flick of her wrist. It adds to her character and makes her even more entertaining to watch.

Ok, I’m going to be picky here (again). Cinderella’s mother dies.
But what of?!

I know age-old fairytales like this one don’t carry health warnings, etc. I mean, The Gingerbread Man didn’t use his silver balls to promote awareness of testicular cancer. But the story of Cinderella – or at least this movie – gives no explanation as to why her mother suddenly collapses, and then is seen whispering her goodbyes as she lays dying on the sofa. Perhaps the undercurrent of ‘dying parent’ was highly irrelevant for the producers, but I was sat there wondering what had happened to the poor woman. And that’s it on that aspect. End of rant. 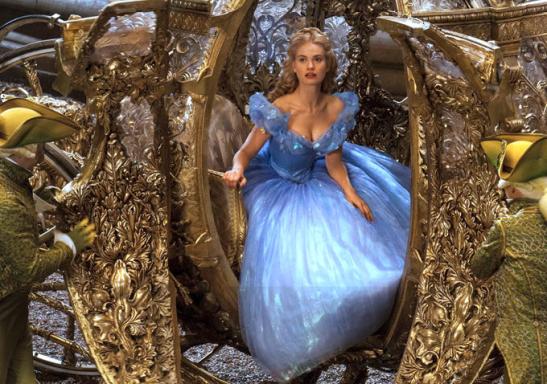 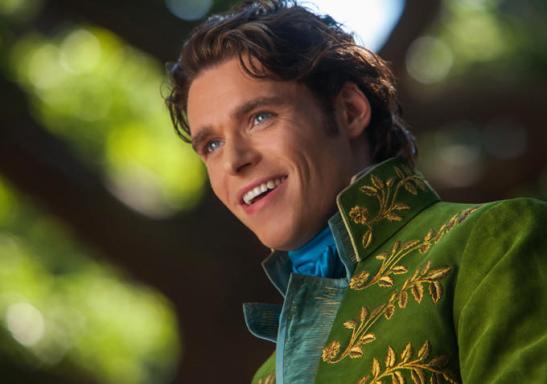 Cinderella wasn’t a bad watch at all. In fact, it was quite refreshing. So I knew the story and how it ended before the movie began, but it was still quite entertaining. All actors put a brilliant amount of energy into their roles which forms a solid structure; without these efforts, I think the movie would have flopped and become ‘just another bleak Disney..’.

Cate and Helena are what make this movie most enjoyable. The two women soar high above their co-stars and join those other superb stars of Hollywood who make family movies memorable. Overall not a bad watch. I’ve seen worse.

This entry was posted on April 2, 2015 by rickysfilmreviews.