A hard-working small business owner and his two associates travel to Europe to close the most important deal of their lives. But what began as a routine business trip goes off the rails in every way imaginable – and unimaginable.

Placing Tom Wilkinson, Vince Vaughn and Davd Franco in a movie together as the lead protagonists was just weird. Seeing the likes of British actor Tom – with his natural flair and maturity – performing against guys like Vince and James, was almost an insult to the Academy Award nominee. Let’s face it – anything starring Vince is trash anyway. The man never plays anything but himself, and radiates an air of complete immaturity. (I wouldn’t be surprised if they re-made Big and used him as the lead role). Once again, the ‘actor’ displays talents of that you’d find in a wet sock. Standing around on screen (stiff neck and as though his head is being continuously pulled back by invisible string), Vaughn shoots sarcastic and insulting wisecracks at his fellow actors. What can I say – quite literally everything you’ve seen before from him, you get again. The only striking difference being his character has a different name.

The man reminds me of an unfunny Seth MacFarlane. Deep, comic tone to his voide straight-faced in funny situations.. only he’s just not funny. Weird.

I remain undecided about my opinion on Tom Wilkinson being cast in this movie. He pulls it off, delivering where he needs to. He even made me laugh out loud with a few of his sexual slurs. But overall, the choice of cast was odd – not something you’d usually see in a Hollywood ‘comedy’. A bit watery. 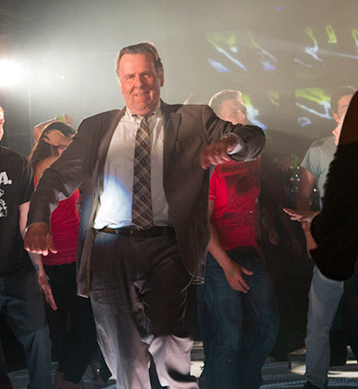 Dave Franco saved this movie from plummeting to the ground. The toothy chap was a breath of fresh air from the second he arrived on screen, carrying a box. As Mike Pancake, he brings a nervous, inexperienced and almost autistic character to the screen who joins the two older men on their journey to Europe to close a business deal. The gags involving his surname are slightly irrelevant and become a bit tedious after a while – that aside, the actor adds a dash of something Vaughn and Wilkinson can’t provide. I did notice how much of the audience laughed more whenever Franco was on screen than the other two, I personally found myself smiling at his naivety.

Had Dave Franco not been part of the cast, I fear this movie would have been even more shocking than it was. His character was different to what I’ve seen before; an introvert who barely speaks and brings new meaning to the word ‘wallflower’. Speaking through gritted teeth isn’t new – he does this in most of his flicks – but it was quite funny how due to his shyness as a character, his lips were practically glued together most of the time. But in all seriousness, he was the best, most entertaining member of the cast.
Thanks Franco.

Have you ever sat watching a movie where a particular scene makes you frown – scrunch your nose up – and roll your eyes in reaction to a line that is spoken?
There is plenty of that here.

Unfinished Business contains such vulgar humour that most of it comes across as completely irrelevant, as though forced by the producers to get laughs. But ultimately coming across as tacky, desperate. One such scene being where Chuck (Miller) stands between Daniel and Jim (a big wealthy boss they are both trying to impress). When Daniel says something (clean) to Chuck and Jim, she responds with a line about how one of the men “came on my face” – then goes on to talk about balls and penises. This attempt at the script writers trying to be hilarious came across as simply – irrelevant.

Another scene sees Daniel and his two colleagues giving a presentation to Jim and his company. Completely out of the blue and with no actual reason, Daniel faints. Then gets up, and falls over again. Then gets up. This stupid stunt continues for a minute or so before continuing to he next scene. I honestly sat staring at the screen with my chin resting on my palm, waiting for the good stuff. And another scene sees the three men sat around discussing their plans for the business meeting. Suddenly one of them mentions his wife and says how she looks like a vending machine. There then begins a discussion about how vending machines are square – but another argues they are rectangular.

..I was honestly about to walk out.

Yes – I’m talking about Vince Vaughn. And the movie.
Unfinished Business is split between adult drunken antics, and family issues. The underlying issue here is how Daniel’s son is being bullied at school due to his size. The movie flicks back and forth between Daniel living it up in Europe and speaking to his son on Skype about his problems. Tiresome is not the word – the scenes continue to jump as drunkenly as the lead character, and in the end I honestly couldn’t give a crap about what happened to his son (although it turned out the boy is also bullied because he wears eyeshadow). So what does Daniel then do?..

..puts on eyeshadow and Skypes his son to show him. 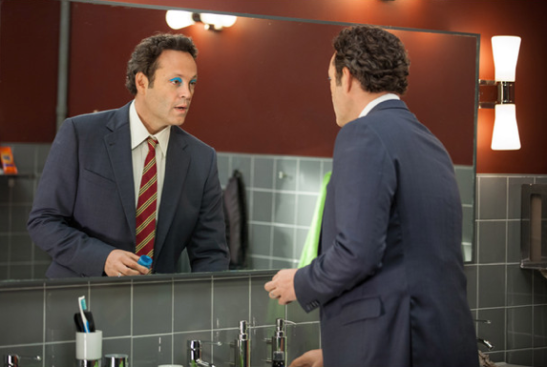 Seriously!
This was getting worse. And this was before the scene involving Daniel walking into a gay bar toilet to face penises – sticking out of the walls (glory holes). This movie definitely slides into my ‘most irrelevant’ list. The thing is, had Unfinished Business been directed properly using a better cast, the issues portrayed may have evoked sympathy on my part. But due to its awful consistency and toilet humour, it couldn’t have been less effective.

I cringed as I exited the cinema.

This entry was posted on March 14, 2015 by rickysfilmreviews.