Kingsman: The Secret Service is based upon the comic book by Mark Millar, and depicts a veteran secret agent who leads a young protégé into the world of espionage.

The 28 Ass-Purges of Bill Potter

Kingsman is a great little film. I actually uttered the word “brilliant” as the ending credits rolled. Slick and punchy (pun fully intended), it seems to take elements from a few other previous movies and binds them together to deliver a violent but entertaining story. Did you ever see any of the following?:

– Harry Potter and The Goblet of Fire

If these movies had intercourse, Kingsman would be their love child. It is a perfect blend of bad-ass violence and aggression, which centres around a very simple plot. Viewers get generous servings of nasty bitches flying through the air whilst slicing their opponents in half (Kill Bill), a sinister scenario where people start killing each other as if it’s a normal activity (The Purge), the lead male character is bursting with slick attitude as he transforms from normal kid to crime-fighting hero (Kick-Ass), and a chunk of the movie sees everyday people’s lives become absolute carnage as the general public in cities across the world smash their way through each other as though infected by some sort of violent virus (28 Weeks Later). 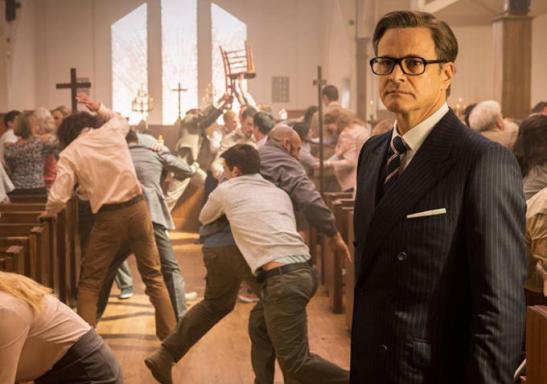 But nestled amongst all this whoop-ass action, are various tasks the new recruits of Kingsman have to complete in order to secure their rightful place – or be sent home.
One task sees the recruits dormitory fill with water and they each have to figure out how to breathe / escape. This scene was nicely entertaining, and reminded me of the Triwizard Tournament task during Harry Potter and The Goblet of Fire where Harry spends a panicked few minutes underwater, trying to rescue his friends from vicious mermaids. It contained that same ‘clock is ticking, breath is thinning’ element which gave Kingsman good dynamic. Other tasks include the recruits on a skydiving mission – with a dangerous lack of parachutes, and gruelling on-site training. 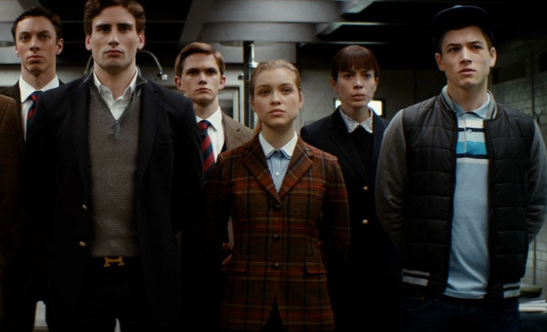 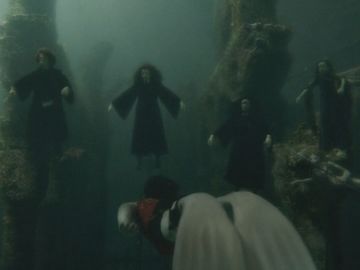 Harry Potter and The Goblet of Fire

I was pleasantly surprised at the pace of how Kingsman unfolded. The main bad guy and his assistant are introduced, the protagonist gets to work, and the plot rolls along without delay. Yes, no dragged-out scenes here. And they happen in a really punchy way too. Each scene jumps into the next quickly, so the viewer is not left wondering of subsequent action for very long. 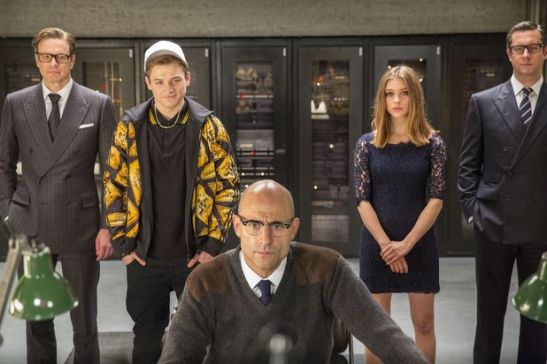 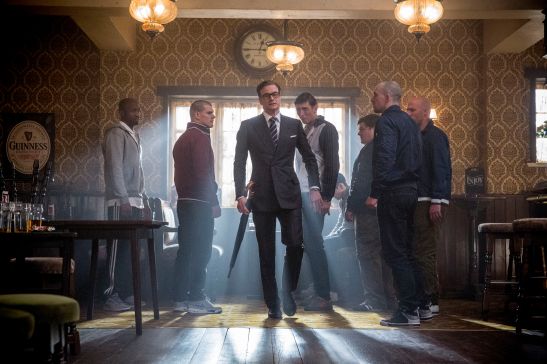 I have never in my life laid eyes on the actor before, but was instantly won over by Taron’s portrayal of Gary “Eggsy” Unwin. The man is adorable; a nice bit of eye candy for the movie (whether dressed as a total pikey or in a dapper suit), but is also a brilliant talent to add to the cast – which let’s face it, is what we need in an action movie. Talent on all levels.

Eggsy (strange, I’ve not seen a movie where a character’s nickname is an abbreviation of their real-life surname) is your classic East-End London scally boy. Sporty jacket, trackies and baseball cap, he is the polar opposite of the calibre of gentlemen who Kingsman comprise of. In fact, he’s your classic ‘wannabe black dude’. On running the risk of sounding racist, you know those (obviously) white guys who walk around speaking in the accent of a hip, too-cool black dude using phrases such as “ye get me” and “dat is sick” – this is Eggsy. But with a voice of attitude comes a heart of gold, because as the movie gets going we get to see the young chap play the part of doting older brother whilst comforting his baby sister, and exercising loyalty to his friends. And it’d not until Harry Hart (Firth) makes an appearance that Eggsy’s life takes a dramatic turn..

As I took my seat in the cinema, I was hoping Kingsman would provide us with a ‘magical makeover’ scene; like in the movie The Princess Diaries for example (Anne Hathaway). Shabby plain schoolgirl gets turned into a stunning pillar of royalty. Yes, I’m aware that this one is a Disney flick of Universal rating, but it’s the concept that I love – the fascinating process of transformation. Close-up’s of the character having their eyebrows waxed to perfection, their hair blitzed from inexcuseable to exquisite, and being put in clothing of material they’ve never even seen before let alone considered wearing. In fact, during the scene when Eggsy first visits Kingsman and Harry tells him he’ll need to make a few changes to his image, Harry mentions the movie Pretty Woman, and the young chap utters in response, “ahh, like Maa Fair Laydee?” (My Fair Lady in his deliciously ‘hip’ voice’). 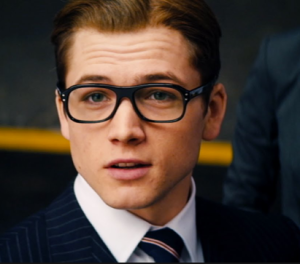 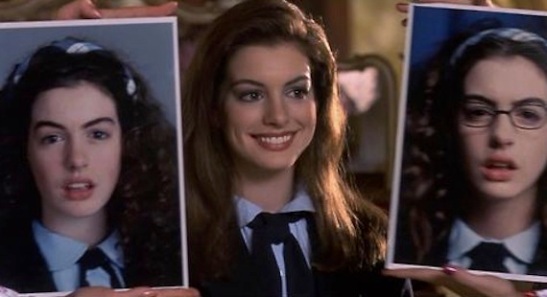 Anne Hathaway as ‘Mia’ in The Princess Diaries

Alas, as witty as this scene was I never got my ‘fascinating makeover’ moment. Although when Eggsy does eventually get into a Kingsman suit, he scrubs up very well. One or two gay men and straight women should feel a flicker somewhere down below – I certainly did. And on that note, I will add the guy’s body is fucking HOT. Taron isn’t overly ripped, but has some lovely muscle definition on him. During the scene where his Kingsman dormatory floods, I had my eyes firmly fixed on him as he jumps from his bed and hangs from the ceiling, topless. I’m a minx, I know but it made for a lovely watch.
WOOF.

I was quite surprised to see British actress Samantha Womak (nee Janus) make an appearance for a Hollywood movie. Best known for her role as feisty Roxy Mitchell in English soap Eastenders, the actress with distinctly feline features plays Eggsy’s struggling single mother Michelle. She does a good job too, as the victim of domestic abuse by her partner. With comedy comes seriousness as Eggsy returns home one day to find his mother bruised and beaten. He goes to track her partner down, but the man is a force not to be reckoned with..

Having an undercurrent of domestic abuse and single parenthood really worked. It added to the plot nicely, giving a more genuine feel to the movie. A dash of emotional seriousness in a world of secret spies and fantasy. Eggsy and his mother Michelle reminded me a little of Rose and her mother Jackie Tyler in Doctor Who. Blonde single mother living on an East London council estate, trying to break even whilst her child gets whisked off into an exciting but dangerous new world. It mirrored this same concept whilst ensuring a serious, hard-hitting theme ribboned the overall story. And Samantha does an exceptional job of playing her part.

There are some wonderfully swish gadgets and weapons owned by the Kingsman corporation. And they’re all at Eggsy’s disposal. The main tool of espionage has to be the ‘Umbrella’; a simple looking normal umbrella, which doubles into a vicious gun and shoots bullets from its stem. It also becomes an impressive bulletproof shield when opened out fully. There are spiked shoes, cleverly concealed hand grenades, fountain pens with other purposes, laser watches, televisual spectacles.. it’s a big list of wonderfully camouflaged weaponry. I found this to be one of the most entertaining elements of Kingsman – the fact it wasn’t shoving an obvious gun into the hands of a new recruit, but slowly introducing him to an awe-inspiring selection of everyday items which have other intentions. 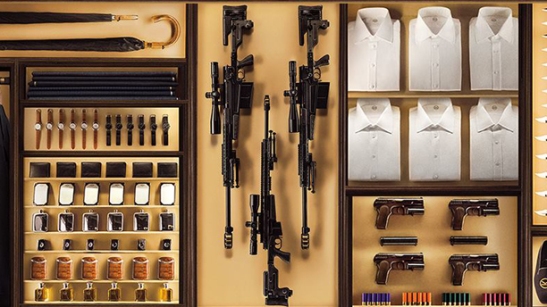 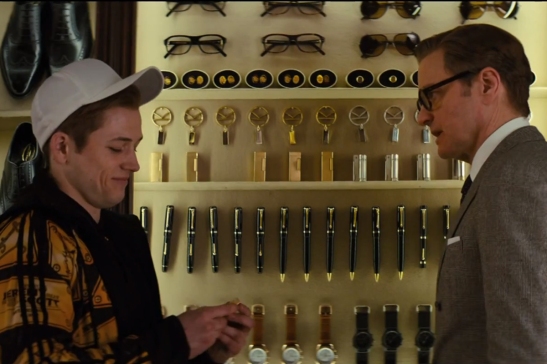 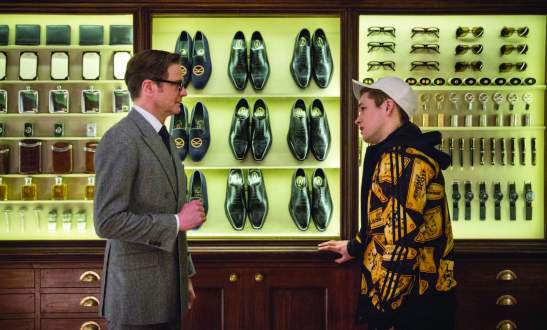 As shown in the trailer, Kingsman is the name of the tailor shop on Saville Row, London. With a shop window comprising of folded jumpers and suited mannequins, it looks to the general public like any other expensive City-based tailors. However, once a particular coat hook is pulled (secret lever) and the fitting room floor begins to descend into the depths of the Kingsman secret headquarters, we see that there is much more to this posh man’s suit shop. It’s almost a Bat Cave type scenario, and one which makes these types of movies / stories work; concealment. Even I gasped at one point when Eggsy discovers the hidden lair, and to complement all this there is a swish shuttle train which can transport people from London to halfway across the country – in seconds. Top marks here, what brilliant ideas.

Valentinre’s henchwoman Gazelle (played by Sofia Boutella) reminded me of Nicki Minaj. Straight black hair with horizontal fringe and softly set features, this woman could have easily been played by the pop princess herself. I did wonder at one point if Minaj would be the better option. She’d suit the role perfectly.
See if you can spot what I mean.

Many movies have their low’s as well as high’s, and Kingsman is no exception.
Its main flaw was the dialogue fluidity. Some gags and one-liner’s were flat, having little impact on the scene they were used in. One example would be the ending scene; Eggsy confronts a nasty character and upon this confrontation, delivers a line and an action which Harry Hart did at the beginning of the movie. The way Taron performed it was done with a lack of energy, and wasn’t as effective as it could have been.

Other dialogue in certain parts needed tightening too. Kingsman contained gripping and witty situations where the right line delivered in the correct way could have boosted the dynamics, made the situation highly entertaining. Unfortunately, the director let this slip and potentially hilarious moments never got a chance to develop.

Nearly everyone in this movie is the main character. Harry kicks the movie off with the story of how he entered a fatal mission with Eggsy’s dad – he then gets the young chap released from the police station he ends up in, and becomes the main protagonist as he mentors this young protégé into becoming something brilliant.
But at the same time, Gary (Eggsy) Unwin is equally as big a character – a young man finally on the path to success with a life-changing decision to make.
Then came Valentine (Jackson) who also seemed to be the main protagonist from the bad side of the script, Arthur (Caine) just as big a character as Valentine..

See where I’m going with this?
Each character seemed to be on the same level as the next one, therefore creating a movie whose ensemble seemed to flow on one scale – character / actor levels were lacking. And I couldn’t help thinking that maybe this took away some of the film’s dynamics. If they had played down or played up certain characters, this may have made for (a more) entertaining watch. Perhaps this proves how talented each actor is, but at the same time – could the casting have been shaken up better?..

Kingsman is the first most entertaining movie I’ve seen of this year. It’s slick, funny and really delivers a high level of entertainment. It is a prime example of a movie being based on a comic that turns out splendidly. But with splendour comes seriousness, as the movie blends fantasy with everyday issues some people experience such as lack of career, abuse and bereavement. Kingsman gets top marks from me for touching on these issues whilst bringing an intriguing story to life.

As mentioned, I don’t think selecting actors who were all as strong as each other was the best move, as it gave no room for me to pick a favourite. Still, I enjoyed Kingsman. A great way to pass 128 minutes.

This entry was posted on February 2, 2015 by rickysfilmreviews.