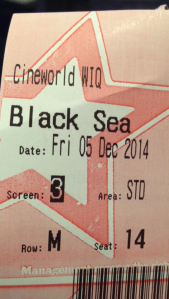 In order to make good with his former employers, a submarine captain takes a job with a shadowy backer to search the depths of the Black Sea for a submarine rumored to be loaded with gold. 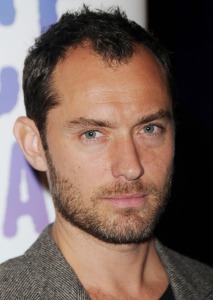 The great thing about Black Sea is that it gets into the gritty story immediately. Literally, as I sat watching the opening scene, I wondered if this would be one of those ‘nautical men sat round a table discussing their plot for seven minutes’ bores. Seven minutes is a long time when you’re sat staring at a screen – look at Jaws. A few scenes which see the sea men (ha! I said seamen) sat at their boat’s table, swigging beer and wittering on with excruciatingly boring small talk. Hate it.
Black Sea?.. loved it.

The movie opens with Captain Robinson (Law) sat in front of a suited representative who delivers some shocking news. This jumps immediately to the next scene where he is sat with friends in a pub, discussing a brilliant plot to get rich, which then jumps straight into the water as the group of men involved in the plot take to the sea in search of a life-changing stash of gold. And there you have it – bish, bash, bosh. Clear. Simple. Movie gets going. This element certainly scores points from me for its excellent fluidity. I could tell from the start that this would be one of those gems I’d snap up instantly if I saw it for a fiver online. It contains all the ingredients of a low-budget thriller: strong cast, great plot, nice special effects, great script, tension, slight claustrophobia.
Black Sea is simple but effective. It works. 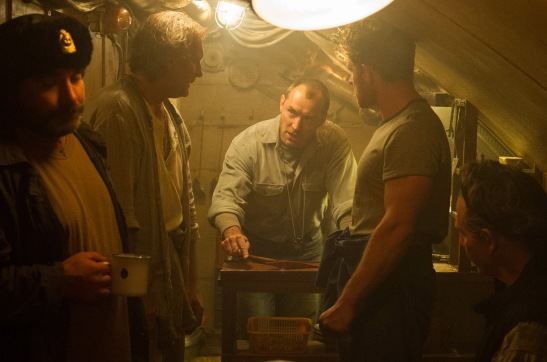 The plot focuses on Captain Robinson and his headstrong search for ‘Hitler’s submarine’ which is rumored to be loaded with pure gold. And – like any other tense thriller set in one space with an all-male cast – the atmosphere turns nasty pretty fast. It’s not long before members of the crew begin to turn on each other, their judgements clouded by the thought of millons of dollars worth of gold. This results in certain characters being bludgeoned or knifed quite harshly.
My only quibble with this was – like the opening – how fast it happens. The crew descend beneath the Black Sea, start their mission, then the killing starts. Although the movie contained some great tensity, this serving of it came about far too quickly; not helped by the hatred toward the Russians felt by the English. Quite literally, all a Russian had to do was drop a saucepan and an English pounced at him with a knife pressed against his throat. I didn’t like this. The boys were working as a team, yet had nothing but immediate contempt for each other. The relationship development didn’t spend any time developing – it just happened without any build-up of tension. 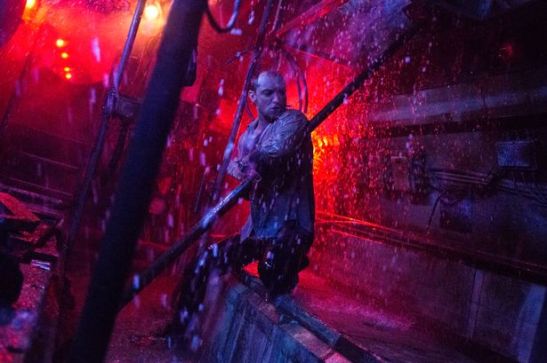 We see a major case of culture clash in this movie which is one of the main ingredients, however fast it comes about. 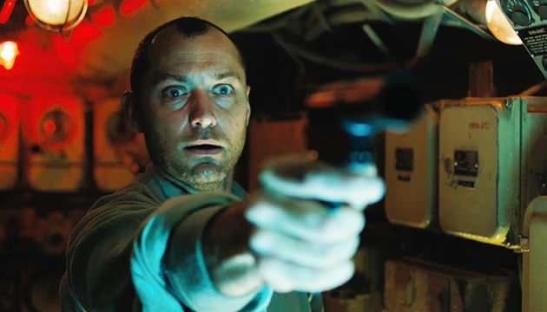 Much of the dialogue delivered by certain characters had me and most of the audience laughing out loud. I didn’t expect to be comically entertained, but there were parts where observational humour reigned.

Bobby Schofield was absolutely fantastic. His performance as a homeless Scouse teenager Tobin was spot-on, emotional and very genuine. But it wasn’t all sad times. The multi-talented actor had the audience laughing heartily with his naive one-liner’s. At one point, there is a serious scene in which an urgent need for another man to exit the submarine arises. Tobin stands ther and pipes up with, “I’ll do it. I did ‘scuba with the U Club”) – the audience hooted with laughter. Like a jester, he turned a dark, dangerous situation on its head. The lad certainly brought a fresh dynamic to what could have been a very dark film. In fact, I warmed to the character after his first few screen minutes and already wanted him to be the last survivor. 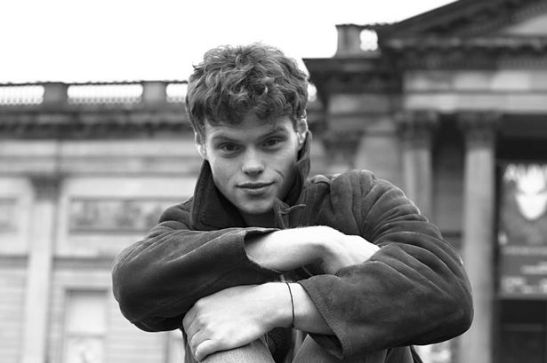 I found the seabed trek fascinating. To be honest, anything ‘forbidden’ excites me. When I say forbidden I mean untouched, naturally private places where only certain humans get to visit. Like the incredible surface of a different planet or venturing into undiscovered depths of outer space. A nice example would be 2003 sci-fi flick The Core. A group of explorers drill down through the earth until they land in the centre of the actual planet (which turns out to be constructed of gigantic amethyst-style crystals). Brilliant.

So here we have a gang of skippers on a submarine at the bottom of the ocean.

The gloomy depths create a deliciously eerie atmosphere; we get camera shots which pan across the seabed, the sub sitting still. The dark waters stretch for miles into the watery distance. Complementing this are random groans from the sub which echo into the waters. I enjoyed the part where the three divers exit the vehicle and slowly trek across the seabed. Their flippers sink into the soft sand / stone as they dicscover their target and hover towards it. A great little scene which, as I mentioned, displays humans treading ground where hardly any others have been. Nature’s private area. Forbidden. I love it. My fascination continued a few seconds longer as the boys enter Hitler’s dead submarine, and Tobin asks if he can remove his helmet as there is no water inside. To which one of the others responds how crucial it is to keep it on, as the air inside the sub has turned to poison gas over the years. And a few minutes later, the beautiful stash of gold is discovered – glittering solid bars of delicious gold.. 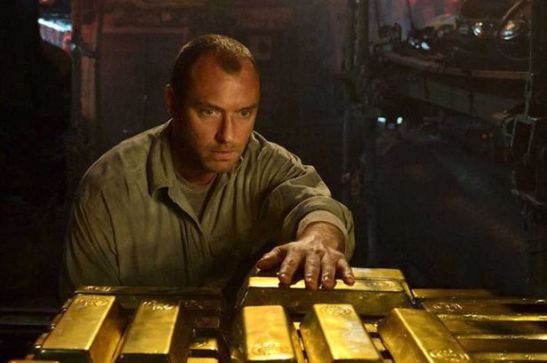 My god, this was turning out better than The Goonies.

Black Sea is a great little thriller. While Jude Law’s Aberdeen accent remains a constant distraction, the movie flows at a good pace. No room for lengthy boring scenes here as director Kevin Macdonald throws the audience into the sea immediately, and ensures the viewer is swamped in tension and claustrophobia.
Simple plot, easy to follow, interesting underwater sequences, excellent humour.

I think one of the main enjoyable elements was the fact it is an all-male cast, but very varied in personalities. Unlike other ‘working men’ movies with macho characters who generally seem similar, this bunch of skippers vary drastically. An older northern gentleman, an manipulative late thirties Australian, a hilarious eighteen-year-old lad from Liverpool, nasty Russian meatheads.. the dynamics are brilliant.

And the ending – wow. It’s a proper “you’re fucked. But kind of not fucked too” scenario.
Black Sea turned out to be totally different to what I anticipated. I love it when that happens.

This entry was posted on December 7, 2014 by rickysfilmreviews.