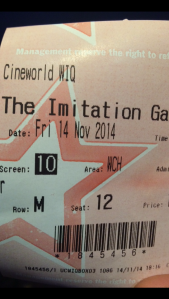 The Imitation Game was just brilliant. I honestly didn’t know what to expect from this movie. I had the few obvious elements to work with; homosexual smart guy, World War 2, code breaking machine. And from these elements my first thought was, “dull period drama lengthened out with factual dialogue”.

Completely the opposite.
This movie won me over immediately from its opening scene through to its sad, heartfelt ending. And the main element of its success: humour. What I expected to be dull and serious was wonderfully witty and entertaining. Of course it has its serious parts (in which I genuinely felt sympathetic toward the lead character), but otherwise The Imitation Game had the cinema audience laughing out loud joyfully, thanks to its comedic dialogue and brilliantly slick performances delivered by the cast. Which included a gentleman who really surprised me, and changed my opinion of him massively..

Just fantastic.
Benedict Cumberbatch had the audience roaring with laughter and gasping in surprise. The actor displayed brilliant levels of dynamics throughout this movie; his comedic timing was spot-on. His tragic sadness was just as powerful. The movie was bordering on laugh-a-minute as Cumberbatch dropped hilarious one-liner’s complemented by brilliant facial expressions. I should highlight this bit (his face) because the actor’s characteristics were excellent. Benedict’s way of sitting wide-eyed and staring at another character innocently had me laughing out loud. His character is straightforward and incredibly honest about everything, so most of the lines the actor delivered blended with such facial expressions was like oxygen to fire. It was incredibly effective, I loved it. 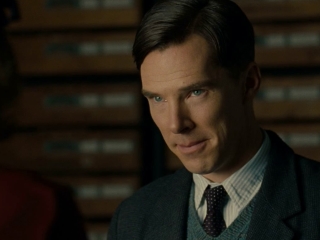 I honestly believe the key to this movie’s success is how it was written, and how the lead actor delievered his role.
Very rarely does a movie of this nature keep me engaged, I normally grow tedious of the lengthy way in which some directors try to shove as much politically correct, factual bullshit down our throats. This one was different; it wasn’t only punchy and moved along with great pace, but never failed to entertain me as I sat there watching. And because I was entertained, I became more and more interested in character development. Bingo – the magic ingredients.
And I haven’t even got to his on-screen chemistry with a certain plucky Brit yet..

From the second she came bursting through the doors as sharp-witted Joan, Keira had me hooked. Her first scene had the audience laughing out loud – the expression on her face as she utters the line, “you said to do it in under six” (referring to a test set by Turing) was subtle and took hardly any effort on Knightley’s part, yet was effing hilarious.
She also displays some wonderfully funny facial expressions throughout the movie. The pair are a match made in comic heaven, as their pairing proves.

I never used to be a fan of Keira Knightley but I must say, she’s doing well. The actress seems to excel at comedy, being in full force in The Imitation Game. I think that slight smirk she has constantly printed on her lips adds to that dry – slightly sarcastic – humour she radiates. Which is a good thing, obviously.
Good show from her.

If you’re into codebreaking mysteries or top-secret style features, I have no doubt you’ll enjoy The Imitation Game. The movie is fuelled by secret messages and cryptic problem solving which, I must say, added an air of excitement to the overall plot. I found myself engrossed in the scene where the team of code-breakers actually crack the code, revealing a life-changing plan of Hitler’s. Alan and his team of men stand around a table, dumbstruck as Joan reads out the Nazi message they have deciphered. I found this scene intriguing, exciting, not at all boring. As I mentioned above, some directors really drag things out and make movies or programmes set in Churchill’s era grey, tiresome. Morten Tyldum managed to construct a movie which flowed at good pace and with punchy scenes. Points scored here.

Oh, and keep your eyes firmly peeled when Alan starts up his infamous machine. The way the big bastard spits and clicks into gear is a pivoting moment of the movie, and highly relevant. 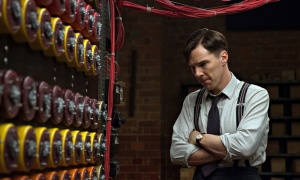 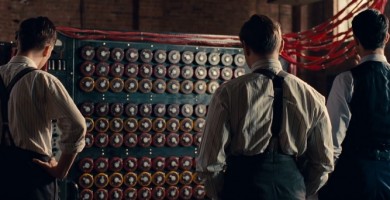 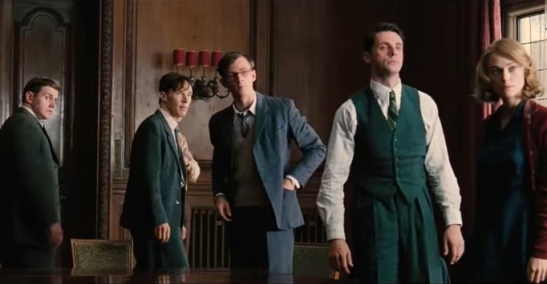 I dislike movies that smother the audience with copious amounts of war footage; be it soldiers marching slowly across grassy plains or using not just a bit – but nearly all of a president or prime minister’s speech. Yes, I am aware how important and relevant these things are, but it’s also boring and slows the action down. The Imitation Game manages to balance the scales perfectly, by giving viewers a taste of what is happening ‘out there’ before returning to Alan and his team who race against time to win the war. Quite literally, the scene jumps from our lead character bent over a table, to a clip of Hitler menacingly turning round looking out across his sea of followers, and back again. Then in a different scene, Jean is seen looking up at their plotting map before a scene blends in, showing Nazi aircrafts gliding through the air – a bit of this for a few seconds – and it’s back in the room to continue the exciting journey with the code breakers. These cutaway clips are also great graphics, move with nice clarity.
Slick. Punchy. Productive.
More points scored for this.

I spotted Tuppence Middleton halfway through this movie.
The almost-actress who directors seem to throw randomly into various features, but who never seems to land an actual main role. I remember first seeing Tuppence in Trap For Cinderella (a bloody awful independent C-list film) back in 2013. Then she popped up – for all of roughly 4 minutes – in The Love Punch as on-screen daughter of Emma Thompson. Suddenly she pops up in A Long Way Down – for a few minutes. And now she’s in The Imitation Game as Jean’s best friend Helen – for one scene, lasting about 3 minutes in total.

Now either this actress is a glorified extra, or she’s not quite good enough for directors to want to use her talents for very long. I won’t lie – the actress isn’t bad. She delivers her parts without fault, even has a face for screen. It’s just she comes across as the actress at drama school who ‘never landed the main part, always got stuck in the background’.
In the movies nowadays, we get half a Tuppence – a few minutes on screen before disappearing, as if directors throw her in for a bit of peachy-skinned eye candy, before yanking her back out again and sending her on her way with a cheque.
What’s going on Tuppence? Are you in or out? Actress or extra?.. 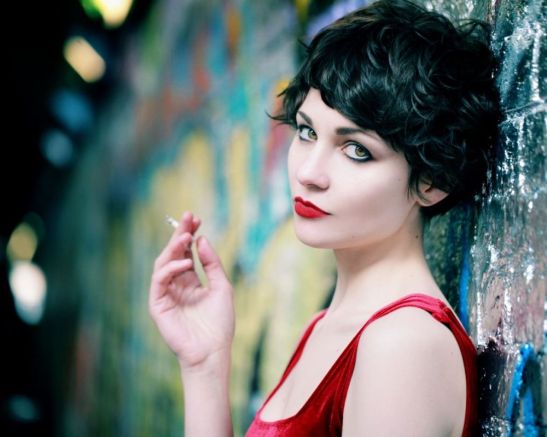 The Imitation Game is a wonderfully engaging movie, brought alive by a very talented actor. Benedict nails his part with 100% passion whilst Keira only adds to to this, creating a splendid on-screen partnership. The facts of Alan Turing’s troubles are laid bare with raw emotion, thus radiating an air of sheer sadness towards the end of the movie which made for interesting viewing – laughing heartily during his antics, before toning down and appreciating his journey.

I think the recipe for Benedict’s success here is the ‘less is more’ element; it’s not as if the actor stands waving his arms and yelling at the top of his voice, he doesn’t need to. The fact he simply stands still, wide-eyed and speaking in a soft, intelligent tone is enough of a performance for him to be brilliantly entertaining.
I honestly didn’t think I would like this movie. But it turned out to be one of my highlights of 2014.

Well done Benedict and Keira.
You nailed it.

This entry was posted on November 22, 2014 by rickysfilmreviews.