From the trailer, I assumed this movie would be (and was looking forward to) intensely terrifying. My hopes were dashed as I sat through 99 minutes of twisted psychological strangeness. The Babadook was nowhere near as BANG! – “shit!” (biting bottom lip) as I’d hoped. I was disappointed. However, that doesn’t mean it was a total flop – because what it lacked in the shit-your-pants department, it made up for in talent. Lead actress Essie Davis blew me away with how strong a performance she gave, while little Noah Wiseman complemented her in the way Robin does Batman. A brilliant duo.

The Babadook delves into the psych of a troubled – mainly by sleep deprivation – mother who struggles to maintain a bond with her son. As the movie progresses, we see Amelia grow closer to little Samuel but their relationship is thwarted by the paranormal irritant Mister Babadook, thus being pulled apart again. This movie focuses on a more psychological plot; an exhausted mother on the verge of suicide failing to keep her son who has extreme behavioural issues under control – which is pushed along by a dash of sinister supernatural happenings.
I don’t think I’ve ever seen a movie like this before. Where it splits in two directions – emotional story, terrifying demon. But somehow, it worked.

If I’m totally honest, I couldn’t take my eyes off the screen during scenes involving Amelia (which was basically the entire movie!). I felt sympathetic toward her character the whole time, almost saddened by her struggle at bringing up troubled Samuel whilst her own sister Claire lacks any sort of support and seems to shrug them off. This act of selfishness was heart-wrenching to watch, and it was this blend of realistic family strife people genuinely experience with supernatural havoc that made The Babadook one of a kind.

Australian actress Essie Davis won me over immediately, and continued to do so until the end credits rolled. The woman displayed an incredibly extensive array of dynamic; one minute she’s sat on a chair strait-laced, licking an ice cream in a moment of peaceful contentment, the next she’s kneeling on the floor with blood-curdling screams tearing from her throat, sweaty hair straggled across her face, tears running dow her cheeks. This is an actress who needed to become an actress. Her performance techniques exceed even the most dedicated of famous West End theatre cast. Nothing Amelia did was of low energy or unbelievable; on the contrary everything she did was convincing and powerful the entire time. Although as bland as un-sauced pasta in looks, I literally cannot fault anything about her performance.

Noah Wiseman is a cute little thing (except when squealing with cross-eyes and claw-like hands in the back of a car of course).

His on-screen relationship with Essie Davis was hard-hitting and very convincing. As mother and son the pair radiated an air of talent, the chemistry between them was just fantastic. Again, there were plenty of heart-wrenching moments, the most subtle of actions being extremely powerful. For example, Amelia sitting on the edge of his bed as Samuel wraps himself around her, sobbing like a baby. Or possibly the most emotionally stirring of moments where the camera overlooks them both laying on her bed, she faces away from him, he tries reaching out to her by putting his arms around her, but she pulls him off her and shifts closer to the edge of the bed.
This child wants – needs – its mother. It craves to be embraced, loved. But the mother feels the mirror opposite. How awful.

I hate scenes like that.
Aside from a dog being pulled by its ear or something, a child being neglected proper saddens me. Especially when Samuel cries out to his mother, “I’m going to protect you, will you protect me?” – I almost had tears in my eyes.
So, once or twice I did feel so sorry for Samuel that I just wanted to give the poor thing a hug.

On a serious note, if cruelty to children upsets you then The Babadook is NOT for you. The undercurrent of child abuse runs strong throughout this movie, be it psychological or physical. 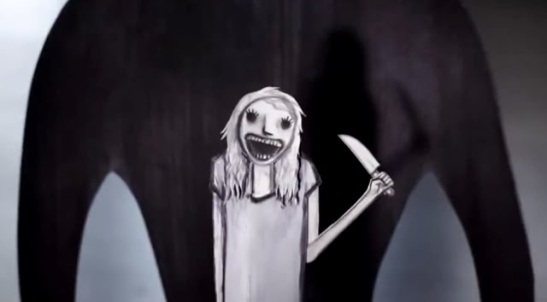 It’s quite different, a horror movie set in Australia.
Probably about 75% of the world’s most popular horrors are set in the USA aren’t they.
Texas Chainsaw Massacre, A Nightmare on Elm Street, The Conjuring, Insidious, Wrong Turn, Paranormal Activity.
So when a feature from Australia pops up, I wonder how it will pan out; first off – the accent. A victim running scared from a predator whilst screaming – in Australian accent? I would probably laugh. In fact, during the scene where Amelia and her sister Claire sit on a bench talking seriously about Amelia’s life, I found myself smiling at Claire’s voice – however serious her dialogue was, she instantly reminded me of Kim from television comedy Kath & Kim. I can’t help it, the Aussie accent (when spoken in a certain way) makes me giggle.

Accent aside, the whole atmosphere generated by an Australian cast brings something different to the movies; a less slick and cheesy feel than Americans, more genuine and honest – like the difference between white bread and wholemeal.
The Babadook is a horror movie with a genuine feel to it which included superb talent. It wasn’t the best movie I’ve ever seen, but it was very diverse.

The element I enjoyed most had to have been the ‘monster under the bed’ role reversal. Watching a grown woman cower under her duvet at the sound of her closet door opening, watching her pull the cover back slowly to get a quick glance at whatever it was that was creeping towards her. Usually it’s classically a child doing this, but this time round both child and mother are prey to a terrifying, unseen presence.
The Babadook creates a feeling of dread – even when the enemy is nowhere to be seen.
During some scenes, suspense builds slowly which makes it more subtly scary. There aren’t many heavy supernatural scenes – which loses points from me as I love a good scare – but as mentioned above, the plot remains strongly psychological. The feeling of dread is present, without the Babadook being around to create it. 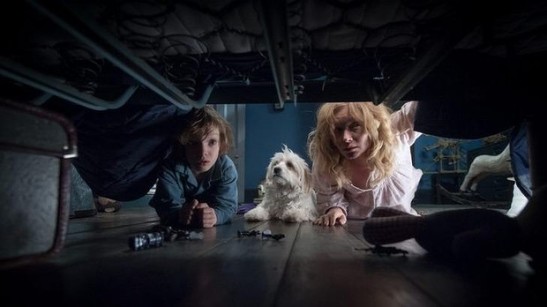 It is never quite explained what the Babadook is or why it is there. The storybook appears out of nowhere, scares the shit out of the mother and her boy, and wreaks havoc without fully exposing itself. There does seem to be an underlying link however, as Amelia begins to hallucinate about her deceased husband – which made me wonder if the Babadook had something to do with him. Was the monster actually her husband?
A creature from the afterlife?
Had her husband crossed over but the Babadook hadn’t and was pissed about it?
A monstrous tool to help Amelia or her son grieve?
Points scored here for the question mark element – it certainly got me thinking and wondering throughout the movie what the creature was and why it was even there. This was turning out to be a real brain-baffler. 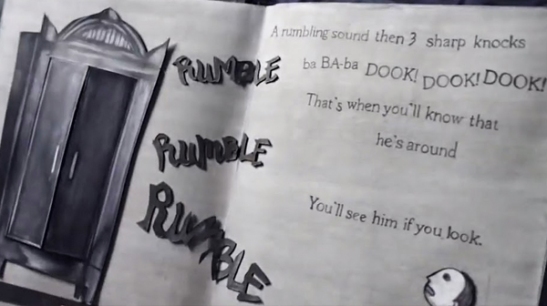 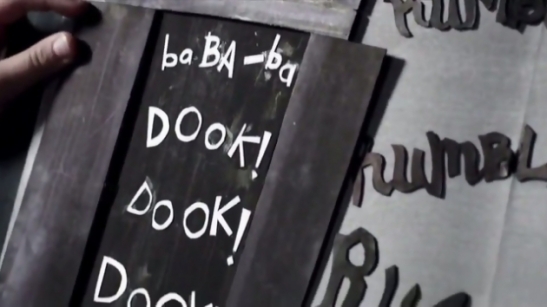 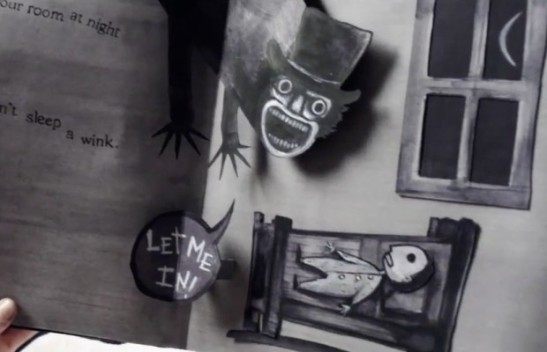 Usually in this type of horror, we see the protagonist rush to a stranger who fell victim to the monster previously, to seek advice on how to destroy it. Here however, she doesn’t. The mother and her little boy are sitting ducks as they accept they’re (more or less) fucked.

In horror movies when the main character or family is being hunted by a nasty bastard demon, why do they never:

A) invite a disbelieving friend or neighbour over to stay?

B) record the supernatural events on video and hand a copy of the tape to a neighbour before the demon destroys them and the video camera?

Instead what we get is a distraught, sleep-deprived character who can only face the monster alone in their house and for some bizarre reason fails to call on the help of a smart nextdoor neighbour. Amelia does mention to her sister Claire that ‘someone’ is stalking her and Samuel but Claire – the most sympathetic sibling in the world – couldn’t give two shits and ignores her.
Get the neighbours involved – ask a few of them to keep an eye on the house, or get them to watch what you record on camera (if the Babadook isn’t only visible to Amelia of course – then she’s screwed).

I had the same opinion during Paranormal Activity.
Katie and Micha experience shocking events within the confines of their own home – yet its as though they are the only two people living on their street. No one seems to get involved, not even a neighbour – what is it with these people in horror movies? They live a few feet away, yet remain blissfully unaware behind their curtains their neighbour is being thrown around the ceiling by a supernatural menace.
I think the only horror movie where I’ve seen the neighbours genuinely get involved was 1982’s Poltergeist – where the family’s house collapses into itself and disappears in front of them, and the rest of the street.
There we are. That brought the neighbours together. 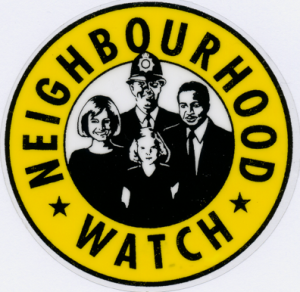 What all house-based horror movies need

What Did You See?!

Most of my review points to the fact Mister Babadook remains subtle and unrevealed, but as the movie nears its twisted (in every sense of the word) ending, one or two revelations are made.

The words in the book read something like: ‘and when you see what’s underneath, you’ll wish you were dead’

And during the final scene where a confrontation between monster and mother take place, Amelia is stunned by a bright white light. She is almost knocked off her feet as her mouth hangs open in shock-terror at what she witnesses before her.
..but we never see what she saw.

She subsequently locks the Babadook in their basement and ensures the door is deadlocked with many bolts. When the following day, Amelia goes to take a bucket of worms down there to feed it, Samuel asks, “can I see it?” – to which his mummy replies, “when you’re older”.

WHAT DID YOU SEE AMELIA?!
WHAT THE HELL IS THE BABADOOK?!

I loved this.
Got me guessing.
Got me wondering.
Got me yearning to see what was underneath that top hat and cape.

The fact that Mister Babadook could be anything was excellent; the monster could reflect a personal fear of its victim’s and be what Amelia is most afraid of. It could be an alien. Perhaps its a forbidden peek into the future at what we or the world become?
It could be anything.

I will say though, it had me laughing out loud at the point where Amelia – clutching Samuel in her arms – screams, “YOU…ARE…TRESPASSING!!!” at Mister Babadook.
Where else would you hear a line so out of place yet incredibly relevant?
Brilliant.

The Babadook is one of a kind.
Deep and sinister, it delves into the psych of a vulnerable mother and her innocent son, awakening more pressing issues than just a simple jumpy horror movie. Where this movie excels is its ability to balance rocky mother-child relationship issues with an undercurrent of horror. The feature is brimming with emotional dialogue, played out wonderfully by a double act who are genuine and faultless in their acting.
This is the first time I’ve ever seen Essie Davis – and I’m sure it won’t be the last. As for little Noah Wiseman, he was adorable and had me smiling one minute, bringing tears to my eyes the next.

This movie is weird, but artistic.
Emotional but scary.
Bland but bold.
Don’t expect to be scared senseless or blown away by The Babadook, because it’s not overly terrifying or groundbreaking. But it is a movie completely on its own level. Which let’s face it, is what we need more of these days.

This entry was posted on October 26, 2014 by rickysfilmreviews.