Thomas is shaken awake. Coughing up a strange liquid, he staggers to his feet and tries in vain to escape the upward-charging elevator cage he appears to be stuck in. Suddenly, the elevator comes to a stop. The cage opens. And Thomas is faced by a crowd of strangers, all looking down at him.

As he slowly adjusts to the strange community he is now part of, Thomas is also faced with a towering problem.
A maze. A maze which stands between the community and life on the outside. Surely running around a maze would be an effortless feat?
No.
Because it’s not just a maze. There’s something else behind those walls.. 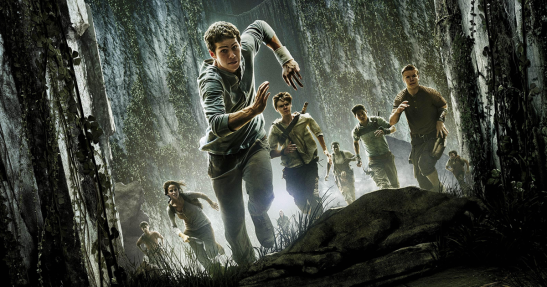 My main criticism of this movie is the sheer lack of suspense provided throughout. It is disappointing for a movie of this nature to lack suspense and intrigue – but completely rare for this downfall to remain consistent throughout. The element of non-surprise radiated from the screen the entire time, in fact I felt so indifferent, I couldn’t even sympathise with the characters at the end. The credits rolled and I was straight out the auditorium door.

That aside, I did have one burning question:
Why did nothing come over or go over the TOP of the maze?
When Thomas first arrives by box at The Glade, his main concern is what exactly is on the other side of the sliding walls which mark the entrance to the maze. “..nothing gets through those walls” a resident tells him. Fine, but I couldn’t help wondering what the fuck would be coming over the top! All mazes are surrounded by mesh or walls which keep the seeker inside, but generally they are open-topped are they not?
..so how did the Grievers not manage to scurry over the top of the walls? Total mystery.

Do They Have To Let It Linger?

One thing that pissed me off royally during The Maze Runner were the moments of vague responses coming from various characters. A prime example is when Thomas first arrives and asks where he is and what is on the other side of the maze. Alby – who appears to be one of the group’s ringleaders – turns and gives Thomas a long, lingering look.

…the look becomes a gaze.

..the gaze becomes a slight smile as Alby ignores the question and replies with a different subject of conversation.

Fake, boring and lacking any interest, I tutted at how obviously recycled such a response was. I’ve seen this in movies in the past, but these kids – it was as though they were using the classic ‘delayed-I’m-not-going-to-tell-you’ response on purpose to mock it, not genuinely mean it. The actors milked it to the maximum, bringing an atmosphere more tedious than tenterhooks. Thomas A.K.A. Greenie, doesn’t help the vagueness of the situation as he swallows tiny bits of information, accepts them and moves on. If that was me, I’d not let the bastard go until I had the facts I’d demanded. Instead, our hero continues with his day, no questions asked. This movie was already tedious – and it had only just started.. 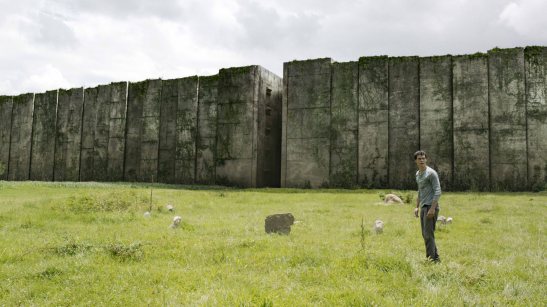 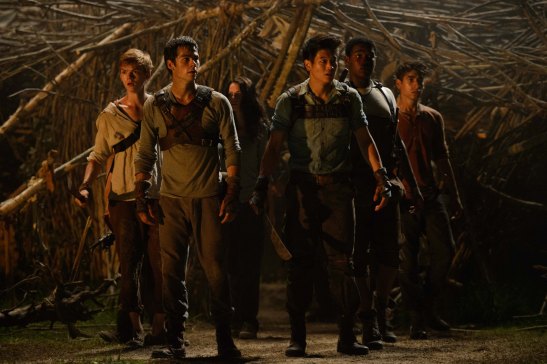 Most (not all) of the dialogue in this movie was just AWFUL. One-liner’s and punchlines delivered in a way that would make stand-up comedians cringe the world over. Scenes which saw a handful of the Glade residents faced with an unusual situation, resulted in one of the characters dropping a gem which had absolutely no effect on the audience. On the contrary, the dialogue containing humourous language was delivered in such a half-arsed way that what could have been funny and gained a chuckle or two, evaporated immediately and was no more effective than a person saying “hello, how are you?” to someone.
The script in general was mediocre and very unfunny – I think I’ve laughed more during a horror movie. Yes, The Maze Runner isn’t supposed to be a comedy, I get that – my point is that lines which would / could be funny in any other movie just weren’t in this one, resulting in making the teenage actors look like total idiots. 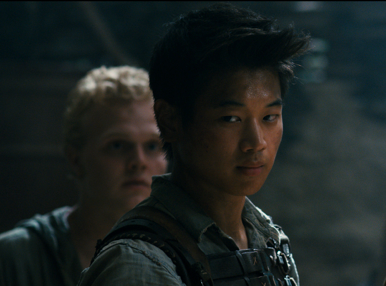 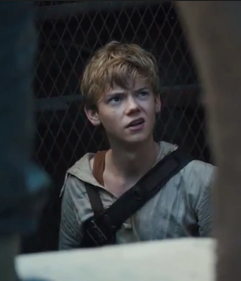 Imagine The Hunger Games and television series Lost had a baby. Now imagine that baby is boring. Welcome to The Maze Runner.
This movie borrows elements from both features and recycled them for its own plot. For example, the whole concept of a handful of strangers being stranded in an isolated environment, having to endure bizarre and cryptic situations in order to survive – this mirrors the whole Lost idea. And of course, the victims / game players being no more than 17 or 18, wielding weapons with fury as they run around the inside of a gigantic grassy area and maze – I’m getting a whiff of The Hunger Games.
Whilst this movie is a fresh idea (the use of a maze) it is nothing I haven’t seen before. If The Maze Runner was a brand new app for the iPhone, it’d be one that you think is going to be entertaining and useful – but ultimately end up deleting it a few hours later.

The irony is fitting actually, because whilst I’m on the topic of ‘Hunger’, I did have one burning query during this movie: how the token fat kid was fat? When Thomas first arrives at The Glade, he immediately befriends a sweet little lad named Chuck. Curly haired and wobbling constantly, the kid seems to follow Thomas around – being placed in the background of every scene possible. Thomas is sat crying – Chuck sits on the side of the camera lense, wide-eyed. Thomas sprints through the maze entrance – leaving behind a wide-eyed Chuck. Thomas discovers a revelation on how to finish the maze – there’s Chuck again! (he the director’s son or something?)

And as the movie continued, I found myself wondering, “..if these kids have been trapped in this grassy area with nothing but vegetables to eat and a constant source of exercise being RUNNING (around the maze), HOW is Chuck still chubbier than the rest of them?”
Call me pedantic – but it’s true. Director’s don’t seem to stick true to the story nowadays, they use actors who look as though the characters are starving – but one of them somehow has a secret stash of Twinkies in his bag. Take Jorge Garcia who played Hugo (Hurley) in Lost – I actually remember a friend asking me once back when it was aired, “how come they’ve been on an island for years and he’s still fat?”..

Christ knows.
But it remains a mystery in a story like this.
Anyway, moving on..

One scene surprised me a little; when Thomas and Minho venture further into the Maze, they are burdened with a dead body, and the Grievers are closing in to get them.
As the metal claws scurry toward our two admirables, what’s their first decisive action?..

..to create a makeshift pulley system which will raise the dead body and secure it in a mesh of juicy green leaves high up one of the Maze’s internal walls.

That’s right, instead of facing the obvious, the boys take a minute or two to ensure a proper funeral service instead of actually acknowledging the circumstance that they may die themselves. I rolled my eyes as I sat watching the pair hoist the lifeless body into the air, at the sound of incoming deathly creatures. I mean, there’s a time (scale) and a place for niceties but for fuck sake – these two manage to pause, wrap and tie the body securely in vines, then perform a nifty bit of handywork as they give the victim a leafy lay-in.

But then hey, what does a person do when they’re about to be hit by a speeding truck? ..pause to check the road markings are freshly painted and maintained of course.

I just can’t decide if Willy is sexy or not.
Yes I’m talking about Will Poulter, you dirty bitches.

The pudgy-headed English actor looks to be enjoying a steady growing career in film. From Eustace Scrubb in The Chronicles of Narnia to Kenny in We’re The Millers, Will appears to be doing nicely. And that trademark pout of his; by god it must be every gay and bisexual man’s dream. Seriously, it must be like sticking your pudding-pop in a giant inflatable Polo. Wow..

During The Maze Runner last night, I sat watching the actor do his bit on screen and decided he is a strong talent. He outweighs all of the young adult cast, including Dylan O’Brien who seems to have one solid monotone emotion all the way through. Will is his own mini whirlwind of talent, tearing through this film with a consistent and believable performance. He was a vulernable yet cheeky Brit in this year’s Plastic, just plain odd in We’re The Millers, and now – an aggressive, strong leader in The Maze Runner. It seems there is no stopping the actor’s talents. I just can’t decide if he has sex appeal. He’s not the most striking of chaps – in fact, when his matchstick-thin eyebrows arch on his sweaty round face I almost grimace – but that pout is a sure runner-up behind Angelina Jolie. If his lips were slightly bigger I’m sure he’d be doing adverts for Chapstick. 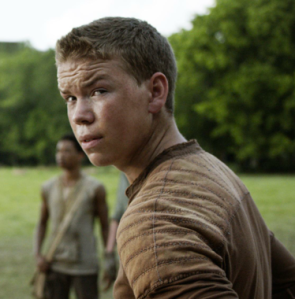 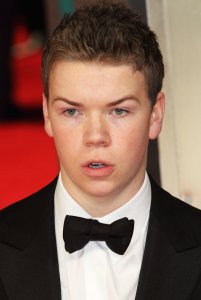 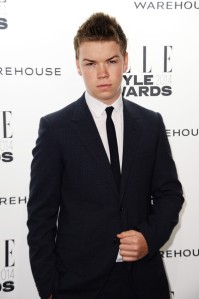 The Maze Runner wasn’t overly a-MAZE-ing (see what I did there?).
Fit for young children and teenagers, but otherwise contains about as much excitement as fungus. While there are a few tense scenes, the overall atmosphere remains tame at best – this is a feature which should’ve been condensed down into a children’s TV show for Nickelodeon or CITV. Not placed on the big screen to flop epically. The ending is rather crap also, summing up the reason behind the Glade and the Maze in just under 1 minute – and it wasn’t until this 1 minute I realised that the movie was a post-apocalyptic one. But by the time I thought, “ooh – I love post-apocalyptic movies” the bloody thing was over.
Still, it filled an hour or so before the next movie I was going to see, so I’ll write The Maze Runner off as a warm-up.

2 comments on “The Maze Runner”

This entry was posted on October 11, 2014 by rickysfilmreviews.