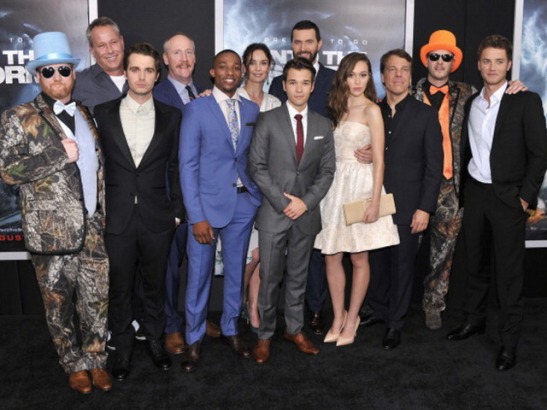 I have to say, although the movie centred around an extremely cheesy plot, the graphics weren’t bad. In fact, they were rather impressive. Many of you may instantly recognise this movie from its trailer, where a ‘firenado’ wiggles its way along a road. I was anticipating this scene with sheer glee as the trailer made it look beyond tacky.. 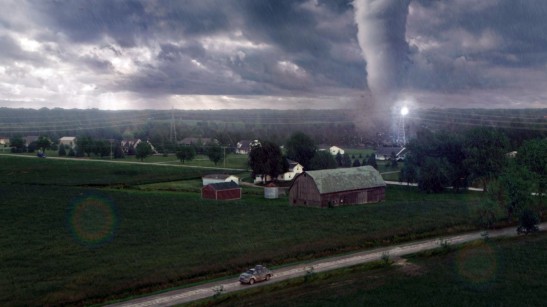 In all honesty, I had my eyes on the screen so firmly that I didn’t register how tacky or genuine the effects were; I was just enjoying them. One scene sees murky clouds rotating slowly which suddenly burst into a funnel that whips down towards the ground. Another sees sister twisters which split multiple times, creating a living hell between the ground and sky. And of course, the tornado that flattens a gas station inadvertantly sucks up the flames and becomes a dangerous ribbon of fire.. 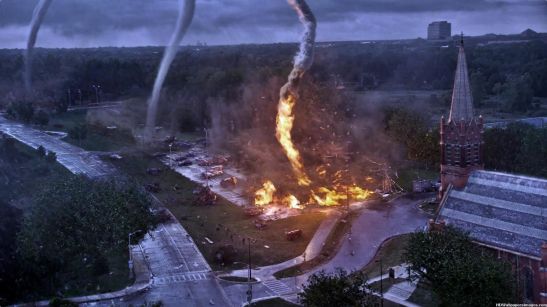 I was loving every second. It was stupid – yet wonderfully feasible – and my reasoning for how the producers spent so much effort on the special effects was down to the very low-budget filming process. Into The Storm is filmed entirely on handheld / surveillance camera, from the points of view of various characters. One of those Chronicle style movies where the scene jumps from one person’s videocamera to another, sugar-coated by the story of the main teenage character creating a ‘time capsule’ for the future. I’m not sure this was the way to go though; having the feature played out by means of ‘found footage’ – it was an obvious, “we’re going cheap in order to spend money on the effects” message from the director. But that aside, I was fully focused on the monstrous weather taking place and relishing every second. As airplanes are tossed into the air like leaves, each main character embarks on his or her own mission to get themselves / loved ones to safety.
Which brings me onto my next point..

It always has to take place in a disaster movie, doesn’t it – a father who had a rocky argument with his teenage son earlier on racing against the disaster to make it home to him. Into The Storm mirrored The Day After Tomorrow in such a tacky fashion; remember Dennis Quaid battling the horrific weather to get back to his son who seems cozily shacked up with his female love interest?.. well say hello to Richard Armitage, who races against the wind funnels in order to rescue his son who appears to be stuck in a pit which is filling up fast with water – with a female love interest.

Christ, it’s always the same isn’t it. Come on Hollywood directors, give us something different – a lady trying to make it home to rescue her cute dog, or goldfish or something. The “I appreciate my family” theme is getting boring.

..and let’s face it, until the fateful ‘flush it’ day, goldfish are rather valuable pets.

I assume the producers thought the father-saving-son plot was too cliché and cheesey to miss, so they put it in on purpose.
Well done guys.

Sarah Wayne Callies famed for playing Lori in The Walking Dead doesn’t escape the zombie series easily – shown in a scene during this movie, which actually made me laugh. At one point, during an oncoming tornado mass, Allison approaches two daredevil documentary producers (the most irritating things to happen to the movie) who appear to be sitting on a bench in a deserted street, waiting for the tornado to hit them. When she warns them to get to safety immediately, one of them replies, “have you seen it out here? It’s like a zombie apocalypse!”.

I sniggered.
I had to.
I’m just wondering how many other audience members picked up on this reference.
It’s thrown at her quite quickly, so see if you can spot it. 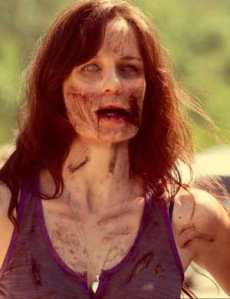 Twisters hit the locals all throughout this movie. And these twisters are bloody weird. They hit the ground, do some serious sucking, then vanish back into the sky. This isn’t your average Twister style movie, it’s slightly different – it delivers the ferocious weather with a more slick, exciting turn.
One scene sees Allison clutching the door of her vehicle as she is lifted into the air, being pulled towards the tornado which is spinning around behind her.. suddenly it vanishes, she drops to the floor. These tornados are literally like giant vacuum cleaners – whizzing along, sucking things up, then dropping them when they’re ‘switched off’. It’s all very eventful though, you won’t be disappointed – viewers get their share of constant action and stormy carnage. As I mentioned above, I think the director mean’t to spend 90% of the budget on special effects to keep the audience entertained. And it worked. 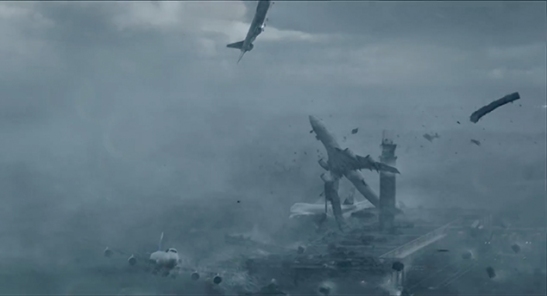 My only grumble with the movie is it seems to be focused on just one tornado; the storm chasers and civillians seem to be completely infatuated with the stonker which rips its way through the next town, rather than the multiple twisters and ‘firenado’ that engulf the area around them.
This movie – despite some brilliant graphics – was very different to what I thought it would be, because in the end it was only about the handful of people chasing that one tornado.

During the scene where the storm hits a school, graduating students are smacked by one hell of a horrific wind. My eyes were glued to the screen during this bit, it was quite intriguing and strangely exciting. 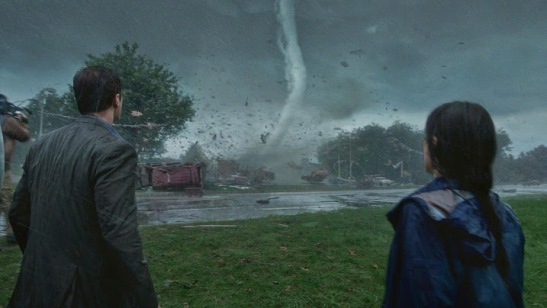 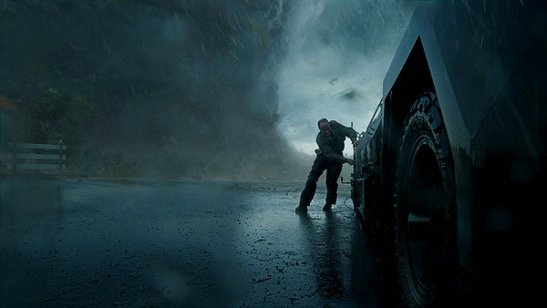 ..and then came the principal.

When the tornado passes, the school’s principal – who oddly resembles Barack Obama – staggers to his feet and (to a ripped-up hallway and students scattered in various positions) asks:

NO! Of course nobody is hurt Mr. Principal! A tornado wider than the fucking school just threw your students about like leaves. No, everyone are fine!
I love line deliveries like that. 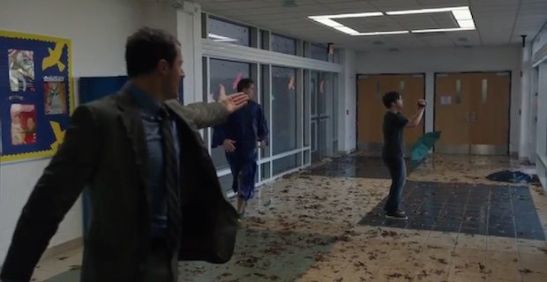 Just over halfway through Into The Storm, I folded my arms and thought to myself, “what is the point of this?”.
Don’t get me wrong, I was enjoying what I could of it – I just wondered what the overall point was.
It is like one of those movies that pops up, entertains for an hour, but ultimately fades from memory once you watch something with a bit more value afterwards. Almost like a warm-up before a concert, Into The Storm provided the kicks the audience needed (fully instigated by the special effects) before whizzing off of the screen in a whirlwind, and leaving me wanting more – wondering what was coming up next.

..then the auditorium lights came on.

This movie is incredibly random, one of those gems you’d find in a supermarket bargain bin for £3.00 that you buy on a whim for a quiet Saturday night – and once the ending credits roll, thank god you didn’t spend more on it. But hey, who knows what the point of it was – fact is it entertained for a little while.

Into The Storm wasn’t overly bad. Very cheesey, very random, nowhere near groundbreaking. For what it lacks in plot it more than makes up for with its winning quality of special effects / CGI, delivering a whole load of deliciously silly weather mishaps. The firenado was just brilliant.
If you’re thinking of going to see this, my advice would be: DON’T take it seriously. And definitely don’t expect stories / characters you can sympathise with. Sit back, open your imagination and enjoy the special effects. These are by far the only elements of the movie worth watching it for.

Be prepared for some serious sucking.

..yes, I’m referring to the tornados. You dirty bitches.

This entry was posted on August 24, 2014 by rickysfilmreviews.