The Manzoni family are far from your average neighbours. In fact, if you stay with them, you’re best off swapping laundry for bomb disposal, mowing the lawn with fraud, ditching homework for homicide, and garden parties for stashing dead bodies under the floorboards..

Yes. The Manzoni family are far from your average neighbours.

..but it wasn’t until the day they snitched on The Mob, that their lives changed. The family were forced into witness protection, and sent abroad to go into hiding – in western France. Of course, all they had to do was blend in.

Unfortunately for the Manzoni’s, old habits die hard. Their heavy-handed way of dealing with things in the neighbourhood has been noticed. And now someone out there knows where they are. And he wants payback…

Well. I can categorically state that The Family was gobsmackingly SHITE. After seeing the trailer a few times, I was all geared up for a nice slice of suburban-family-turned-gangsters frolic. Instead, what I got was a half-narrated story about a father’s criminal background and how he grew up, mixed with a bit of the action I wanted.

So what went right..?

As always, I give a fair and honest review, so read on to find out.

The family as a whole were cast brilliantly; Michelle Pfeiffer and Robert De Niro are very believable as wedded couple Fred and Maggie. Slightly scraggy and grey, they’re actually suited to each other splendidly. Is Michelle getting better with age?.. because any role she is cast in these days, she slides into effortlessly – delivers without fault. Her Fabulous Baker Boys and Dangerous Liaisons days are well and truly over; Michelle Pfeiffer has become a valuable actress who has truly earned her place in Hollywood.

And now for De Niro. The ‘can I borrow you for an hour or so’ of Hollywood returns as a father figure. Which to be honest, he plays rather well – his face is becoming more ‘caring old father’ with age. As father Fred Blake, he gives us the classic ‘lovely little old man, until you get on the wrong side of him’ personality. Which in a few of the scenes, is hilarious. De Niro is 100% suited to a role like this (unlike a few other movies he’s been in this year).

You know when I think about it, Robert De Niro used to be a well-respected valuable actor who graced the screen in hits such as The Godfather, and Taxi Driver. Now however, he seems to have become the ‘borrowed old boot’ of Hollywood; directors slip into something more cozy with this familiar man, so throw him into anything and everything, instead of getting a new actor to fill the role – I say this in total seriousness, because if you’re a frequent cinema-goer, you’ll see him popping up all over the place (current features directors have put him in include Red Lights, The Big Wedding, Freelancers and Silver Linings Playbook).

Mr Robert De Niro used to be a novelty; a nice addition to a film who packed a punch or two. Nowadays, he’s being thrown into anything a director needs a silver-haired, gangsta-style gentleman for. Poor sod.

The kids; Belle and Warren are good. Belle (played by Dianna Agron) is a virginal beauty who does everything by the book, until someone (usually other kids) pisses her off. Then her beautiful image is splintered, as the baseball bats come out and a victim’s face gets smashed in.. 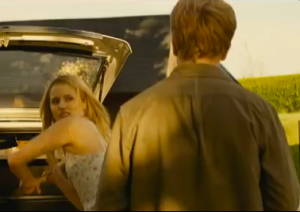 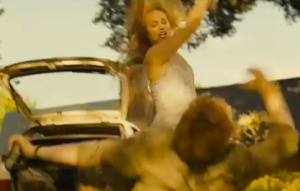 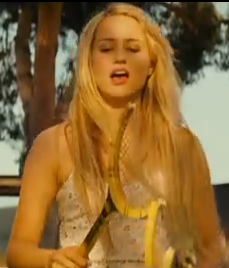 Warren (played by John D’Leo) is something of a criminal mastermind; drug-dealing and beating the shit out of high school bullies are just two of his school lunch break activities. I was quite surprised in one scene, where he properly cries at the sight of something – it was very good. 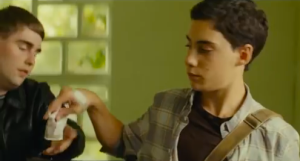 It is not quite clear if the Blake family are practised in French – but considering the stuttered “errr…oui” moments, and the fact they speak total English to their neighbours / friends, I’m thinking they don’t speak French.

..which is why I was very surprised during the supermarket scene. When Maggie goes to do a food shop for the kids, she confronts the shop manager and asks for peanut butter. The manager points her in the direction, then turns to his fellow local shoppers and the group of them mock the Americans – jesting that the residents of USA are obese and stupid, and that they seem to be taking over the whole world – even France.

Cue Maggie; leaning against a shelf listening to them intently – a look of pure resentment on her face (think Uma in Kill Bill when she faces an enemy; nostrils flared, lips pressed tightly together, protruding chin) – yes, Maggie can understand exactly what the shoppers are saying about her / Americans. Anger takes hold of her, as she then performs an act of arson which I must say, is bloody funny.. albeit ruined by the confused look on my face, as I sat there thinking, “wait a sec, I thought she couldn’t understand French?”...

I read about this in a newspaper review before I saw The Family. In a nutshell: everyone (and I mean everyone) our American family meet in France, speak English. From the random waitress who serves Maggie her café au lait in the street (who relays sightseeing details in perfect English), to the vicar at the local church, the kids at school, and the Blake’s next door neighbours, everyone delivers each word that escapes their lips in fluent English.

Having lived in France myself for a number of years, I know for a fact (unless you go to Paris) a good chunk of the French speak very little (if any) English, and usually expect the English to speak entirely in French during conversation (you have to get used to it I’m afraid).

It appears everyone in this neighbourhood has swallowed the bloody Rosetta Stone. 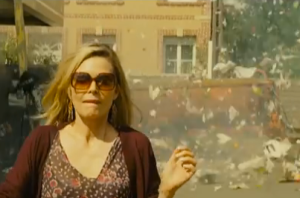 This movie wasn’t totally ridiculous, there were a few ‘LOL’ moments. Thank God. The director got it right, by bordering on insane. For example, when Fred is faced with a crooked plumber who tries to shake him down, Fred takes a baseball bat – and then a mallet – to him. And then of course, a trip to the local Mayor’s office erupts in an employee being bent over the desk (oo-er) and Fred slamming the desk drawer repeatedly on the man’s hands.

Each violent scene explodes with such nastiness, that its pretty damn shocking. You know those films / television programmes where a character suddenly roars and beats the crap out of the person in front of them – but it turns out this is just in their imagination as they stand there smiling? Well, we get it for real in this movie.

Honestly, without the ‘LOL’ moments that did happen, I probably would’ve hated this movie.

The movie continues with each family member breaking off into their own story. Fred (Giovanni) claims to be a history author, and tells the neighbours he is creating a book based on the Normandy landings – which actually lands him in trouble, as they know more about the event than he does.. somehow he wriggles his way out of this difficult situation, using the distraction of a local plumbing issue..

The water which comes out of the faucet is brown. But after an unsuccessful trip to the Mayor’s office, Fred takes matters into his own hands – culminating in an explosive scenario.

Daughter Belle (after having made her mark in the school, by hospitalising a fellow male classmate) suddenly falls in love with a college student who is substitute teaching a math class; after faking her way into the class, she subsequently nails him. All seems peachy – until the man tries to call it off. Then there is Hell to pay.. 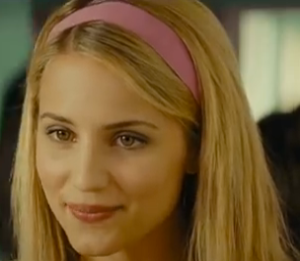 Wife Maggie begins to attend church and quickly becomes familiar with the friendly local priest (Christopher Craig). The two of them have a good relationship.. until the day he coaxes her to take part in confession. Because the next time she walks through those heavenly stone doors, she is immediately pounced on by the priest and (in more un-godly language) is told to get out and never return.

But like the supermarket fiasco, will the church go up in hellish flames?.. 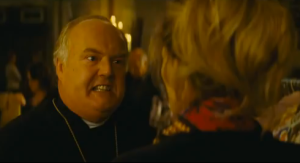 Bad Guys Pick Up The Pieces

It isn’t until the very end of this movie when it picks up pace. The night the five-men hitman team show up, is when things kick off royally. Maggie is first to notice strange, black figures blocking key locations in the village, and realises their time may be up. As the hitmen prowl the area, she runs to the safe house across the street from her own, to take shelter with the two FBI agents resident inside.

This is honestly the only part of the entire movie I was captivated by. A gunfight (involving all family members) takes place in the streets, turning a beautiful sleepy village into a roaring fireball. Thank God for these characters – seriously. Up until this scene, I was bored shitless. But these Goodfellas-style men swagger onto the set and certainly add a brilliant slice of action; overall the peaceful village with a night-time backdrop, and mafia boys creating an air of claustrophobia is intriguing, and keeps you on your toes.

Thank God the bad boys arrived. Because without the five of them, The Family would have sunk even lower in my opinion.

I don’t know if any other audience members noticed this, but one scene was just plain confusing! Somewhere around the beginning of the movie, Robert (Tommy Lee Jones) the FBI agent responsible for the protection of the Blake family knocks on the front door. Fred gets up from the dinner table (remember that – dinner table) and goes to answer the door to him.

After their conversation ends, he closes the front door, turns around – and Maggie is sat up in bed reading a book.

Yes – he closes the front door – turns around – and suddenly he’s upstairs in their bedroom.  I’ve never seen anything so bloody random in a movie!!

Perhaps this was supposed to be like this; to show how long Fred was talking to Robert for – you know, so long that the family had gone upstairs to bed. That bit I can understand. But him turning around from the front door to immediately face Maggie in bed?..

Overall, The Family is watchable. But forgettable. I think its rather half ‘n’ half and not worth making a huge effort to see. One of those movies you slide back into its case, with a completely expressionless look on your face – neither won over, or let down. The movie just simply – happens.

The trailer gives the impression that you’re in for a rip-roaring ride of criminal antics. But unfortunately, it is a total let-down. It was almost painful having to sit through this mish-mash of disjointed ideas a director threw together. Oh, the potential is there – it just didn’t make an appearance.

I wouldn’t sit through this again even if you offered me oral sex to do so.

This entry was posted on November 25, 2013 by rickysfilmreviews.