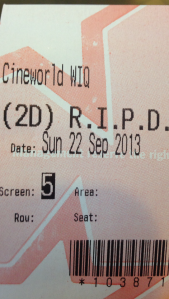 The saying ‘what goes up, must come down’ has never been truer..

Our movie opens with Nick Walker (Ryan Reynolds) rolling around on his bed with wife Julia, (no need to cover the kids eyes – theres no dry-humping) him promising her a happy, long-lasting life. But that’s all about to change.. because Nick carries a secret: whilst on a drugs bust with colleague Bobby Hayes (Kevin Bacon) they both came into possession of a chest full of gold – which Nick buried in his back yard – but he’s had a change of heart, and decides to turn the gold in. He tells Bobby this.  However, later that day whilst on a Police raid at a local warehouse, Bobby backs Nick into a corner – up high on a walkway.. and guns him down.

First off, the entire movie is incredibly watchable. Its not brilliant, but its not dire either – R.I.P.D. is one of those films you can rent, leave running on a Sunday afternoon whilst you’re hungover, and give yourself a jolly. I’d liken it to Men In Black – you know, two suited officers running through the streets, whilst laser-gunning down chubby monsters whose heads seem to be made of elastic. (its just not as shit as Men In Black)

But the element that keeps this movie together, is the partnership.

Reynolds & Bridges – A Match Made in Purgatory

Jeff Bridges’ character Roy is just superb, his Wild West personality is hilarious: Cowboy swagger, Texas accent and overall “I don’t take no shit, boy” attitude had me LOL’ing throughout. Ryan Reynolds as Nick however, is cute and husky – speaks in a hushed tone and remains the complete straight-laced mirror opposite to his partner.  The entire movie is carried by these two, and it was nice to have that young / old, mature / wacky mix. What a pairing.

The Good, The Bad, and.. The Not So Good

The only downside to this movie is the way in which the story matches Bridges’ driving – speeding off in all directions. Its a good thing that the story unfolds immediately, however, 2-3 scenes seem to spiral off into nowhere – an example being Roy & Nick in their car – almost like the director needed a time-filler so filled it with the pair discussing how Roy’s name is pronounced.. before stopping and suddenly having Roy play a concertina by a riverside!? Odd.

When Nick died, he woke up – got pulled into the sky and was on his way to the afterlife. However, whilst ascending through the strange tunnel of light, he got pulled into the office of (so sarcastic it makes her LOL material) Mildred Proctor; director of the Boston R.I.P.D. (Rest In Peace Department) The R.I.P.D. specialise in capturing ‘Deados’ (spirits that failed to cross over, and return to Earth as vile phantoms disguised as everyday humans) She propositions Nick – continue to ‘final judgement’, or join the R.I.P.D. 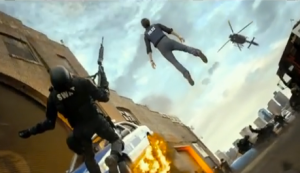 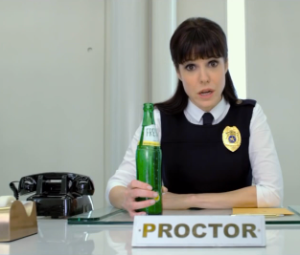 The story in itself is to be applauded. It touches on that classic question we’ve all asked at some stage: “what happens after we die?” – this aspect of the movie kept me intrigued, and the special effects as Nick leaves his world and his journey to the next one were fascinating.

The moment Nick wakes up after his death, he walks through the place where he was killed – the warehouse and its siege setting. And its kind of beautiful.  Everything that took place the second he died is frozen; the explosions of fire, cars flying through the air, people falling – its all solid. As Nick get pulled up into the afterlife, he passes an aircraft which is caught in suspension also.  I revelled in this part of the movie. Non-movement special effects, the fascinating dynamic of something huge going down – but frozen momentarily. Lovely use of special effects there.

So Nick & Roy have returned from death to chase down ‘Deados’ – but how do they appear to the general public?..  as a tall, busty blonde and a stumpy Chinese granddad of course. Members of the R.I.P.D. return to Earth in disguise, and these two couldn’t be more of a funnier pairing.

Played by James Hong and Marisa Miller, Nick & Roy are perceived by humans as Jerry Chen and Opal Pavlenko; the most unlikely couple you would ever see together. But they’re bloody funny. I like this – two unknown actors (or who we have never seen in the movies) slapping the screen with some great hilarity. My only gripe is that they’re just not in it enough.. yes, they are ‘makeup’ for our two heroes, but the director seriously needed to use them more. Marisa Miller especially; her dry yet super-foxy appearance was stunning.

One scene sees Nick and Roy have an argument on a roadside – and the result?..

Nick picks Roy up and throws him in front of passing traffic. But obviously, to humans, this may appear rather strange..

What is it about Ryan Reynolds and his dashing appearance? I mean, he’s no Gerard Butler, he’s not as macho as Mark Wahlberg, but there’s something about this man that is scorching. I can’t figure out his eyes; at first I thought he was slightly Cantonese (yes go on, have a good laugh) but then I thought “perhaps they’re just closer together than most people’s” – whatever the deal is with his eye-spacing, he’s bloody attractive. 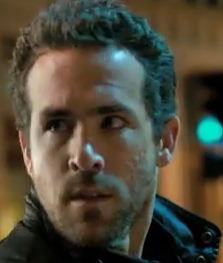 Overall, R.I.P.D is a hoot. Don’t expect too much, and you won’t be disappointed. At nearing £10.00 a ticket for cinema, I’d leave it and wait until its out on rental. 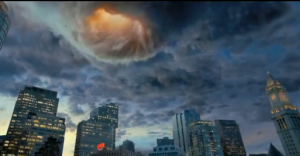 This entry was posted on September 23, 2013 by rickysfilmreviews.