IT’S BACK.  But for better or for worse?…

Insidious 2 opens in that classic ‘title-flashing-in-bright-red, suspense-filled’ style; with screechy music (think Drag Me To Hell) – I liked this. A traditional “oh shit…aagh” kind of audience reaction.

Its 1985, a young blonde woman gets out of her car and walks up the steps to a house. The Lambert residence.  Her name is Elise, and she’s there to begin investigating a family problem which is about to follow them for the rest of their lives..

Welcome back to Insidious.

Just superb. In many horrors, you find the young blonde / brunette females all look the same – the blokes are always buff and cocky, and you can clearly see the cast have been cherry-picked for their looks.  This is exactly where Insidious reverses the process – and delivers. Because unlike most of these other horrors, this cast can actually act.

Lin Shaye – the unsung gem of Hollywood, thank God she returned for number 2 – it just wouldn’t have been the same without her wide-eyed expressions and off-the-wall characteristics. (and the actress who plays her younger self is amazing – they actually used a girl who isn’t similar – but who you’d think was actually the younger Lin Shaye!)

Rose Byrne – the incredibly versatile Australian actress delivers a winner again. There really is no stopping her talent, is there? She’s dappy and British in I Give It A Year, a total snob in Bridesmaids, yet Insidious gives us this family-orientated stressed out American mother.

Barbara Hershey and Patrick Wilson only add to the sparkle; create the icing of this ensemble of cast splendidly.  As for the ‘little ones’ – brilliant.

Now lets get down to business:  Was it worth them making the sequel?..

My first observation: It is not as scary as the first one.

Sorry to disappoint you people, but its just not.  We obviously get a few good jumps, but I’m afraid this is where the ‘shit-scary’ ends. This prequel-sequel is more about the story, the family getting to the bottom of who is haunting them and why. Therefore, we see a lot of “I know this place. I’ve been here before” tosh (then a character gives us a 10-minute sum-up of a few years of their life, for example) 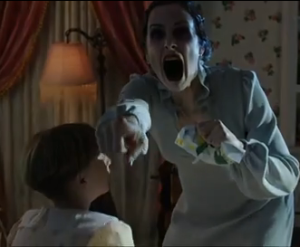 Now the beauty of Insidious Chapter 2 is the tension it creates. We all know what sort of category this movie falls into, not to mention who its director is.  So I literally sat, squinting – head bowed as if something was about to jump out at us – which is brilliant. That’s the sort of rush you want from a movie – intensity.

The movie continues as we delve deeper into uncovering the link between the family and the spirits, and flows with tension. Toward the end, it blends nicely between Insidious 1 & Insidious 2 as some of the going’s-on from the first one are explained – this part of the feature (where the husband jumps from number 2 to number 1) is quite clever, and had me thinking “aaah, gotcha – so that’s why that happened in the first one”

Overall, the story is what I would describe as clever. Ghosts in photos are obvious when explained, and its the whole time-travel aspect which ribbons this movie with the kick it needs; it intertwines the family’s timeline superbly.

The setting of the after-life is a brilliant idea. The whole misty dream-like surrounding is scary, and those people (spirits) in purgatory who are frozen solid, yet you can see moving slightly – gives the whole ‘suspended in nowhere’ feel.  But the parallel world idea is ingenious; a world that is here all around us, its exactly where us living are right now – but its invisible. Its where the deceased are.  In Insidious, the afterlife is smoky, grey and cold – the void between living and the next place. Purgatory, basically. Where the deceased are wandering freely around us and talking to us – but remain invisible & inaudible. Its our present. Our home, garden, park, seafront – but with the lights turned out.

Insidious 2 may not be as jumpy as the first, but it creates a fantastic tension throughout, and by God its cast ensemble are superb. The plot / setting ideas are to be applauded.

Oh, and remember the scary white-faced ‘bride’ from the first one?  We find out exactly who she / he is… 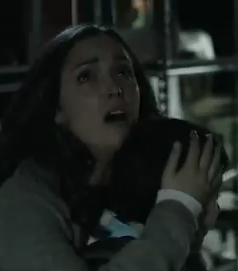 Worth watching. Worth paying for.

This entry was posted on September 14, 2013 by rickysfilmreviews.